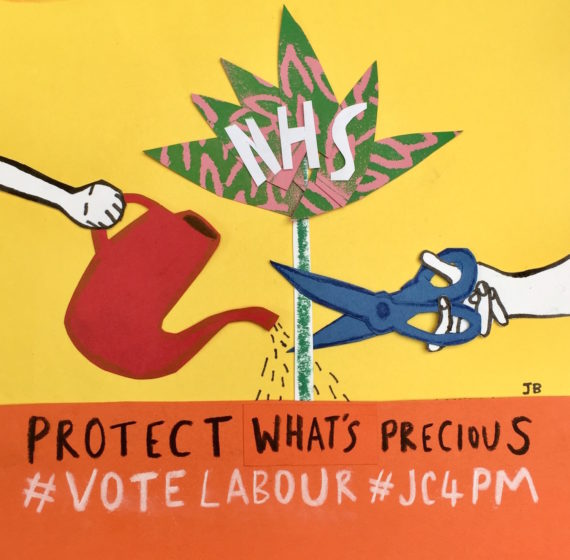 Described by Alan Johnson on Radio 4’s the World at One as “surprisingly interesting and even exciting”, the ‘snap’ election has inspired a great number of responses form artists, designers and artist-led groups across the UK.

The most talked about poster has of course been Jeremy Deller’s Strong and stable my arse but there have been plenty more, many of which have been posted on Instagram.

Announcing she was getting her “political cap on”, Josie Brookes created the collage, above, highlighting two possible NHS future scenarios.

DOWNLOADABLE POSTER NOW AVAILABLE !!! ‘Just email [email protected] with your request and we will send a digital poster-sized version to print at home !

Rob Ryan’s downloadable The World Is Not Perfect poster is available to print at home and display.

“A race against time to defeat a rigged system” is how the team behind CorbynRun describes its downloadable game pitching the Labour leader against bankers, the Tory battle bus and Boris Johnson on a zip wire.

About 900,000 children from struggling families will lose their right to free school lunches under a cut unveiled in the Conservative manifesto. May opted to end universal free school lunches and replace them with free breakfasts, which according to the Conservatives would cost £60m a year. But critics have calculated that if the country’s 4.62 million primary school children attending state schools were to be fed a free breakfast on this budget, each meal could cost no more than 6.8p #dontvoteconservative A post shared by @keepitcomplex on Jun 1, 2017 at 1:55am PDT

Also posted by Keep It Complex – Make It Clear, this poster highlights Conservative plans to replace free school lunches with free breakfasts on a budget, by spending just 6.8p on each meal.

Finally, Jay Cover’s Go Vote! was originally designed to get people to register to vote, but as election day looms it’s a simple reminder of what to do on Thursday 8 June.

Polling stations open at 7am and continue to 10pm – use your vote.