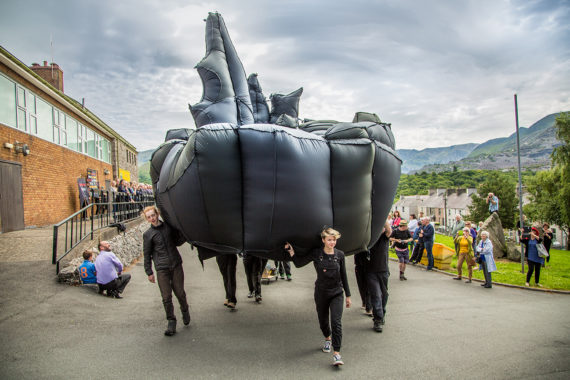 In 2015 the National Trust, in partnership with Arts Council of Wales, created a three-year residency programme for artists to explore cultural material and stories connected to Penrhyn Castle, one of its properties situated in Gwynedd, near Bangor in North Wales.

Glasgow-based artists Walker & Bromwich (Zoe Walker and Neil Bromwich), who are well known for their large-scale sculptural works as well as participatory events and exhibitions, were selected for the third and final phase of the project which commenced in November 2016.

‘Slate or State’, Walker & Bromwich’s resulting exhibition and community engagement project, took inspiration from a painting by Henry Hawkins (1822-80), The Penrhyn Slate Quarry, which adorns the castle’s interior and depicts a romanticised view of working conditions at the quarry.

The painting is part of an impressive collection of fine art housed within the castle’s opulent interior, but as Penrhyn Castle’s General Manager Nerys Jones explains, “under the surface lies a dark history of slavery and bitter industrial dispute”, untold by the Hawkins’ painting. 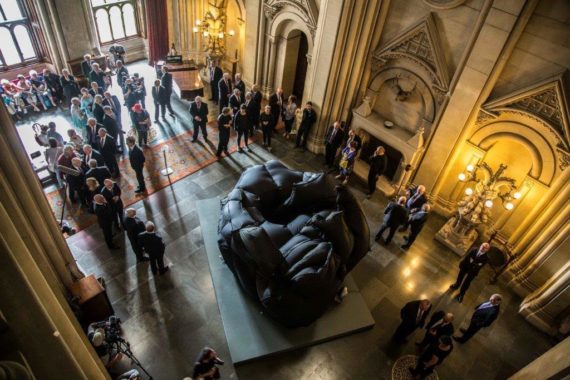 Now installed in the castle’s Grand Hall, ‘Slate or State’ marks the culmination of Walker & Bromwich’s residency, but also reflects the National Trust’s continued plans to involve the local community in how the castle’s history is told and interpreted.

The 15-foot inflatable work represents the slate face near the village of Bethesda, a place of significant turbulence during The Great Strike of Penrhyn of 1900-03. The bitter dispute between quarrymen from the village, their employer Lord Penrhyn (Edward Douglas-Pennant) whose ancestral home was Penrhyn Castle, and his agent E A Young, was the culmination of several years of dissatisfaction and unrest in the area.

Centred on union rights, pay and working conditions, tensions came to a head in 1900 when Lord Penrhyn pressed charges against 26 quarrymen following an assault on contractors who had struck a bargain with their employer. When the matter came to court, 800 Penrhyn quarrymen marched to Bangor where the case was being heard, and whilst only six of the accused were found guilty, all those that had supported them were suspended from their work for two weeks. 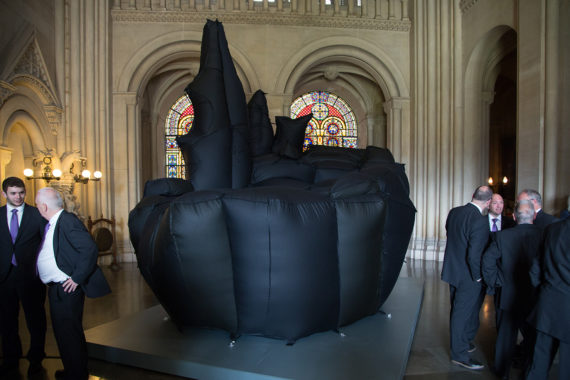 Three days later on 22 November, 2,000 workers arrived at the quarry as usual but refused to work until the suspended workers had been reinstated. Young offered them an ultimatum to “go on working or leave the quarry quietly”. They walked out and the The Great Strike of Penrhyn began.

A month later Young offered new terms to the quarrymen, but only 77 workers accepted.

The community was further shaken in June 1901 as 2,000 quarrymen moved to find work in South Wales. Others remained and at this time the men who accepted terms from Lord Penrhyn received a sovereign each and the promise of a 5% pay increase. This would be known as the infamous ‘Punt y gynffon’ (The tail pound). It marked a divide in the community; between those who returned to work and those who continued to push for unionisation. 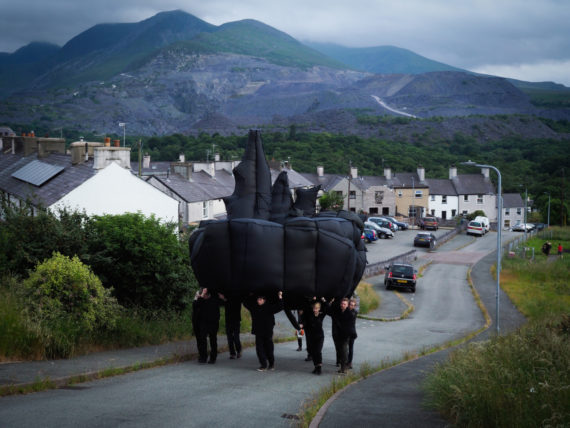 By the end of 1901 Bethesda became desolate; poverty took hold with lack of work, money and food. 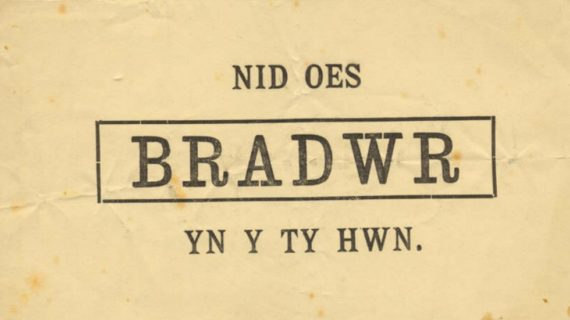 Yet each striking family continued to display solidarity with posters in their windows bearing the words Nid Oes Bradwr yn y Ty Hwn (There is no traitor in this house). 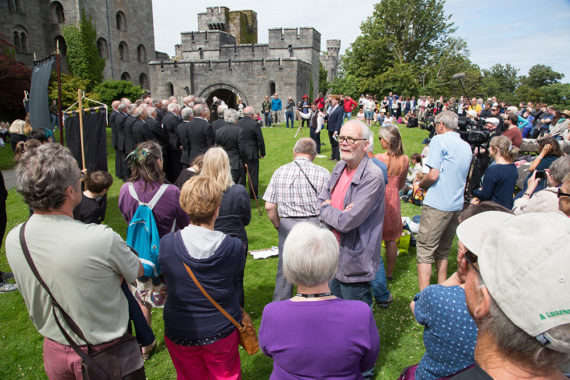 ‘Slate or State’ opens up contemporary discussion about the Bethesda community’s ongoing contentious relationship to the castle. 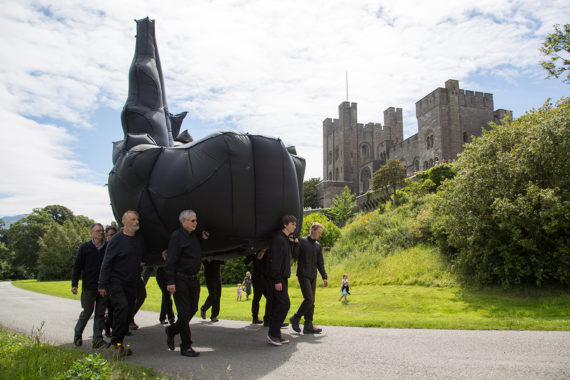 “We wanted to explore this history and give it a place at Penrhyn,” explains Walker, “to tell the story within the walls of the castle itself and reflect on its relationship with the local community.” 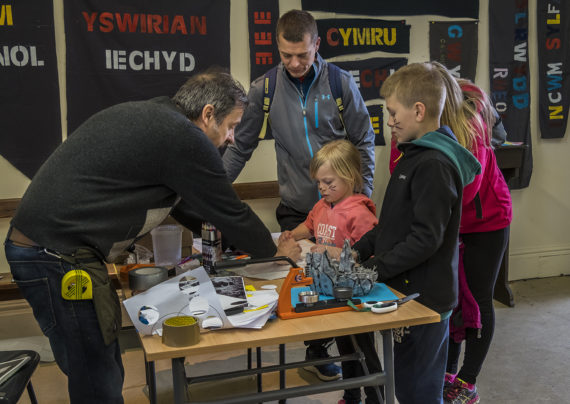 The artists worked with the community to create banners for a procession on Saturday 1 July 2017, which saw the sculpture transported from Bethesda to the castle’s Grand Hall. 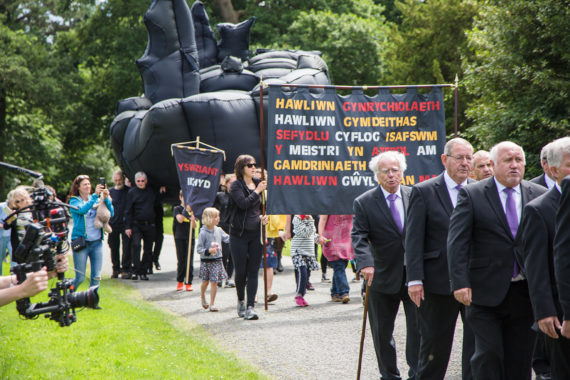 The procession followed the same route the quarrymen marched during strike action. 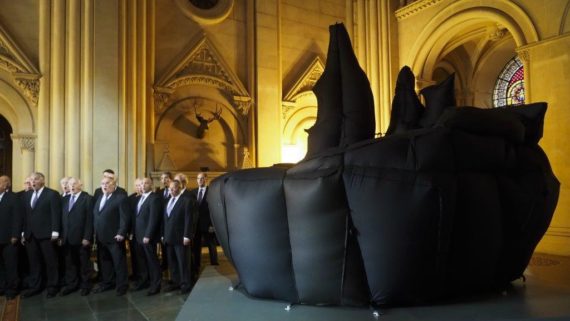 In the Grand Hall the procession was joined by a performance from the Penrhyn Male Voice Choir, who sang traditional songs including ‘Strydoedd Bethesda’ (The Streets of Bethesda), which describes hardships endured by the quarrymen.

Walker & Bromwich have also produced a video featuring local voices, poetry, choral singing and archive material to explore the story of the strike, the history of which, as Walker continues; “resonates with contemporary political issues and struggles between power, wealth and poverty.”

Slate or State continues in the Grand Hall at Penrhyn Castle until 5 November 2017. nationaltrust.org.uk/penrhyncastle

Walker & Bromwich are among the artists commissioned for this year’s Edinburgh Art Festival programme, The Making of the Future: Now. edinburghartfestival.com