Project Space Leeds: "It's all there for the taking" - a-n The Artists Information Company 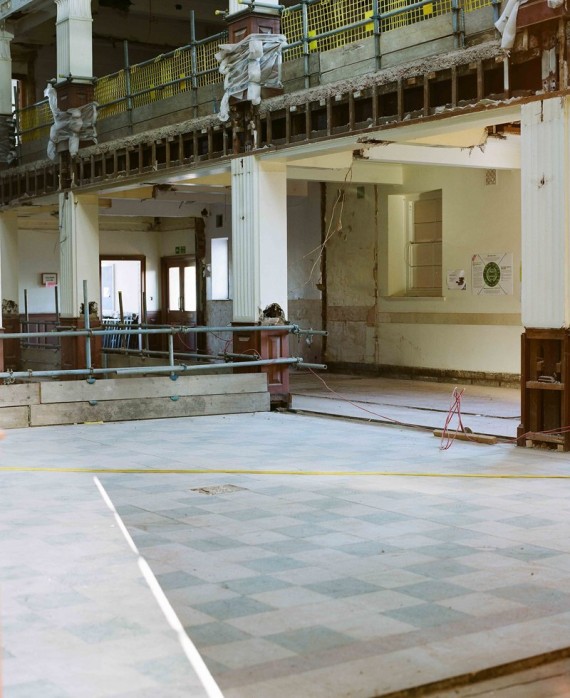 For co-directors Pippa Hale and Kerry Harker, themselves artist-curators, the remit of PSL (Project Space Leeds) has always been to provide local and regional artists a ‘step up’ to the next level career-wise. It’s an approach informed by their own experience in Leeds, and it was to remedy this gap in the city’s arts infrastructure that they founded PSL in 2006.

Based for the past five years in a temporary space at Whitehall Waterfront, they’re now looking forward to a more permanent set up in a new venue in Leeds – The Tetley. The building has just been awarded £225,500 from Arts Council England’s Small capital grants programme to support its conversion into a contemporary visual arts hub, and is due to open later this year.

“Everything’s right, the relationship’s right with Carlsberg – they needed us, we needed them,” says Hale. “In terms of footfall and generating income it’s all there for the taking – we just have to do a decent job.”

The 1930s former Tetley Brewery headquarters is rich in historic features, with mahogany-panelled rooms, original lift, two war memorials, grandiose rooftop signage and a newly reopened central atrium. A significant shift in scale and potential for PSL, it will provide a dramatic backdrop for artists’ work with a multitude of interesting rooms and a vast canvas wall in the atrium.

The funding from ACE will help create high-quality showing, learning and resource spaces and community facilities. A ground floor cafe-bar – stocked with speciality beers – will enable PSL, now a charity, to generate income from commercial activity, contributing to its sustainability in the longterm.

The building comes with the Tetley archive, of which PSL will be custodians. Ripe for artists and curators to respond to, the archive and ‘heritage’ aspects are already generating local interest, as Harker explains. “We ran some heritage open days and had lots of ex-brewery workers visit – people who’d worked here going right back to the 1940s. People care about the building and are happy it’s going to have a new life with public access, that it’s going to be preserved and not turned into luxury flats or a boutique hotel.”

These crossover functions – the café-bar, preserving the building’s history – will help bring diverse and new audiences to contemporary art. “We’re very well positioned for audiences,” says Hale, who is also Director of the Northern Art Prize. “We’ve got the enormous car park at the back, lots of flats and businesses around, Asda and O2 headquarters, a retail park and nearby train station and bus station.”

At the heart of the project is the strong relationship between PSL and Carlsberg UK. Having ceased production at the site in 2011 amidst a good deal of local controversy, Carlsberg wanted to do something with the Tetley building as part of decommissioning the large industrial site. On the look out for a new venue, Hale and Harker viewed the building and immediately saw its potential.

After pitching their ambitious vision to Carlsberg, things quickly moved forward. Carlsberg have supported the building’s retrofit and are leasing it to PSL at a peppercorn rate, allowing them to concentrate on developing their creative enterprise.

So, what will the new PSL mean for local artists? “It’s still very much a grass roots, bottom-up approach, taking the PSL work ethic with us in terms of inviting people to work in the spaces and be experimental and innovative,” says Hale. “We’re not about having big-name artists come in – we might have a big artist but it’s about how that would fit with the context of all the other artists and how that benefits the artists that live regionally or locally.”

So PSL will continue to create opportunities for artists based in the city and region to develop and show work – and of course, the remit to provide a ‘step up’ remains.

On the evidence of the hard-hat tour, it’s a big building project with some way to go. But with strong relationships and investment from the private as well as public sector, combined with the vision and clear-minded approach of Hale and Harker, it’s on a sound footing.

“All this is about trying to find a way of becoming more financially sustainable,” says Hale. “The more successful the organisation is in terms of generating income, the more work we can do with artists.”

Shifting practice – part of the a-n Collection series, guest edited by John Beagles and Paul Stone, that takes the artist-led initiative as its starting point

Gillian Nicol is Head of Programmes & Editor at a-n The Artists Information Company.