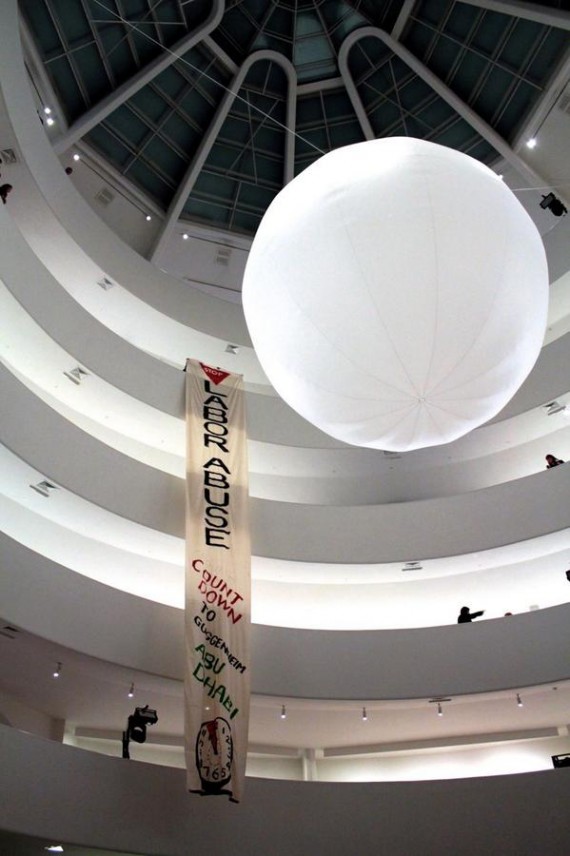 Gulflabor, a coalition of international artists, marked their sixth protest in a year at New York’s Guggenheim on Thursday night, with a concert of pots and pans. A chorus of approximately 20 activists greeted guests arriving for one of the museum’s biggest fundraising galas.

With tables going for $75,000 dollars each, the campaigners highlighted the vast discrepancy between the fine dining of New York’s black-tie patrons, and the deplorable working and living conditions that the migrant workers building the Guggenheim, the Louvre, and the Sheikh Zayed National Museum (in collaboration with the British Museum) in Abu Dhabi, are alleged to be experiencing.

Through creative action and a petition, the group is calling for the Guggenheim to work in partnership with the UAE Ministry of Labour to end alleged labour infringements and human rights abuses through the implementation of a number of demands, including use of the Institute of Human Rights and Business’ recently drafted Dhaka Principles as a framework for making the changes.

While the Guggenheim is said to have insisted on certain labour agreements, Gulflabor asserts that practices such as recruitment fees, relocation costs and passport confiscation still take place, thereby circumventing and undermining existing legislation.

A host of high-profile artists including Andrea Fraser, Hans Haacke, Thomas Hirschhorn and Walid Raad have voiced their support for the campaign through participation in the recently completed ’52 weeks’ project. Over the course of a year, artists, writers and activists contributed works, texts and actions that highlighted the conditions of the culture industry’s migrant labour force in the UAE.