Peter Fischli: "A minimum gesture that has a maximum effect" - a-n The Artists Information Company 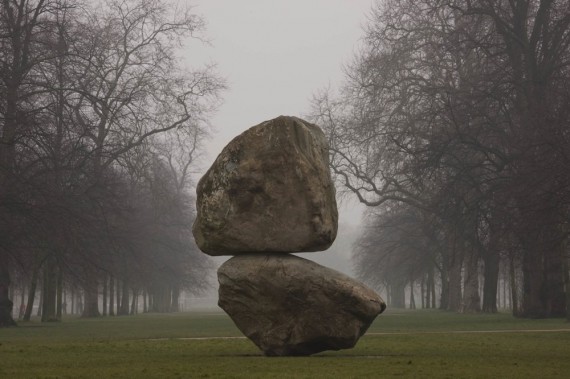 It’s a misty Friday morning in Kensington Gardens. You might expect this to add a suitable air of gravitas to the launch of the first and only Fischli/Weiss public sculpture in the UK, following the untimely death of David Weiss in 2012.

However, although Rock on Top of Another Rock has personal resonance for those involved in making it happen, this doesn’t mean the event is full of solemnity. On the contrary, the humour that abounds in Fischli/Weiss’ ouevre is apparent in the way both Peter Fischli and curator Hans Ulrich Obrist talk about the piece.

In his irreverent style that both eschews and acknowledges the philosophical weight and incidental ability of public sculpture, Obrist observes that the work is “a meeting point for Londoners. We can meet each other beneath the rocks and talk about a rock on top of another rock.”

Though monumental, it was specifically rocks found lying around that influenced the first incarnation of Rock on Top of Another Rock, in the Norwegian wilderness. Fischli and Weiss were interested in how a work, even of such scale, could become lost in the landscape to the point where a viewer might question whether the authorship was natural or manmade. The work is “a minimum gesture that has a maximum effect – you just need the crane,” Fischli explains.

Centred on the grass in front of the Serpentine, where it will remain for 12 months before moving permanently to Doha, the work changes from being a humorous suggestion of incidental mark-making, into a purposeful statement that references formal sculpture – it is roughly the same size as other public works within Kensington Gardens.

“As an artist, when you have an idea, you want to do it the next day, but with a project like this you need to know it takes time,” says Fischli, referencing Martin Kippenberger, who famously stated that ‘a good artist has less time than ideas’.

Speaking in the Serpentine’s education room, where the Fischli/Weiss photographic series Equilibres/Quiet Afternoon (1984) is displayed, Obrist’s passion for the artists’ work is evident. “It is almost exactly 30 years ago that these works [Equilibres/Quiet Afternoon] were created and that I first visited Fischli and Weiss in their studio. It was there that I decided to become a curator. I learnt everything from them.”

Fischli is currently completing several works that the pair began together. When asked how his own and the pair’s oeuvre will evolve, he says: “This is a question I have to find out – for me it is very clear that I want to finish all these projects. We didn’t have something like a company and so there is not the same strategy. I take it step by step.”

‘Rock on Top of Another Rock’ is presented jointly with Qatar Museums Authority as part of Qatar UK 2013, a year-long cultural exchange between the two countries.