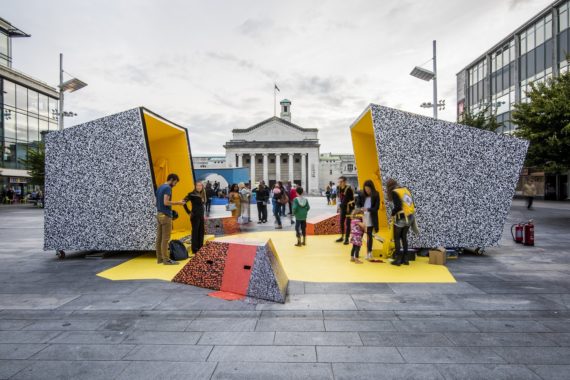 Sandwiched between Bournemouth and Portsmouth, Southampton has for some time felt like a city on the brink of interesting things. It has two art schools, one at Solent University and Southampton University’s Winchester School of Art.

As you arrive into Southampton Central Station you’re greeted by Wyndham Court, a grade II brutalist housing complex, described by writer and Southampton native Owen Hatherley as a ‘masterpiece’, and which has been beautifully captured by local photographer Tom Westbury.

Five minutes’ walk from the station and you’re at Guildhall Square, which was redeveloped a few years ago as the city’s Cultural Quarter. One side houses the Civic Centre, home to Southampton City Art Gallery with its enviable collection including work by the likes of Bridget Riley and LS Lowry.

At the other end of the square is the newly built arts complex, Studio 144. In 2018 this will become home to the John Hansard Gallery, the community filmmaking organisation City Eye, and Nuffield Southampton Theatres’ new city centre venue.

Just opposite is Solent Showcase Gallery, run by the university. There’s a certain amount of buoyant anticipation to see how having three galleries in such close proximity to each other might energise the square. 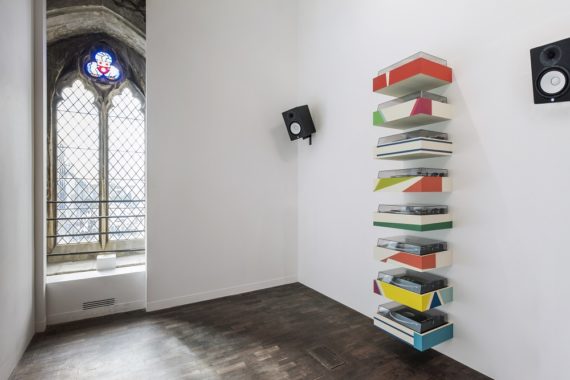 Last year, the city welcomed the British Art Show, the second time this major touring show has come to Southampton. Hosted by John Hansard and the City Art Gallery, extra space was sought in the Bargate Monument Gallery, which had been sat empty since 2012. Since then, it has been used for pop-up exhibitions by local artist Gritt and Solent University students.

The British Art Show also led to the first Southampton Fringe, a great catalyst for the visual arts. The programming including a series of artist billboards curated by UGO Projects, a pavilion in the Marlands Shopping Centre by artist Roy Brown, and ‘Art Car Park’, for which a dozen or so cars were turned into exhibition spaces in Guildhall Square. 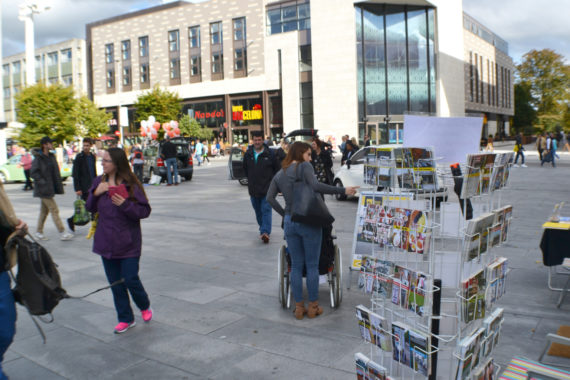 The Fringe also made use of the some of the numerous medieval vaults located within the Old Town’s city walls, previously used by ‘a space’ arts for Art Vaults, a series of installations across weekends. These are set to return in 2018 as the organisation – which recently became an Arts Council England NPO – begins building work on God’s House Tower, the former fortified gateway that forms the corner piece of the city’s ancient defensive wall.

Organisations like Southampton Cultural Trust and CHAOS Network can offer some support and expertise to new groups and there are also signs of an increase in grassroots activity. The collective Stair/Slide/Space has been running a series of workshops for the John Hansard Gallery in the city centre parks, while artist Will Wittington’s small informal murals have been brightening up disused shop fronts in the St Mary’s area of the city.

This is also where community arts organisation Unity Arts is based, having turned the front room of community radio station Unity 101 into an exhibition space. Nearby, HAHA Gallery has brought a sense of anti-establishment attitude to the Old Northam Road area, where packed out private views go on well into the night. 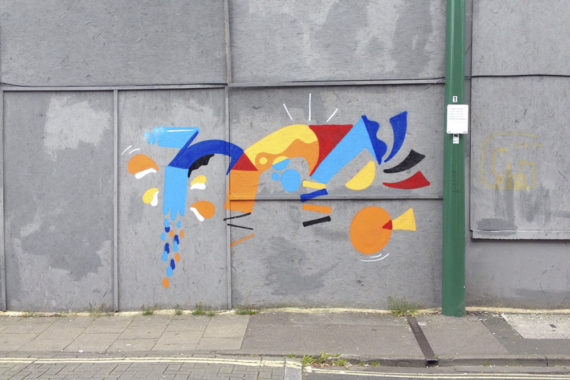 Making Out 67-17
Curated by Steve Lannin, this exhibition celebrates the 50th anniversary of the repeal of the UK’s Sexual Offences Act by bringing together objects to highlight the diversity and talent of the LGBTQ+ communities. It includes work by Alexander McQueen, Keith Haring, Derek Jarman and many more.
Until 6 January 2018, Solent Showcase Gallery, Sir James Matthews Building, 157-187 Above Bar Street, Southampton, SO14 7NN.
www.solent.ac.uk/showcase

The Observatory
Initiated by SPUD, who are based in the New Forest, The Observatory consists of two rotating charred-timber cabins that offer a space each for visitors and an artist, as part of a series of residencies. Touring four locations around the Solent, The Observatory has just been installed at its new site at ArtSway. Those interested in using the studio are encouraged to get in contact.
ArtSway, Station Road, Sway, Hampshire, SO41 6BA.
www.lookinlookout.org 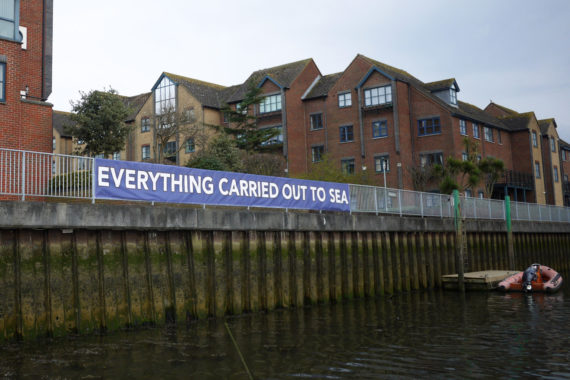 K6 Gallery
I’m part of a team of volunteers who run K6 Gallery – an exhibition space housed in a pair of phone boxes. Currently on show is ‘Imagined Futures’, a series of large-scale woodcut prints and banners by Peter Driver, that imagine an education policy for children that prioritises creativity, critical reasoning. There have also been numerous K6 offsite activities, including in 2016 a three-month arts trail that paired up 11 artists with locations along a route across the city to create temporary installations, and also commissioned a permanent mural as part of the project’s legacy.
Imagined Futures by Peter Driver, until 1 December 2017, K6 Gallery, The Phone Boxes, Castle Way, Southampton, SO14 2BW www.k6gallery.com 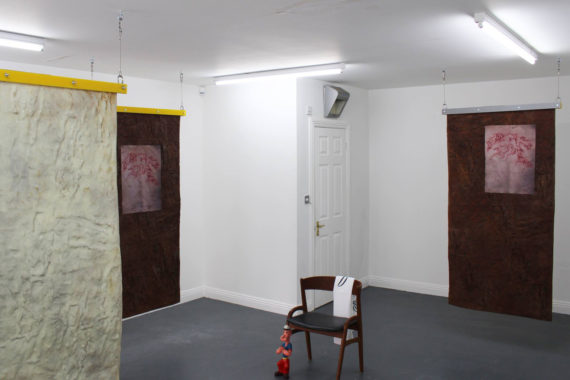 HAHA Gallery
HAHA Gallery has been a breath of fresh air since it opened on Old Northam Road in 2014. Run by Jen Harris and Liv Fontaine, it’s focused on short-run contemporary exhibitions, particularly visual and performative art by emerging artists. It was one of only two spaces on the south coast to be included in Kevin Hunt’s Hot 100 Artist Led Spaces. The programme is expected to start up again soon after a period of repose.
HA HA Gallery, 9/11 Old Northam Road, Southampton, SO14 0NZ. www.hahagallerysouthampton.tumblr.com 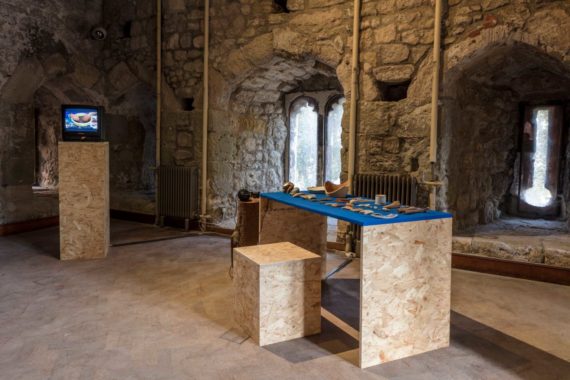 GHT: a reincarnation
God’s House Tower is the 700-year-old former debtor’s prison that is being converted into a new arts and heritage venue, thanks to funding from the Heritage Lottery Fund. Prior to building work beginning in early 2018, artist Sarah Filmer has run an 18-month long residency in the building, giving eight local visual artists the opportunity to create and exhibit work. The final exhibition last month displayed the outcomes of the residency along with a programme of events throughout the building.
God’s House Tower, Winkle Street, Southampton, SO14 2NY. See www.aspacearts.org.uk for the latest developments as God’s House Tower undergoes renovations. www.ght-a-reincarnation.co.uk

Alex Batten is a freelance arts marketeer and arts producer based in Southampton, and is director of K6 Gallery. http://www.alexbatten.net