Scottish independence, one year on: from political engagement to artistic discourse - a-n The Artists Information Company 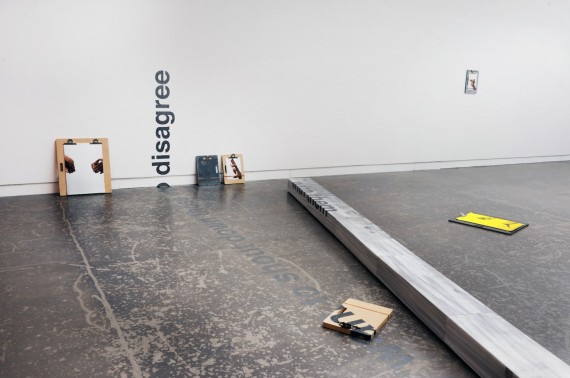 While the result of last year’s Scottish independence referendum was, on the surface, a victory for the status quo, things have not stayed the same. The debate around Scotland’s future continues – and plenty of people, such as the Scottish poet Alec Finlay, are still wearing their blue and white ‘Yes’ badges.

Finlay is one of five artists in The Shock of Victory exhibition at the CCA in Glasgow, a city that saw over 53% voting for independence. The show opened on 18 September, exactly a year on from the referendum polling day. It takes its title from an essay by the anarchist scholar David Graeber, in which he suggests that political activists fail to recognise their own successes.

Finlay’s contribution to the show, A Better Tale to Tell: submissions to The Smith Commission (2015), is a 62-page poem, presented both on the walls of the gallery and as an A5 pamphlet. The poet, though, hasn’t written a word of it.

“It’s a collection of sentences or short comments by different people, taken from their letters and emails to The Smith Commission,” he explains. “What interests me is the shift of language that happened within that period; the articulacy of people who weren’t engaged before.”

Over 18,000 submissions were made by members of the public to the commission, which was set up after the referendum to look into further devolution powers for Scotland. Their comments, though, were absent from the published report. “For me, Smith feels like the final procedure [of the referendum],” says Finlay. “The people’s voices were reduced to nothing and instead became political discourse.”

Voices, words, language – this is a show teeming with dialogue and communication, from the written and spoken word to the international language of politicians’ hand gestures, featured in Clips (2015) by Greek artist Antonis Pittas.

“When politicians are talking to the public, they use their hands to create certain images of their thoughts,” says Pittas. “I’ve collected images from the last five years, made a performance with my own hands, and created a series of pictures.”

Presented as flippable sheets on ‘clipboards’ made from sandstone (a material used in many Glasgow buildings), the work is shown alongside Landart (2012), a 9.8m marble replica of one of the steps in front of the parliament building in Athens.

Written on the gallery floor, wall and step – which dissects the main gallery space at CCA – are the words: “Some people in this room simply want to shout down those who disagree with them.” It’s a comment made during the referendum campaign, but whether the person was a ‘Yes’ or ‘No’ isn’t stated.

Pittas says he closely followed the independence debate from his home in the Netherlands. “Generally speaking, I’m always interested in places at a moment of turbulence, when something is going on, something boiling, something changing.”

Despite its inherently divisive nature, post-referendum Scotland has remained relatively free from turbulence – unless you count the collapse of Scottish Labour in the May general election. But for London-based Northern Irish artist Mairéad McClean, there was always the possibility that strong feelings might turn into violence.

“I was very nervous in a way, because of Northern Ireland,” she says. “I see a lot of similarities in Scotland in terms of the religious divide, and particularly in Glasgow. So I was almost afraid.”

“The reason for putting these two pieces of footage together was this idea of how the body works as a metaphor for a political happening,” explains McClean. “So there’s my father’s body being incarcerated and this very authoritative figure [Falconer] closing in, while at a similar time this dance thing was happening, this mind-body expansion. It suddenly came together in this very organic fashion.”

The other artists in this inquisitive and engaging show are In the Shadow of the Hand (Glasgow-based duo Virginia Hutchison and Sarah Forrest) and Palestinian Oraib Toukan. Reflecting the importance the works give to dialogue and discussion outside mainstream politics, The Shock of Victory programme also includes a symposium, workshops and events, and a week-long kids parliament.

Political, then, but not necessarily as we know it. Finlay, describing the voices in his found poem, puts it this way: “It’s not standard politics – it’s actually what the referendum was like.”