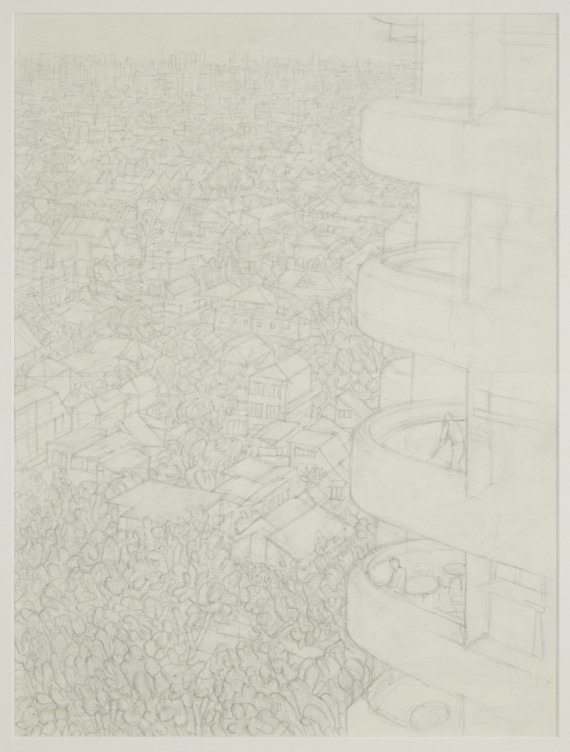 This year’s Jerwood Drawing Prize has been won by Tom Harrison for his delicate pencil drawing, From Andrew’s Flat, Singapore (above).

Harrison, who is about to start his first year at Royal Drawing School, London, received the £8000 award at the opening of the exhibition, which features work by 58 shortlisted artists. He created the drawing on a recent trip to Singapore.

Speaking about his winning work, he said: “I was highly stimulated by the lush green jungle offset against the lines of the architecture. My initial pull for the drawing was seeing all of this from an elevated position; an abstract pattern of the buildings jostling for space with the jungle becoming even more apparent.”

The second prize of £5000 was awarded to Finland-born, London-based Elisa Alaluusua who is currently undertaking a PhD at the University of the Arts London. Her video drawing, Unconditional Line (above), depicts the take-off and landing of a flight by tracing lines across the sky.

Describing the work, she said: “This particular trip belongs to a continuum of invisible lines drawn between London and Luusua in Finnish Lapland. The lines on the ground speak their own foreign language of order and safety that should not be compromised. The video is a reminder of the experiences of our own journeys.”

Two student awards of £2000 went to Bryan Eccleshall, currently completing a PhD at Sheffield Hallam University, and Canadian-born Lois Langmead, who graduated from Glasgow School of Art this summer.

Speaking about the winning works, Professor Anita Taylor, director of the Jerwood Drawing Prize project, said: “It is fascinating that, not for the first time, all four prizewinners are current, recent – or about to become – students, albeit at very different stages of their careers and development.

“The commitment and endeavour of artists and designers, emerging and mature, to use drawing as a vital means of creativity and as a means to explore and understand the world anew, is significant. The award winners deploy drawing in various forms to both document and to question our perceptions.”