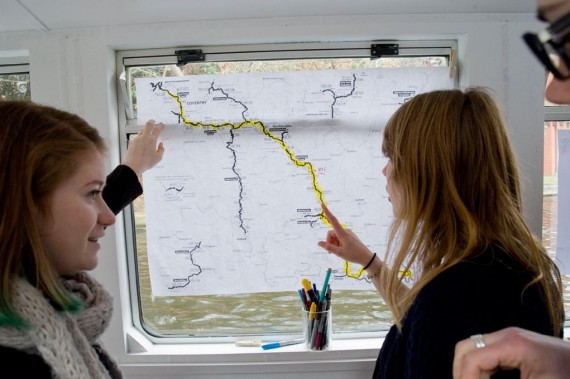 Tomorrow afternoon a converted narrowboat crewed by members of Ikon’s youth programme IYP and Chisenhale Gallery’s youth forum Propeller will begin a five-week return voyage along the Grand Union Canal. The Slow Boat brings together the groups from Birmingham and London to explore the historic waterway that links the two cities, and to produce a programme of performances, artworks and radio broadcasts along the way.

Kate Self at Ikon and Laura Wilson at Chisenhale Gallery are co-ordinating the project: “The idea of a relationship with time has been a recurring theme,” they explained. “The speed (or lack of) when travelling around canals is limited to roughly 3.5mph – this is a slow voyage. Also we’ve talked about Slow Boat as a time machine – a portal into Britain’s industrial past.”

Constructed in the eighteenth century, the Grand Union Canal was once a thriving industrial artery for the transportation of raw materials from Birmingham to London. It was also a vital channel for communication. The groups have been exploring Britain’s social and manufacturing history, considering the canal networks in relation to more recent communication technologies, particularly radio, and to the idea of transmitting knowledge through sound.

Working with artist Sarah Browne, the IYP have produced a series of sound works to be broadcast via Scarcity Radio while on board the Slow Boat. They’ve also been working with artist Sam Belinfante and crystal radio expert Geoffrey Roberts in the lead-up to the journey:

“There is something spellbinding about the ability to conjure sounds from the airwaves with as little as a rock and some wire,” said Belinfante. “This strange alchemy is wonderful because it is beautifully elegant and simple but also extremely opaque and mysterious.”

For Belinfante, sounds are a perfect metaphor for impermanence, and so perhaps the perfect way to document a passage through water: “Sounds die out as soon as they come into being, but at the same time they never really leave – they just get caught up in our bodies or in the landscape, the energy just gets redistributed.”

In London, artist Benedict Drew has been leading sound recording workshops and in April Propeller Radio was broadcast on Resonance FM, presenting a collective sound map from the group’s field recordings. Drew is using hydrophones and contact mics to turn Slow Boat into a musical instrument – during its journey the boat will resonate and amplify environmental sounds made inside and outside the vessel, and the resulting score will be streamed back to the galleries.

By retracing the physical channels between them, Slow Boat is strengthening ties between Ikon and Chisenhale Gallery, and between members of the two youth groups. In a world of virtual communities, instant messaging and decentred communication, this is a refreshing approach.