Sluice: more of a happening than an art fair - a-n The Artists Information Company 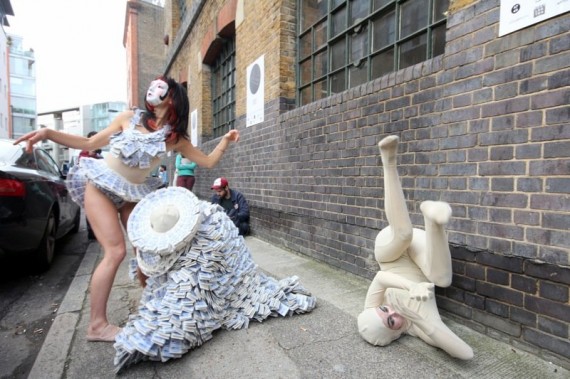 The smokers gathered outside 47–49 Tanner Street, Bermondsey seem surprised when the Brooklyn-based artist Ventiko and her collaborators ooze out of the building’s front door and into their midst. Sporting Ventiko’s ‘wearable sculptures’, one of which is made entirely out of empty cardboard milk cartons, they proceed to writhe and pose in slow jerky movements, as they perform the piece, Sylva Dean and Me. It’s a great welcome to Sluice Art Fair.

Inside, the atmosphere at this year’s fair, scheduled to coincide with Frieze London and billed as an artist-led alternative, was refreshingly relaxed and informal. I spotted one manicured blonde wearing her sunglasses indoors and a VIP wandered through holding a Jack Russell in her arms, but otherwise there was a notable lack of what might be considered poseurs.

Within ten minutes of arriving and having got just 20 feet into the main downstairs exhibition hall, I’d already seen a performance, had a cocktail thrust into my hands and overheard part of a participative open discussion on the ethics of taking a stand. Meanwhile, at the mobile Magic Shop – a charming performance piece by Royal College of Art student Karolina Magnusson Murray – I exchanged my less desirable ‘qualities’ for some I’m more in need of.

Inventive, energetic and vibrant, this year’s fair was mostly open-plan and spread across four floors. A handwritten ‘Manifesto’, unceremoniously taped to the back of a hardboard panel, announced the fair’s approach: ‘Sluice’s open-plan format is in part a reflection of its driving ethos – to encourage the cross pollination of ideas between artist-run scenes… as an embodiment of an attitude.’

This had clearly already started to take place when I arrived. A table next to where the Manifesto is posted featured the questions: ‘Is our confidence in our right to object affected by our sense of status?’ and ‘How do we respond when an expected ethos or format is seemingly disregarded?’ Helen Marland, one of a collective of nine artists from Unit 11 studios in Southampton, explains.

“We came with an expectation of open space. They [Sluice’s organisers] built a wall next to us and we had to respond to it. We wanted to be positive so we came up with this idea to create an open discussion. We hope to produce a document from people’s participation in it, which we’ll distribute at the end of the show.”

Around the corner from Unit 11’s piece was a working refrigerator counter, filled with ice and featuring two monstrous hakes with glaring eyes and 15 king prawns, all carefully arranged. It’s a manifestation of the Centre for Innovative and Radical Fishmongery – of course it is! – presided over by artist Sam Curtis, who used to work in Harrods as a fishmonger.

“I treated the job as an artist residency,” he says. “I took it on to support myself while doing my MFA at Goldsmiths. The fishmongering was a by-product of being a poor artist.” His artworks are temporary fish displays which he changes as we speak, adding some fierce-looking Dublin Bay langoustines. His work is concerned with labour and aspiration and has been made in collaboration with the gallery Division of Labour, run by Nathaniel Pitt.

The view from Brooklyn

On the whole, works at Sluice are conceptual rather than object-based. There isn’t much traditional painting or sculpture but plenty of installation and multi-media interdisciplinary work. Stephanie Theodore, owner of the Brooklyn-based Theodore:art Gallery, has come to London specifically to participate in Sluice. “I did the first edition [in 2011] and I wanted to support what Sluice is doing,” she says. Sluice works particularly well for her context, based as she is in Bushwick, Brooklyn.

“There’s an incredible concentration of artist studios and artist-run spaces in Bushwick,” she explains. “There is still a lot of industrial space that is relatively affordable. I show a lot of British artists, people I’ve known for a long time. It’s become my speciality and I’ve been coming to London four times a year since 1988. My UK artists are mature, and have a certain confidence in their vision and abilities, in what they are trying to get across. They’re very much self-starters.”

She thinks this is one difference between the London and New York scenes. “In the UK you have a long-standing tradition of artist-run spaces and a DIY culture and aesthetic. Maybe it’s the post-yBa influence? You don’t have artists doing that so much in New York. It happened in the East Village about 25 or 30 years ago, and it’s happening again in Bushwick now. Bushwick is becoming the epicentre of the pragmatic artist-run artworld.”

It’s an interesting take on the UK emerging artist scene, a layer of activity that Ben Street and Karl England, the organisers of Sluice, are keen to promote. Performances take place throughout the event, which is characterised by a spirit of generosity and authenticity. Really, it’s more of a happening than an art fair. The realities of the art world, though – including the desire and requirement to be noticed – are not too far beneath the surface.