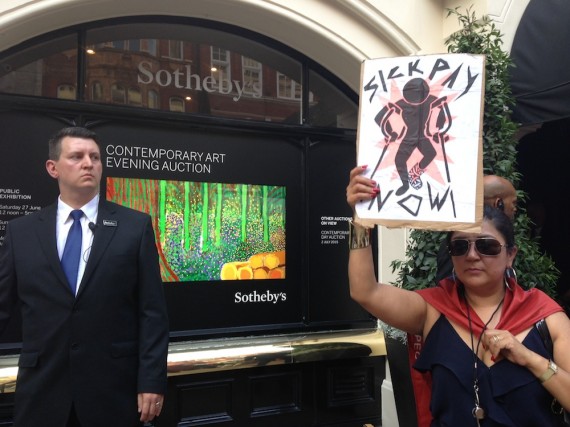 As inside Sotheby’s, wealthy collectors jostled to buy work by artists including Andy Warhol, Lucian Freud and Gerhard Richter on a night that raised a record £130.4m, protesters outside the London auction house also had money on their minds. Specifically, the London Living Wage of £9.15 an hour and higher levels of sick pay.

Organised by United Voices of the World (UVW) which describes itself as a ‘grass-roots, members-led trade union’, the protest by cleaners and porters at Sotheby’s was calling for the living wage to be backdated to when the new rate was introduced in November 2014 (Sotheby’s have paid it since April this year). It was also demanding that employees  receive contractual sick pay, rather than the lower – and legally required – statutory sick pay.

As well as employees, the protest also attracted a number of artists. Speaking the morning after last night’s demonstration, Shiri Shalmy, an independent curator and Open School East associate artist, said: “While Warhol’s One Dollar Bill was auctioned at Sotheby’s for an eye-watering £20.9m, outside cleaners and porters were demanding to be paid a living wage, get proper sick pay and end union busting and intimidation. There couldn’t have been a more striking picture of the gap between rich and poor in this city.”

Shalmy, who also took the photos that accompany this article, added: “Like in other similar struggles, artists stood in solidarity with cleaners and porters working in private and public art institutions. We are all part of what it takes to make exhibitions, concerts and performances. We are all cultural workers.”

Earlier today, UVW tweeted that Sotheby’s ‘have just sacked all the cleaners & porters who protesting 4 sick pay’. Asked to comment, Sotheby’s denied that anyone had been sacked and said that four of the cleaners had been suspended for what was described as “attempting to assault clients.” A statement from the auction house continued: “The assault took the form of spraying water from pistols and attempting to obstruct clients entering the building.”

The dispute between employees and Sotheby’s comes after an agreement over the same issues had been reached with the previous cleaning contractors, who were then replaced with the current contractor, Servest. Recent meetings between Servest and UVW have failed to resolve the situation.