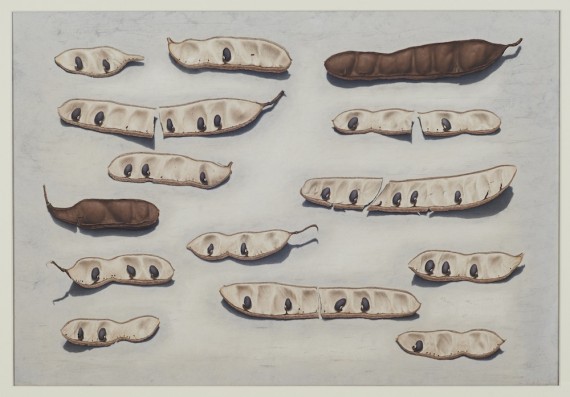 The 20th Jerwood Drawing Prize has, for the first time, been won by a sound piece. Alison Carlier has been awarded the £8000 first prize for Adjectives, lines and marks, a one minute and 15 second audio work.

Carlier describes the work as “an open-ended audio drawing, a spoken description of an unknown object”. The Dorking, Surrey-based artist completed an MA in Drawing at Wimbledon College of Art in 2013.

The extract Carlier reads out in the winning piece describes a Roman pot found in Southwark, not far from Jerwood Space. The source of the text is a reference book held at the Museum of London Archive.

“I was struck by the rich descriptive language of the text, mainly concerning the object’s tone and materiality,” said Carlier. “On reading the text aloud, I realised the piece worked similarly to prose; it exists in your head, rather than in a made or finished way… The adjectives remind me of the texture of dry materials; charcoal, conte, etc. The text seems to align itself, or suggest, marks on a 2D surface.”

This year’s second prize of £5000 was won by Sigrid Müller from Gower, South Wales for Seed Pods, a mixed-media, coloured pencil on watercolour drawing on board.

Two student prizes of £2000 were awarded to London-based artists Ara Choi, who completed an MFA at Wimbledon College of Art in 2014, and Annette Fernando, BA Fine Art (2011-14), Central Saint Martins.

A Special Commendation was awarded to North Yorkshire-based artist Sally Taylor for Confused Head 27, a posca pen and paper collage on a found book cover.

A total of 52 works by 46 artists, including eight student works, have been selected for this year’s exhibition which opens at Jerwood Space, London today 17 September, before touring to Cheltenham, Leeds, Bournemouth and Bideford.

An exhibition celebrating 20 years of the Jerwood Drawing Prize, Drawn Together: Artist as Selector, is at Jerwood Gallery, Hastings until 15 October 2014. www.jerwoodgallery.org