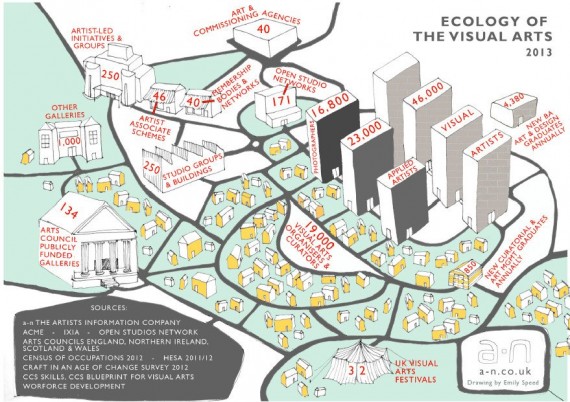 Five artist-led initiatives have been awarded a-n Go and See bursaries to enable them attend the Art Party, Bob and Roberta Smith’s ‘antidote to all other conferences’ that takes place in Scarborough this Saturday, co-organised by Crescent Arts.

The event is an opportunity to debate the future of the arts in today’s climate of spending cuts and changes to the education system. Applications for the Art Party bursaries were invited back in October to enable non-funded groups to ‘take a stand’ at the event, in order to extend their peer networks and reveal more about their practices and projects.

Being part of the debate

Lincs Artists Forum will use its bursary award to make new contacts and partnerships by linking up with other initiatives. With over 180 members, this platform for networking and information sharing connects artists across a rural location. The bursary will enable three of its members to attend the event. LA Forum’s Carol Parker said: “Nothing can replace the face-to-face networking that the Art Party will enable.”

Speaking about its award, the London-based sonic art collective Random Order added: “This is a rare networking opportunity that allows us to learn about others and share our own experiences, practice and approaches.” Formed in June 2013, the collective is comprised of four artists whose practices range from sculpture, film and performance to new technologies and immersive environments.

Black Dogs formed ten years ago in Leeds and is one of the organisations featured in Kevin Hunt’s Artist-Led Hot 100. The group says it wants “to be part of a debate” on the future of the arts that will take place at the Art Party because the event “is putting artists at the centre”. With 14 core members located across Yorkshire, London and Milton Keynes, its activities include exhibitions, installations, public events and interventions, publications, videos and collaborative learning projects.

NOWNOW is a Scotland-based group of eight artists formed in 2008 who collaborate on participatory, performative and interactive events in community settings. Speaking about its hopes for the Art Party, NOWNOW’s Catrin Jeans said: “With Scotland in particular focus, we must ensure that the actions are as ambitious and educated as possible.”

West Cornwall-based Blueprint sees The Art Party as an ideal way of expanding networks beyond its area. This evolving group of continually changing artists develops projects in unusual places. In September, it took over an old fish packing warehouse in Newlyn for an exhibition and programme of live art events inspired by Simon Armitage’s poetry.

Ecology of the Visual Arts

As part of a-n’s contribution, AIR Council’s Emily Speed has creates the Ecology of the Visual Arts map (pictured), available on the day. A special Airtime Stand up for your practice speed networking event linked to the Paying artists campaign offers advice from experts and members of the AIR Council on everything from charging, contracts, networking and social media. Contributors include Joseph Young, whose provocation elsewhere in the conference programme will be in the form of a performative concrete sound poem.