The British Pavilion with Sarah Lucas: sex and custard in Venice - a-n The Artists Information Company 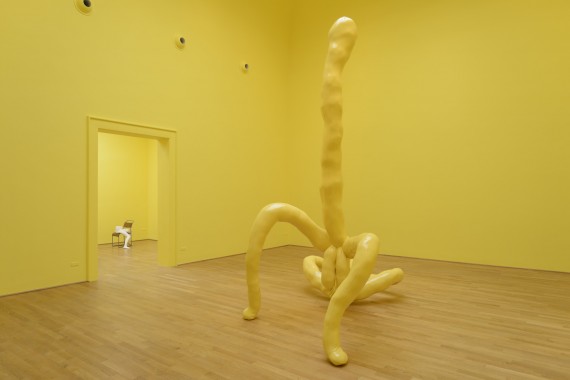 Sarah Lucas’s solo exhibition at the British Pavilion in Venice, I SCREAM DADDIO, is jam packed with her usual spin on sex, death, abjectness and a slippery notion of Englishness. It is in turns serious and humorous – a combination that few other artists can deliver.

Responding to the formal, neoclassical spaces of the British Pavilion, Lucas’s sculptures channel the ambiguity and vulnerability of her earlier work while somehow exuding a classical permanence, heft and solidity.

And it’s all very yellow. The walls of the space have been painted a kind of custard colour. A riff on her earlier use of fried eggs and yolk, it imbues the sculptures with just the right level of sunshine and humour.

Which is something that’s needed when viewing works such as Maradona. Named after the Argentine footballer, a figure squats on the ground while an enormous gravity-defying erection aims skyward. It treads a delicate line between beauty and buffoonery.

Elsewhere, Lucas’s other works are on a more human scale. A series of waist-down plaster casts of women are positioned on various pieces of furniture, a cigarette sticking out from the anus or vagina. Her Tit Cat sculptures, meanwhile, combine the wiry forms of cats with tied off, drooping orbs suggestive of breasts.

Commissioned by the British Council – which has been responsible for curating the pavilion since 1938 – this is only the third time that a solo female artist has represented Britain at the Biennale, the others being Tracey Emin (2007) and Rachel Whiteread (1997). In 2013, Jeremy Deller presented his solo show, English Magic.

Speaking to the Guardian’s Charlotte Higgins this week, Lucas commented that the show was aimed at women. She said: “I am a woman, I can’t take that out of it. I don’t think the world’s fair. Yes I am a feminist and it is a feminist show. I am not on my soapbox about it, but yes, I wanted this to be a strong feminist show.”

When asked about taking on the responsibility of representing Britain at Venice, Lucas said: “Nobody’s told me off about the fannies yet!”