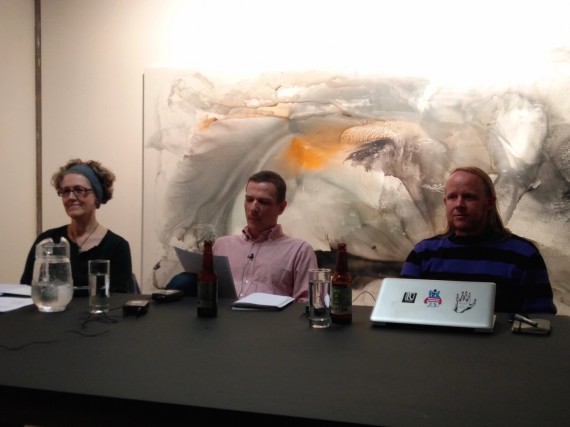 “Money is the perennial issue,” said director of Artquest Russell Martin in his introduction to the third System Failure event at Block 336 in Brixton. For ‘The money problem: or, how artists could be paid more than £10,000 a year’, produced in partnership with a-n and Artists Union England (AUE), he was joined by Paying Artists Regional Advocate Mark Gubb and AUE’s Angela Kennedy. Both panelists offered perspectives on the problem of how (and when) artists get paid.

They began by outlining their approaches to campaigning. Gubb referred to the successes and challenges of the Paying Artists campaign while Kennedy promoted the benefits of collective organisation. “(We’ve) got to stand up for each other,” she said, while acknowledging the various roles that different artists’ organisations play. It was acknowledged that a variety of approaches are needed to defend artists’ livelihoods in these difficult times.

Gubb read out a rather sobering email from an (unnamed) artist who argued that ‘by paying artists a living wage you are shifting funding from paying lots of artists little to paying a few artists more’, adding that it’s ‘daft to want more money from shrinking capital and increasing demand’. Is this our lot, then? Should we resign ourselves to perpetually low pay?

Gubb also cited a correlation between the number of practicing artists in a department and the quality of its professional development. Martin talked of a pedagogic issue with how information is presented to students, arguing that that students need to be taught there is more than one way to make a living as an artist.

The issue of ‘opportunities’ for artists was also discussed:“Is it a good opportunity or is it just offering free space?” asked Kennedy. When scanning for opportunities, artists need to dig deeper to see if what is being is offered is really fair and equitable.

Transparency in the advertising of jobs and negotiation of contracts is then key, to ensure that artists make clear and consistent choices. In contract negotiations, money needs to be talked about more openly to ensure that an artist’s fee is not lost or buried in material and production costs.

The representation of artists in the UK media was also seen as an obstacle to fair pay – it can often fuel a sense that artists are idle scroungers wasting public money. “Maybe it’s just about getting ourselves out there more and explaining to people what it is we do,” said Kennedy, citing the need for wider coverage of the lives of ordinary working artists, not just the international art world celebrities.

Martin added that he doesn’t know anyone whose working day is like that of the artists featured on the BBC4 programme, What do artists do all day? Perhaps a more representative programme would be titled, What do Anthony Gormley’s assistants do all day?

To sum up the discussion, it would seem that a lack of money is often a symptom of the systemic issues that artists face. If we can address core issues around the status of the artist, then perhaps the money will follow.

The money problem: or, how artists could be paid more than £10,000 a year took place on Wednesday 18 November, Block 336, Brixton. For details on more in the series visit www.artquest.org.uk

Listen to the whole discussion: