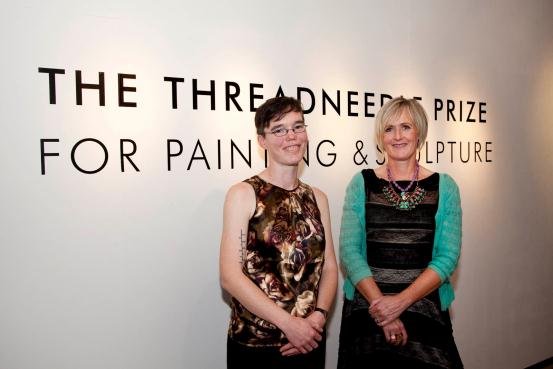 This year’s £30,000 Threadneedle Prize for figurative and representational painting and sculpture has been shared by two artists: Clare McCormack and Lisa Wright.

McCormack’s work Dead Labour/Dead Labourer is a tribute to the artist’s grandfather, who died of asbestosis. The woodcut image is printed onto scaffolding planks, a reference to his working life which was spent on building sites.

Wright’s painting The Guilty’s Gaze on the Innocent, which explores the embarrassment, confusion and awkwardness of adolescence, resulted from the artists recent recidency at the Royal Shakespeare Company.

The winners were selected by a panel including Dr Barnaby Wright, Curator at The Courtauld Gallery; art critic Laura Gascoigne; and artists Paul Benney and Tim Shaw. An exhibition of all 111 selected works continues at The Mall Galleries, London, until 12 October 2013. A Visitors’ Choice Award worth a further £10,000 will be announced towards the end of the run.

On 8 October, leading figures from across the cultural sector, including artist Jake Chapman, ICA Director Gregor Muir, musician, composer and producer Nitin Sawhney, and Channel 4’s Jon Snow, will each select and discuss one work at the Mall Galleries, as part of the annual ‘Critic’s View’ .