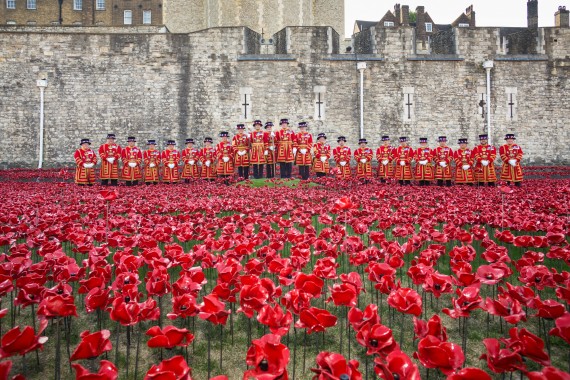 It’s been hard to miss the high-profile commemorative installation Bloodswept Lands and Seas of Red, what with visits from the royals and coverage on the TV news.

Inspired by lines written by an unknown soldier who died in Flanders in the early years of the first world war, ceramic artist Paul Cummins, working with stage designer Tom Piper and 8,000 volunteers, is filling the Tower of London’s dry moat with 888,246 poppies to commemorate British and Commonwealth fatalities between 1914-1921 – included are those who died from their wounds in the years following the 1918 armistice.

The first ceramic poppy was planted on 17 July 2014 by a Yeoman Warder of the Tower of London and the final one will be planted on Armistice Day (11 November). Currently forming two sections divided by an entrance bridge, a huge wave of poppies appears to hover over the queues of visitors as they wait to enter the tower.

The setting is pertinent – 2,647 of Britain’s war fatalities were volunteer conscripts of ‘the stockbrokers’ battalion, often city workers who joined the City of London’s 10th Battalion of the Royal Regiment of Fusiliers. They were also known as ‘Ditchers’ because many of them had been sworn in and trained in the Tower of London’s moat.

In the main stretch of moat, the poppies flood the grass, from certain viewpoints creating a powerfully arresting vision, whilst from others providing a reminder of the staged nature of this as yet unfinished construction. The work’s success is only partly determined by its aesthetic impact – it also relies on participation and a public desire to invest in a shared memory.

Cummins, who interprets the final part of the unknown Derbyshire soldier’s words – ‘The blood-swept lands and seas of red, where angels fear to tread’ – as speaking of the man’s children, discovered the text in a will while searching through old records in Chesterfield where his studio is also located. These pocket book wills and final letters, many of which never made it back to families, are reminders of the horrors and tragedies of the first world war.

At twilight each day, the names of 180 serving military killed in the first world war are read out in a roll of honour. Following this, the Last Post is played by a single bugle player, stationed on a small cleared mound among the field of still-standing poppies.

The installation acts as a stage-set for a daily commemorative act and a facilitative platform for public participation within the centenary commemorations. It is, then, a work in progress and for the moment at least some of the decisions around how it has been laid out seem to be lacking in conceptual and aesthetic strength. There is a randomness about the placing of some of the poppies and, with the structure that supports them still visible where they climb the wall at two points, the whole thing can look a little clunky.

As a civic project, Bloodswept Lands and Seas of Red clearly has the capacity to move a lot of people, but the instrumentalisation of the work detracts from its conceptual capacity. We’ll have to wait and see whether by 11 November and the 888,246th flower it has achieved the spatial and formal coherence that it needs.

Bloodswept Land and Seas of Red is viewable from the public areas surrounding the Tower of London until 11 November 2014. Members of the public can nominate a name for the roll of honour call using a ‘first come, first served’ weekly nomination system and are also invited to engage with the project on twitter via the hashtag #TowerPoppies. All the poppies will be available to purchase with 10% of the proceeds from each sale going to one of six service charities.