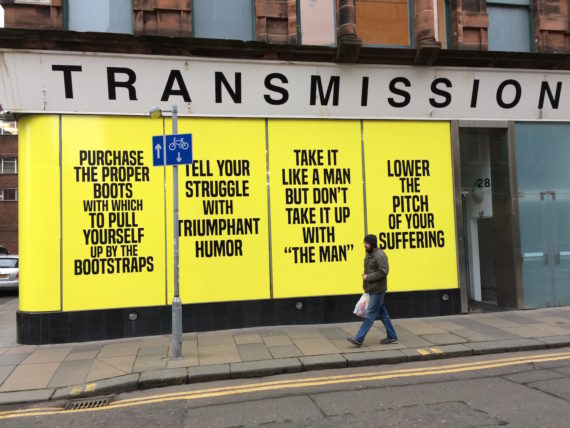 Transmission, the Glasgow-based artist-run gallery, has announced that it is postponing its annual members’ show which was due to open on 1 July. The show, titled ‘Fields of Wheat’, will now launch in September.

In a lengthy statement sent to its 300-plus members, the gallery’s unpaid organising committee also states that a new model for running the 34-year-old organisation needs to be developed due to the increasing financial and time pressures the committee faces.

“Much has changed since Transmission began 34 years ago, and we would argue that not all that worked then, can work now,” the Transmission committee explains.

“Various economic support structures no longer exist and thus a structure that presupposes relative economic stability of the committee must be challenged. If this structural model is not questioned, only a narrow section of society will be able to undertake unpaid work like this.”

Expressing its “regret and sorrow” for having to make the decision to postpone the show, the committee cites a lack of “capacity to undertake another exhibition at the moment, nor to organise the support that we would require to do so”.

They explain: “We currently have a significantly reduced personnel, with several committee members having recently left, and others out of the country undertaking other projects.

“Those of us who are around (and even those who are not) are worn to the bone, having already experienced multiple burnouts, whilst other crucial administrative work continues to pile up.”

The committee’s statement raises important questions about the sustainability of artist-run spaces as artists increasingly find themselves having to hold down multiple jobs while also pursuing their practice.

While conceding that the issues cited are not unique to the current situation, the committee add that they do not accept that these should be considered “part and parcel” of their role.

“We are now striving towards an alternative but recognise that this will take time,” they say. “Over the coming months we will be opening the space to the membership and wider public for discussion about the success and failures of the existing model as it relates to Transmission and other artist-run spaces.

“Of particular concern is questioning what it means when those asked to perform free labour come from historically underrepresented, disenfranchised and underpaid peoples.”

Transmission, which was formed in Glasgow in 1983, is run by a committee usually consisting of six members. This operates on a rolling basis, with each committee member working for a maximum of two years.

The model developed by the gallery has been widely copied by other artist-run galleries and projects and Transmission is one of the longest-running artist-run spaces in the UK. The gallery took its constitution from the artist-run group the New 57, formed in Edinburgh in the 1970s.

Transmission originally started as a reaction to the lack of exhibition opportunities for graduating art students in Glasgow. A registered charity, it is supported by Glasgow Life and Creative Scotland.

While the members’ show has been postponed, other scheduled events will go ahead as planned. These include the annual Transmission Summer Party on 22 July and a two-day series of workshops and performances organised by Katherine MacBride on 28-29 July.