Trolley: "It's about more than just making books." - a-n The Artists Information Company 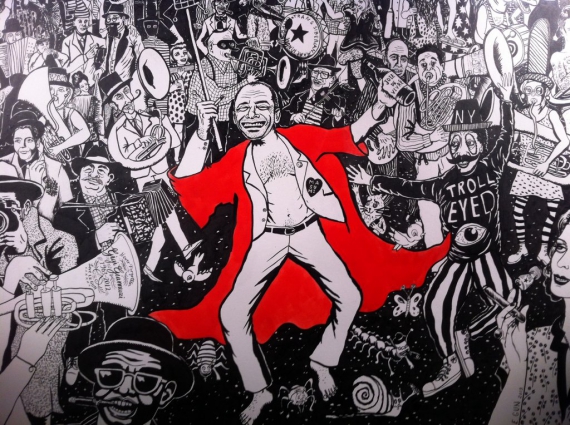 “Gigi was known for taking a shopping trolley around Frankfurt Book Fair instead of having a stand, so the name stuck and he became Trolley,” reflects Hannah Watson. She’s discussing the origins of Trolley Books – a small but potent publishing house dedicated to photography, reportage, contemporary art and literature.

Maverick, genius editor and activist Gigi Giannuzzi, who died a few weeks ago on Christmas Eve, founded Trolley Books in September 2001. Watson joined the company in 2005 as the managing editor having returned to London following a spell working at the Guggenheim in Venice. The imprint quickly gained a reputation for producing an incredible array of provocative and daring titles that merged documentary photography with a distinct flair for design. These include critically-acclaimed books by Robin Maddock, Margaret M de Lange, Nina Berman, Paolo Pellegrin, Thomas Dworzak and Philip Jones Griffiths.

From the outset, Giannuzzi always championed the idea of photography as a vehicle for social change – the more obscure the subject, the better the reason to publish it, whatever the cost. (Stanley Greene’s Open Wound, for example, is reported to have cost 75,000 euros to produce.) Marketability was never given precedence over journalistic integrity. Perhaps the purest and most affecting expression of this vision can be seen with the book The Only House Left Standing by Tom Hurndall, a young British peace activist who died in 2004 after being shot in the head by an Israeli sniper in the Gaza strip.

Trolley has now opened an exhibition – TROLLEYOLOGY – at the Londonnewcastle space in east London, to mark its tenth anniversary. A book of the same name is due to follow in the spring. Running over two weekends, the show contains previously unseen material from the making of the books, including personal images, contact sheets and films showing photographers’ recollections. Watson explains: “Usually touching on abuses of power and human rights, publishing with Trolley is more than just making books, each photographer or writer has a unique story of their journey to print.”

And stories abound. A voyage of ideas, the exhibition is vast and sprawling. It brings together photographers such as Nan Goldin, Alex Majoli, Stanley Greene, Adam Broomberg and Oliver Chanarin, Tom Stoddart and Alixandra Fazzina, and also includes contributions from artists such as Paul Fryer, Sarah Lucas, Polly Morgan, Mat Collishaw and Le Gun, along with written extracts from the Guardian’s Sean O’Hagan, Julian Stallabrass and cultural historian Barry Miles.

Giannuzzi was suffering from pancreatic cancer when he died in December, aged 49. “When Gigi was diagnosed, we came up with the idea of a book as something for him to work on. Everyone jumped on it, even though Gigi was quite humble about it,” explains Watson. “The one thing he said was that he wanted it to be things people hadn’t seen before, new content. So we started asking all the photographers to dig out any photos they had of their Trolley times and began to interview lots of people involved.

“We never celebrated our tenth anniversary in 2011. Even though Gigi wanted a rave, I said no, and plans for a show fell through because of money. So we never did anything. So it also became an official Trolley retrospective of our first ten years. Gigi never forgave me for not having that rave!”

Renowned for being something of a reveller, Giannuzzi would have been proud of last night’s private view turn out and its congenial atmosphere, as indeed he would of his funeral at Shoreditch Church, where many members of London’s photography scene gathered round his wicker coffin, which was placed on two welded-together shopping trolleys, full of books and red roses.

With an eye to the future, Watson says the plan for Trolley is simply “to carry on publishing our books and to look after the legacy of the existing ones. Now Gigi is gone they seem more important than ever.”

Giannuzzi’s life was one vast exercise in not choosing the easy option – fighting and standing up for what he believed in, publishing difficult photobooks against all the odds. As his favourite Jenny Holzer t-shirt says: ‘ABUSE OF POWER COMES AS NO SURPRISE’. Aptly, these words are also emblazoned on one of the walls at the exhibition.