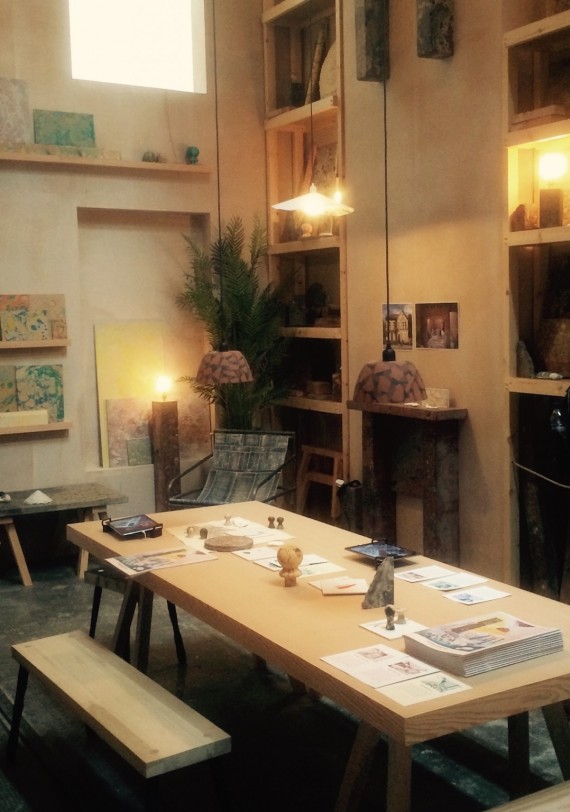 Glasgow’s Tramway has never looked so smart and sparklingly white – well, the Turner Prize is in town, after all. Showing in Scotland for the first time, for this year’s exhibition the vast main exhibition space in this former tram shed has been neatly partitioned for the four shortlisted artists, with each getting their own distinct space.

While the effect of this transformation is a feeling that the Turner Prize/Tate brand has been parachuted into the space, the disparate nature of the works demands such an approach. Spanning architecture, a choral performance, installation, and a study room groaning with books, the exhibition showcases a diverse range of practice.

The 18-strong architecture collective Assemble have perhaps made the best use of Tramway’s space and in particular its height. A Showroom for Granby Workshop (2015) – pictured above – is a to-scale replica of one of the houses from their Granby Four Streets project in Liverpool, including the terraced house’s back kitchen space and front bay window.

The latter features five shallow shelves on which a hundred or so doorknobs are displayed, and the ‘house’ is full of items – chairs, a coat stand, lampshades, concrete mantelpieces, wallpaper – that can all be bought online. There’s an 80-page newsprint catalogue available, too.

The space, then, is literally a showroom, and the funds raised will go towards financing the group’s latest social enterprise. Encompassing design, architecture, craft and the skilling-up of local people via workshop activities, Assemble’s room is colourful and decorative while at the same time asking important questions about housing, social cohesion and the notion of making. It is timely and quietly subversive.

If Assemble offer a kind of homely warmth, Nicole Wermers‘ precise, pared-down installation (pictured below) is ice cold. Untitled Chairs (2015) features a variety of women’s fur coats sewn onto chrome-framed chairs by Bauhaus designer Marcel Breur. Aping the way people will often put a jacket on the back of a chair to mark a private area in the public sphere, it feels like a space waiting to be filled, a work in awe of its own presence.

On two walls, three white ceramic sculptures recall those poster ads that invite you to tear off the telephone number – ‘Drummer wanted’, that kind of thing. But they are blank, their stories wiped clean.

Bonnie Camplin‘s study room (pictured bottom) requires another gear shift – here, there is so much to watch, listen to and read that you could easily find yourself in a conspiracy-theory shaped wormhole for the rest of the day.

The soundproofed room invites quiet contemplation but the material on show isn’t designed to evoke good karma. A central installation of five video interviews beckons you into a world of extra-dimensional beings, mind control and Fourth Reich fantasists. Around the edge of the room there are tables full of books and documents printed from the internet, offering ‘proof’ that perhaps the interviewees aren’t as crazy as they sound. Then again, maybe they are.

Janice Kerbel is nominated for her choral piece, DOUG, (pictured, second down) originally performed at The Mitchell Library, Glasgow. At Tramway, she presents the piece again, to be performed in the gallery every day throughout the exhibition. Sang by a choir of six, the piece recounts the mishaps and misdemeanours of the hapless ‘Doug’ of the title, turning the absurd drama of these events into a musical narrative. A text-based wall piece graphically represents a selection of single words from the piece, and on another wall the words for DOUG‘s nine sections are presented.

The winner of this year’s £25,000 prize will be announced on Monday 7 December during a live Channel 4 broadcast from Tramway. Who should win? The work’s are so different in so many ways that the jury’s job seems almost redundant. Perhaps a Theaster Gates-style, “Let’s split this motherfucker” approach – witnessed when the Chicago artist accepted the Artes Mundi 6 Prize earlier this year – would be an appropriate solution.

The Turner Prize exhibition opens to the public 1 October 2015 and continues at Tramway, Glasgow until 17 January 2016. www.tramway.org