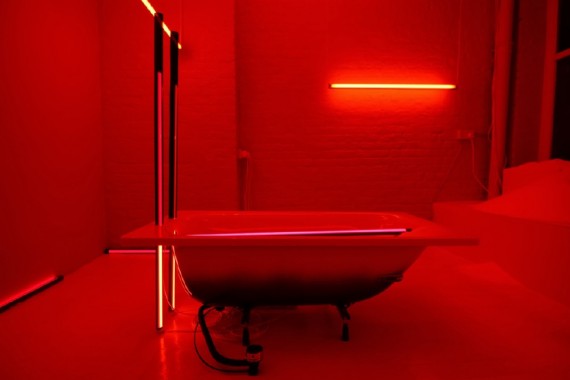 Uliana Apatina has been awarded the inaugural Kim Fielding Award, created in memory of the Cardiff-based artist and curator who passed away in February 2014.

The London-based, Siberian-born artist will use the £5000 award to create a new “living installation” to be presented in Wales this autumn.

“I create space: immersive, site­-specific, disorienting environments striving to activate all bodily senses,” says Apatina, who has proposed a work that will involve the artistic community and engage wider audiences in Cardiff.

With a background in video, drawing and installation, the artist has exhibited widely, undertaking international residencies at the British School at Rome and Aso Minamioguni-machi in Japan, as well as showing at Chisenhale Art Place and the Whitechapel Gallery.

For the Kim Fielding Award, Apatina will develop a collectively-owned experiential space: “I am addicted to unusual, challenging or controversial locations with a distinct character or misleading history. The same applies to people and situations alike,” she says.

The inaugural award continues the creative concerns of Fielding by celebrating and supporting experimental contemporary arts practice. Fielding was an inspirational figure in the Cardiff art scene and co-founder of the internationally active collaborative project and gallery tactileBOSCH.

The award has been made possible following a successful crowdfunding campaign, led by the new charity, which is supported by friends, family and colleagues of Fielding. A call for proposals was made in February 2015.

The project will launch in Cardiff in May, when further details of Apatina’s plans will be announced.