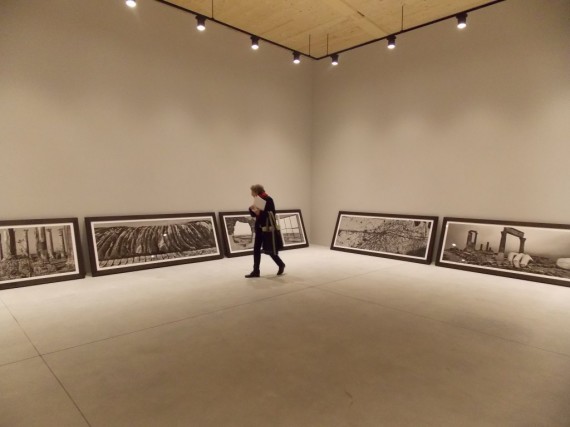 The ten new national pavilions at this year’s Venice Biennale have not arrived quietly – instead they have been grabbing headlines and winning awards. Of course long before the 55th International Exhibition opened, the debut appearance of the Holy See was attracting great anticipation. Angola, meanwhile, picked up the Golden Lion for Best National Participation for Edson Chagas’ Luanda, Encyclopedic City.

The Angola pavilion is a modest affair, featuring Chagas’ photographs of everyday found objects sited uncannily within Angola’s capital city Luanda, and displayed as piles of posters on the floor of the 16th century Palazzo Cini. As you might expect, the Holy See pavilion is a rather grander undertaking. Based on the first eleven chapters of the book of Genesis, the pavilion’s curators have commissioned three international artists to respond to one of three themes: Creation, Un-Creation and Re-Creation.

The exhibition references contemporary religious art with a Bill Viola-like multimedia installation by Milan-based collective Studio Azzurro – who are perhaps over-literal in their response. Having passed through the room of life-sized humans displayed on large screens, it’s a relief to enter the calmer, more considered display by Czech artist Josef Koudelka. Responding to the idea of Un-Creation, the themes of universalism, man-made destruction, the ravages of time and lost human potential are conjured up in 18 heavily framed black and white derelict landscapes, displayed in sets of three and propped against the wall.

Rome’s Via Appia Antica is juxtaposed with a Slovakian quarry and the Berlin Wall pre-1989. Perhaps more controversially, an Israeli restaurant on Jordan’s border sits alongside a Brandenburg coalmine and a Libyan basilica. The images are striking and meditative while the curatorial intention is for the theme of Un-Creation to conjure up the biblical ‘punitive/purifying event of the Flood’ as a response to ‘man’s choice of going against God’. The final room contains the Australian Lawrence Carroll’s Arte Povera-inspired paintings that rather dilutely hint at Re-Creation.

“It’s really important to create a space for dialogue,” says Micol Forti, co-curator of the pavilion and Director of Contemporary Art at the Vatican. “We are not a State in the normal sense, we can be a place to put the question out – a place where people from different faiths can gather.” Interestingly, Forti explains that she had complete autonomy in selecting the artists regardless of what their own faith might be, her criteria being the three curatorial themes.

The other first-timers at the Biennale are the Bahamas, The Kingdom of Bahrain, Republic of Ivory Coast, Republic of Kosovo, Kuwait, Maldives, Paraguay and Tuvalu. Each pavilion has commissioned works that balance politics and aesthetics to varying degrees, with Kosovan artist Petrit Halilaj’s giant nest being the most enchanting and aesthetically sensitive reflection on loss, survival and security.

Population loss is at the heart of the Paraguay pavilion, where the focus is on genocide through collateral damage, negligence and war. On entering I’m given two gifts; one from artist Diana Rossi and one from the indigenous Ache tribe of Paraguay. As a ‘Paleo-artist’, Rossi has been working with the tribe who are now just over 100-strong. Their decline is due in part to the collateral damage inflicted when forests are destroyed for economic purposes. Rossi uses a range of found and natural materials to create a somewhat scruffy, talismanic sculpture of the tribe’s sacred ancestor and icon – the Anteater. Her intent is unfortunately shrouded by a tacked-on wall display of information that could have been given more curatorial consideration.

Rossi’s crafty, outsider-like art is contrasted with Daniel Milessi’s knowingly-dated computer game graphics. His three videos tell of the massacre of over 60-70% of the Paraguayan population in the Triple Alliance War of 1864-1870. Milessi explains how since then, much of Paraguay’s culture has been lost, with Brazil withholding the country’s national archives in order to preserve geo-political boundaries and resources. “I use my own perception of history through the video games to recall the memory,” says Milessi, who states that he has no particular political agenda other than his own personal beliefs.

“The intention of the show is that our country has many points of view – the art world is a bit unruly and free and so is our country,” says Paraguay commissioner Elisa Victoria Aquino Laterza, a trained lawyer with a diplomatic history who was the initiator of the pavilion.

Floods and rising-sea levels, whether a message from god or a symptom of man-made climate change, are central to the exhibitions of two ‘vanishing’ nations. Both the Tuvalu and Maldives pavilions address the prediction of their imminent disappearance from the world map.

Tuvalu’s participation has gained headlines due to the overtly earnest and crazily kitsch installations of ‘artist as diplomat’ Vincent J F Huang. Based between Taiwan and London, the artist has long been interested in the fate of the Polynesian islands, developing strong links with this tiny nation. The decision to be in Venice is clearly an awareness-raising campaign. “The artist, as public intellectual, should create artworks that are not limited to a gallery or museum,” says Huang, who has already represented the country at the Cop18 Doha Climate Change Conference and created works during a visit of the Duke and Duchess of Cambridge to the former British colony.

The Maldives pavilion’s Portable Nation exhibition similarly posits various climate change debates surrounding rising sea-levels, but with a more varied message. Aida Eltorie and Khaled Ramadan from the curatorial collective The Chamber of Public Secrets, describe the impetus for the project. Having already curated part of Manifesta 8 in Murcia, Spain, the collective – whose agenda is “to discuss things happening which the public know about and don’t act upon” – decided to take their investigative approach to Venice.

The Maldives was one of three nations approached by the curatorial trio, who also submitted proposals to Libya and Lebanon. No strangers to Venice, Eltorie curated the 2011 Egyptian pavilion, and their collaborator, Oriel Mostyn director Alfredo Cramerotti, has also co-curated this year’s Wales in Venice show. Ramadan insists that they would have been happy to curate all three national pavilions, and with their exploratory and lo-fi approach they could well have achieved this. Based in a slightly dilapidated building owned by the Gervasuti Foundation, this largely self-funded project has each artist providing their own funds and sponsors.

The largely video-based exhibition combines a variety of viewpoints to raise awareness and lift the lid on climate myths. The resulting message is a cacophony of voices and opinions – perhaps a real representation of the international political stasis on environmental policy. Eltorie talks of the mission of the exhibition with some urgency, describing it as a case study with works by international artists to conjure up notions of people power in the face of imminent disaster. “Nothing could happen unless people could come together, it’s about re-unifying your strengths,” she says. In particular, she describes Klaus Schafler‘s work as “offering solutions that politicians could do but aren’t, [in particular] the question of oil and its priority over people.” Elsewhere, art activist Oliver Ressler‘s film links the increasing inter-connectedness of global uprisings with global warming.

Ramadan’s film, Maldives To Be or Not, in collaboration with Abed Anouti, provides a critique of climate change exaggeration. Visiting the Maldives in March 2013, Ramadan explores perceptions of the islands through its inhabitants’ voices. The film interrogates blanket perceptions of the islanders as propounded by catch-all western analysis. His exploration leads to a critique of the government’s over-reliance on international funds to counter rising sea-levels and a suggestion that exaggerations might be propounded for these reasons. As Ramadan says, this somewhat problematic conclusion reflects the nature of Portable Nation: “As long as the scientific community do not conclude, this is an inconclusive exhibition.”

For more on the Venice Biennale use the venice_2013 tag.