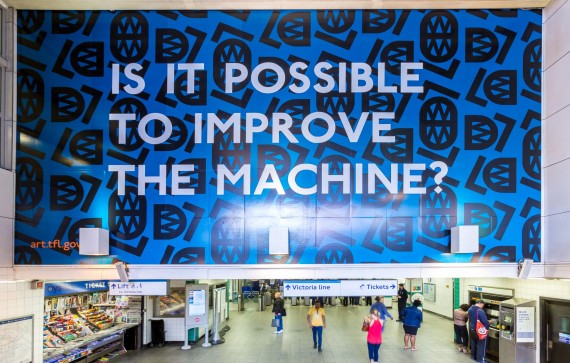 Art on the Underground has launched Underline, a year-long programme of arts commissions for the Victoria line.

The programme will see new projects by visual artists Giles Round, Liam Gillick and Zineb Sedira, as well as from the Turner Prize-nominated art/architecture/design collective Assemble. There will also be a music commission by composer Matt Rogers, to be performed by London Sinfonietta.

Round’s Design Work Leisure launches the commissions. This new design office draws on the legacy of Frank Pick, managing director of London Underground in the early 20th century, and the pioneering work of the Design Research Unit, responsible for the original 1960s Victoria line aesthetic.

Round’s project includes the distribution of a design directive pamphlet that outlines the aims of Design Work Leisure, built on the idea that ‘good design leads to a better society’.

Over the next 12 months, the artist will be researching and designing new products – including a platform clock, relief tile and staff cutlery – for the underground network’s environment, staff and passengers.

“I am interested in exploring the legacy of Frank Pick and the way he commissioned artists to work directly with the institution,” said Round.

“In a similar way, the Design Research Unit sought to connect artists with industry to produce functional works. With Design Work Leisure I intend to revisit this method, working in collaboration with both London Underground and associated industry.”

Liam Gillick has been shooting on the Tube network and his resulting films will be screened in the autumn, while Zineb Sedira is currently in production for a new film and photographic work that will conclude the Underline series next summer.

A series of above ground interventions by Assemble will see a new public space that takes inspiration from the subterranean geology of the network.

“We are fortunate to be working with such inspiring artists to develop new works that will celebrate and challenge our perception of the Victoria line and its history.”

Artists and the uncanny: shadow worlds at Freud’s house by Pippa Koszerek