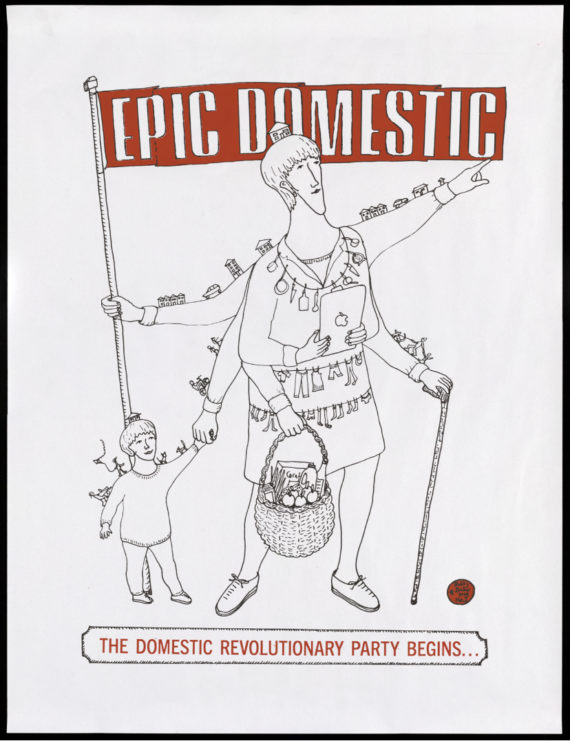 The Unlimited arts commissioning programme supports disabled artists to create and present their work across all art forms. Delivered by Shape Arts and Artsadmin, the selection criteria requires that projects show ‘quality, innovation and ambition to develop new artistic work’, with artists funded from Scotland, Wales and England.

In this round, 468 artists applied and 77 artists were shortlisted, with 34 receiving awards. Here we take a look at the work of five a-n members who have received awards as part of the 2021 programme. 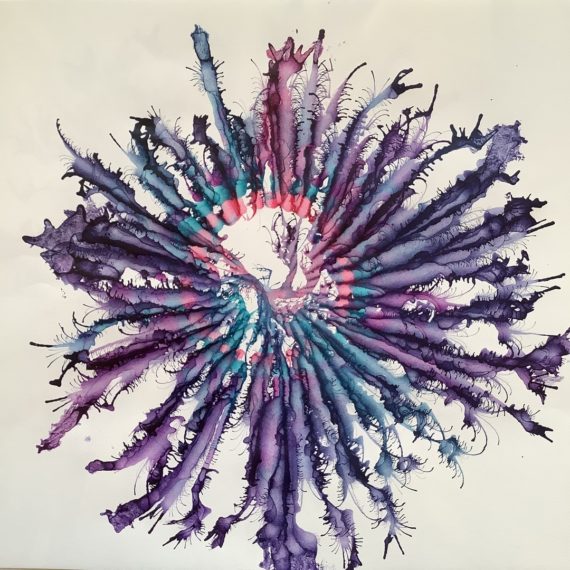 His experience of disability — living with pain, physical limitations, disillusionment and disconnection— strongly impacts his practice. Performance is a key part of his practice as it fulfils a need to be seen physically and creatively, but in a form he controls. He deconstructs, misuses and repurposes software to challenge notions of ownership, narrative and visibility.

His project with Unlimited, entitled Wheel trails, is a geo-located, digital, floor-based street art project, inspired by the water trails left by wheelchairs on the ground. Using the motion unique to the movement of mobility wheels to draw intentional marks in the digital space, it is viewable by others through phones or projection.

Explaining his project, Wilk says: “It is exciting to me as a lot needs to be challenged in terms of the barriers our public space creates, and I’m looking forward to doing so in a celebration of disability-led movement and activism. Using augmented reality as a tool for producing critical relations between bodies, environments, and technologies.” 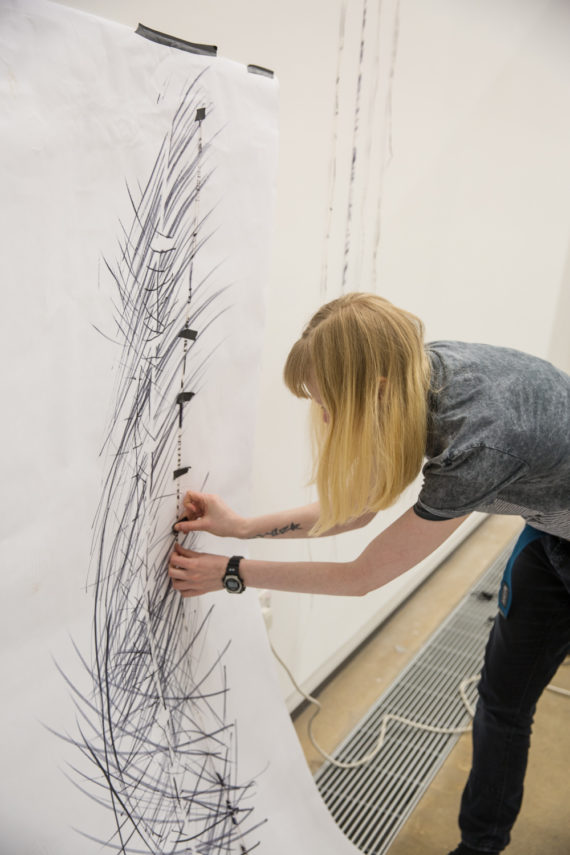 Sam Metz (Emerging Artists Commissions – England: North, Combined arts) is an artist, curator and researcher whose work researches, creates and reflects on the concept of what they refer to as ‘choreographic objects’.

A ‘choreographic object’ is any work Metz creates that has, through the process of making or in the way it looks, a relationship to the body and movement. These works have included animation, analogue and digital film, paintings and crafted objects, such as 3D printed forms. Metz’s objects are created through movement and rhythm, whether in the form of still images lifted from film footage of the artist’s live art or in the dynamic, repetitive gestures of their mark making.

Referencing space, time, rhythm, repetition and direction, the objects then go on to inform choreography, as well as to document it. They are reliant on visual empathy on the part of the perceiver to interpret and respond to the works through and with the body.

As a neurodivergent artist with sensory processing differences, these objects allow Metz to work in non-verbal ways that begin and end in movement and embodied interactions without recourse to traditionally privileged verbal and written forms of communication.

They comment: “The Unlimited emerging award marks a really exciting phase in my work. It feels great to be supported to make work that looks to legitimise non-verbal communication and values disability. I am looking forward to creating drawing, film and sculpture over the next year. The award will allow me to create a body of work that describes missing stories in art development around dynamic disability, neurodiversity and alternative communication.” 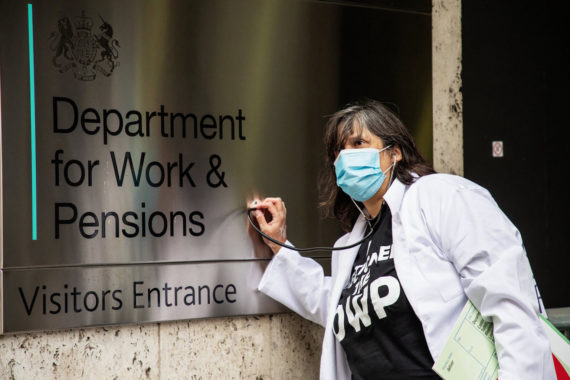 Dolly Sen (Main Awards – England: South East, Combined arts, Wellcome Collection Partner Award) has a “brain of ill-repute”. Because of this she is a writer, artist, performer and filmmaker. Since 2004 she has exhibited and performed internationally. Her films have also been shown worldwide. Her journey as an artist has taken her “up a tree in Regents Park, to California’s Death Row, to the Barbican, Tower Bridge and the Royal Academy, Trafalgar Square, and up a ladder to screw a lightbulb into the sky”.

Sen’s creativity aims to “put normality over her lap and slap its naughty arse”. More recently, she has sectioned the Department for Work and Pensions and has art displayed in the Wellcome Collection’s ‘Being Human’ exhibition. She is “working class, queer, interested in disability and the madness given to us by the world”. Her latest project Birdsong from Inobservable Worlds will use literature, performance and film to add missing voices to the current archives of mental health. 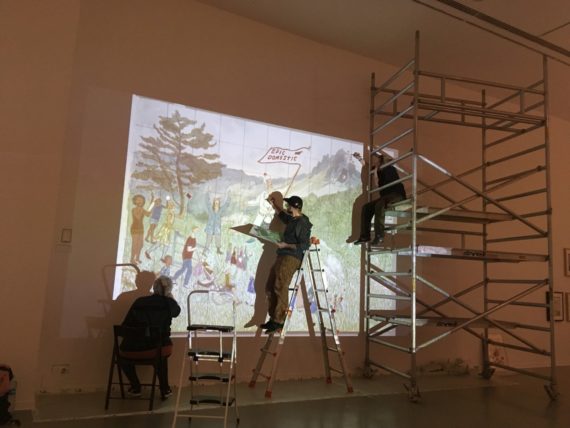 The Unlimited grant, in partnership with Museum of the Home, will support Baker’s EPIC DOMESTIC (ED) – Baker’s artistic quest to create a Domestic Revolutionary Party fit for the twenty first century. It is inspired by the radical activism of the dada movement and the propaganda imagery of the Soviet Union in the early 20th Century. ED aims to celebrate and draw much-needed attention to the importance and value of domestic labour and care.

Baker comments: “I want to explore the power of the internet and how images and tiny ideas capture public attention. My ambition is to defy what society expects of people like me. All my life I’ve been bombarded by expectations and stereotypes, ‘isms’- currently it’s ageism. I aim to defy stereotypes of what a woman my age can do. You don’t come up with a revolution in one day – you develop it from a lifetime of experience, survival and joy. My grandmother and mother resented domestic work, both wanting proper careers, as an artist, and a doctor. Their experience underpins my approach to life and art.”

Read our interview with Bobby Baker as part of a-n’s 40 Years 40 Artists programme. 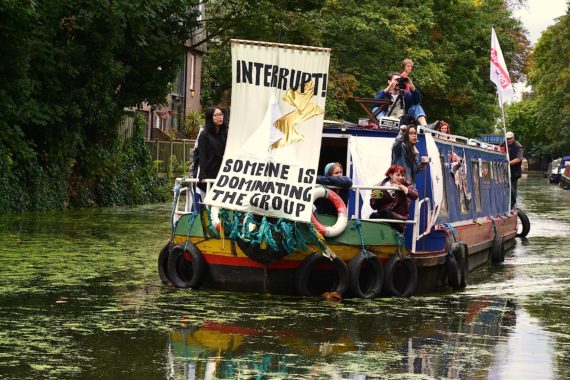 Rhine Bernardino (Research & Development Awards – England: London, Combined arts, Bagri Foundation Partner Award) is an artist, independent curator and researcher with a background in filmmaking. She holds an MA Fine Art (Sculpture) from the Royal College of Art, for which she was awarded the highly-regarded Abraaj-RCA Innovation Scholarship, and has curated and exhibited her artwork internationally especially in Europe and Asia. She has been invited to take part in several international art residencies and programmes most recently as part of the Australia Arts Council’s Future Leaders Programme and Office of Contemporary Art (OCA) Norway’s International Visitor’s Programme.

Bernardino has been carrying out extensive field research and mapping of art collectives, alternative spaces and community-based projects across the globe. In building on this work, she’s been looking at a myriad of possibilities of working with communities through art practice in driving societal change and aiding in highlighting the marginalised voices of communities and societies.

She further extends her art practice through _inventory, a collaboration-based platform that showcases artists’ works while aiding the co-creation of programmes to engage communities in the urban and rural contexts.

Commenting on the impact of the award, Bernardino said: “It kickstarts a project that is BIPOC-led and is rooted in our culture, identity and representation. The UK’s South East Asian diaspora has significantly increased since 2001. A big part of it is the Filipino population living and actively contributing to the British economy, with a big portion working unbelievably hard during the pandemic. The numbers are rising, yet there remains quite an insufficient representation of the community, particularly in culture and the arts, with almost none in the arts and disability sector.

“This becomes critical as the community faces new challenges of integration that emphasises intersectionality, pluralism and solidarity. In the discourse of representation and diversity, it’s fundamental to address this issue of integration in migrant communities and how lack of presence of a specific racial or ethnic background in culture and the arts further contribute to this. This is the reality now, but through grants like this, we can change our future collective narrative.”