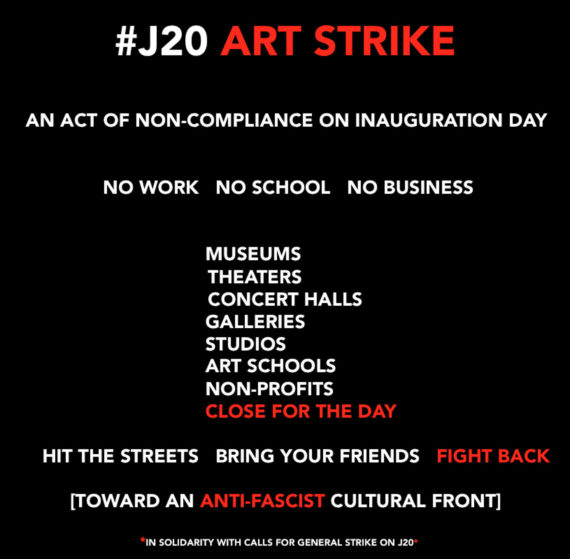 Artists in the US are discussing whether to join a general strike marking president-elect Donald Trump’s inauguration day on 20 January 2017.

The J20 Art Strike is calling for ‘an act of non-compliance on inauguration day’ from artists, museums, galleries, theatres, studios, art schools and non-profits.

The New York-based art site Hyperallergic has come out in support of the idea. Editor Hrag Vartanian said in an article headlined ‘Should the art world strike on inauguration day?’: “The unease and fear in the art community about a Trump presidency are real.

“There’s a feeling among many artists and various art workers that for too long we’ve been dormant in challenging the infrastructure and networks being created around art.”

The art critic and historian Yates McKee, talking about the likelihood of such a strike taking place, said: “I suspect art would proliferate around such a call if it started to get legs.

“In terms of feasibility, I can imagine small, flexible organisations easily undertaking a de facto closure, even without officially endorsing a strike in the voice of the institution.”

He warned about the impact it could have within larger museums, saying it could drive a wedge between staff, on the one hand, and directors, boards, and donors. He did however add that this might “result in a potentially fruitful antagonism in the long term.” 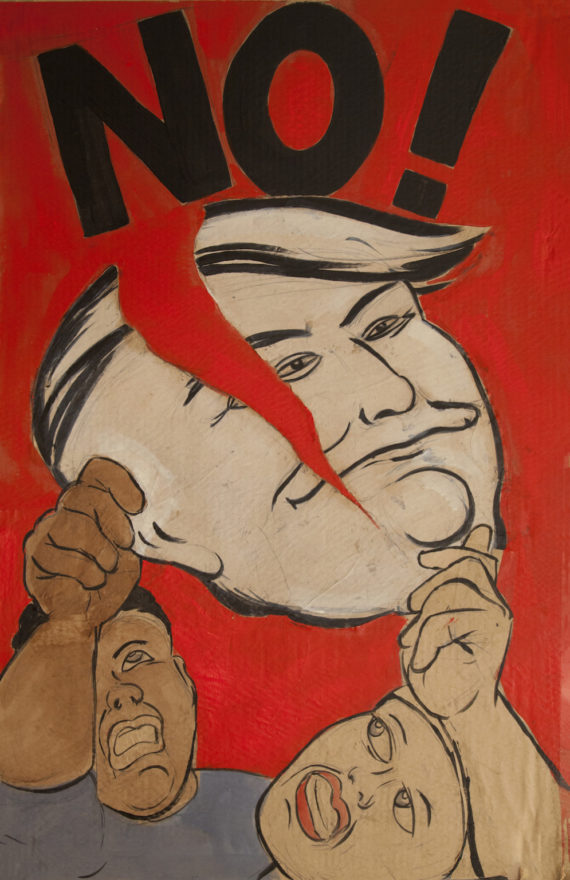 Responding to the call on Facebook, artist Mary Jo Karimnia questioned whether a cultural shut down would have any effect on the Trump administration.

She said: “Tell me why I shouldn’t just hole up in my studio and make artwork from dawn til dusk in defiance. I consider my position as an artist and arts administrator even more important under this upcoming regime.”

Matthew Deleget, artist and director of New York gallery Minus Space, confirmed they would be taking part. He said: “Definitely count me in! Minus Space will be closed on inauguration day.”

Meanwhile, US artists are making their anti-Trump protest art available to download for free as part of the continuing protests against the president-elect.

The website Hair on Fire is organised by Brooklyn artists Lee Boroson, Laura Parnes, and Kirsten Hassenfeld. It is acting as a portal for designs which can be downloaded for use on t-shirts, posters, badges, etc.

Pictured above is a poster by the artist Zoe Beloff. Artists who are interested in contributing their designs are invited to email: [email protected]