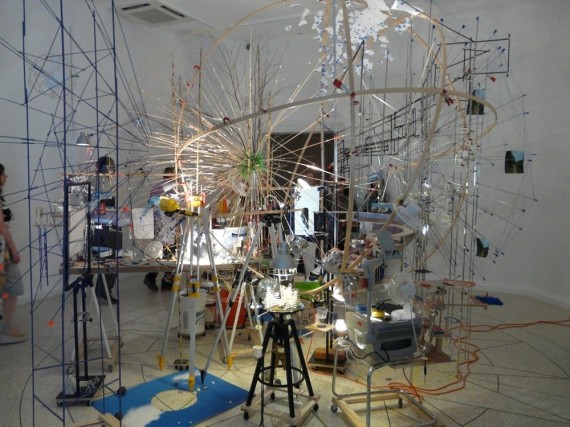 Having come direct from a tranquil two-week artist residency in Ibiza, the rush of Venice preview week makes for a sharp change of pace to say the least. With hundreds of exhibitions, talks and events on offer, I find myself pacing around the leisurely alleyways of the city to catch just a fraction of the work on show.

At the Giardini, one of the two main biennale sites, the British pavilion stands central and imposing, echoing its former empire status when it was built in 1887. In somewhat uncharacteristic form, Jeremy Deller literally paints a picture of British heroes and villains for this year’s UK presentation. Large-scale, airbrush-style wall paintings depict, amongst other things, 19thcentury artist and political reformer William Morris tipping the luxury yacht of Russian oligarch Roman Abramovich into the Venice Grand Canal.

Wearing a matching pair of hot pink jeans and hat at the preview, Deller told me that mounting a ‘straight’ exhibition rather than the event and situation-based work he is known for was both a conscious decision and personal challenge for him. While this departure is undoubtedly a brave move to take at this career-defining moment, the slickness of the show undermines the poignant critique carried in previous works. The tea stall and banners, familiar Deller motifs, are present, but with less pizzazz than usual. I later hear that a controversial banner and posters about Prince Harry and his role in Iraq, bearing the words ‘Prince Harry Kills Me’, has been withheld from the show, supposedly to head off potential security threats.

Flanking the British on the left and right are the French and German pavilions, this year trading places, perhaps as a reflection of their growing alliance as Europe’s power couple. While France is represented by a dependably strong symphonic film installation from Anri Sala, the Germans populate their temporary home with works by four non-German artists. Subtle film and photographic works by Santu Mofokeng and Dayanita Singh, which touch on subjects such as transnational identity and ancient tradition, are tucked away in side rooms, while a large installation of interlocking antique stools by Ai Weiwei commands the main central space.

Recently described as ‘a man who makes art matter’, the Chinese artist features in two more shows across Venice: Straight is an installation piece reminiscent of a fractured landscape and made up of straightened steel rods recovered from poorly-constructed school buildings that were destroyed in the Sichuan earthquake of 2008. A new work, S.A.C.R.E.D., features six large diorama-like iron box structures depicting the artist’s experience while under house arrest in China in 2011. It’s been suggested many times before that Ai Weiwei’s public profile often overshadows his work, and having encountered these works already on numerous news sites, I find myself wondering if there is anything further to be gleaned from being in their presence.

Over at the Arsenale, Wang Chunchen, curator of the Chinese pavilion, describes Ai Weiwei as a “special example” who cannot in any way be taken as a general representation of Chinese identity. The curator wants to use this show as a platform to specifically articulate to the West that “Chinese art is more diverse that we might imagine.” He brings up an important point that, in the rush to embrace Ai Weiwei’s critique of China, we perhaps carelessly ignore our own political and societal shortcomings.

In the year that China has overtaken the US as the world’s number one art market, China is present in volume at Venice, with over 400 artists showing works in a range of exhibitions across the city. Wang says: “The [Chinese] Ministry of Culture has become more tolerant, they see the importance of the biennale, and want to go forward, to be more universal.”

A notable work in the show is the backlit photographic piece, Temporary Ward (2008) by Wang Qingsong, made in the Northern Stage theatre in Newcastle and featuring a cast of locals posing as A&E casualties, displaying open wounds and other horrific injuries. Read in this context, the work could be perceived as a portrayal of the ailments of the West.

At the Greek and Portuguese pavilions, artists take on their country’s debt crises in differing ways. Undeterred by the Portuguese Cultural Ministry’s unwillingness to financially support this year’s biennale presentation, artist Joana Vasconcelos decided to carry on regardless: “We [Portugal] need to keep on going even though we don’t have the means to do so,” she told me.

In her presentation for the biennale she shows no qualms about leading the way forward. A solution to costly property rental in Venice presented itself in the form of a decommissioned 1960s ferryboat, towed all the way from Lisbon and installed on the Grand Canal. Using her signature styles of knit and crochet, the artist has refitted the vessel’s interior with a crafted installation, conjuring a fantasy world, which could be set deep in the innards of some mythical sea creature.

The stylised and well-made work I watched (no production budget issues evident here) depicts a young African immigrant collecting scrap metal in a shopping trolley, amidst a dark and derelict urban landscape. An abrupt conclusion to the film is reached when the character happens upon a bin-bag full of paper flowers made from euro banknotes – message understood.

Sarah Sze’s wonderfully chaotic installation webs its way inside, out and across the roof of the USA pavilion. Angle-poised lamps, packaged food products, string and tape are just a few of the miscellaneous items she uses to construct finely balanced works, suggestive of industrial sewing machines, mini amphitheatres and the imaginary interiors of globe-like structures.

Looking to the heavens

Located in a prime spot between the Giardini and Arsenale, Wales shows off its intent with a strong show by Bedwyr Williams that offers much more than the pre-press would suggest. Beginning with an astronomer’s model, a tribute to ‘the amateur in a professional world’, the exhibition becomes progressively more off-kilter as it moves from room to room, culminating in a film installation pulling together an unlikely range of references, from childhood daydreams to S&M and wallpaper patterns.

The Scottish pavilion is further afield and contains work by three Glasgow School of Art alumni. Floor-based photographs are coupled with what look like evaporated ink paintings in trays in an intriguing installation by Hayley Tompkins. Corin Sworn is represented by three works, including a group of photographs, separating out figures and landscapes into distinct colours of red, green and blue, the context suggesting a possible commentary on nationality.

Duncan Campbell takes a brave decision to show two relatively long video works, the first having a soundtrack in French and the other only beginning when the first finishes. As you might expect, most visitors don’t hang around. A 35-minute film essay from 1953 by Chris Marker and Alain Resnais, Les statues meurent aussi (Statues also Die) is used to comment on the value of cultural artefacts, and a new one-hour long film by the artist, It For Others, combines both new and archive footage to elucidate on arguments outlined in the Marker/Resnais work; it includes a performance collaboration with Michael Clark Company.

My day reaches an end with a last minute visit to biennale virgins, the Holy See. The aim of the show is to rebuild relations between art and faith, ‘a relationship that went through a divorce’ as stated recently without irony by the Vatican’s ‘culture minister’ Cardinal Gianfranco Ravasi. Three walls of projections by the artists Studio Azzurro fill the central room, depicting life-size figures placing the palms of their hands up to a glass panel, perhaps reaching out to an imagined or desired audience.

This show doesn’t look nearly so out of place as I expected it to. It seems that the realms of contemporary art know no bounds – anyone is free to join this club if they can present themselves suitably. Rather than a parting of ‘art’ and ‘faith’ as the Cardinal has suggested, perhaps it’s more a case of art having eclipsed faith. While that may well be my current perspective talking, as I write this amidst a floating city of art, it’s clear that, in the words of long-time Biennale president Paolo Baratta, ‘contemporary art is flooding the world’.

The 55th Venice Biennale opens to the public from 1 June – 24 November. www.labiennale.org