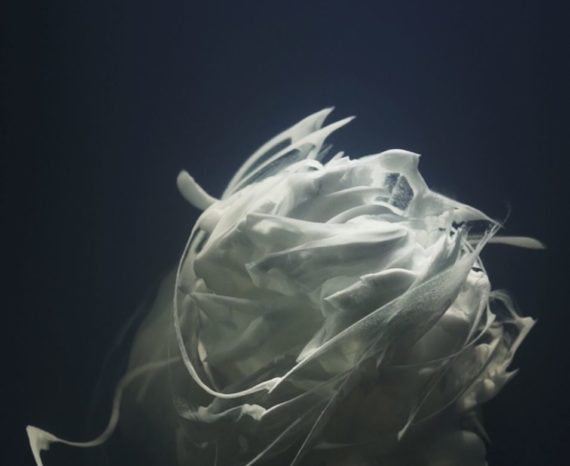 Norwegian artist Solveig Settemsdal has won the Jerwood Drawing Prize 2016. She receives the £8,000 award for her video piece Singularity (clip below) which follows a transformative process generated by white mineral ink being suspended in a cube of gelatin.

Having graduated from Glasgow School of Art in 2010, Settemsdal, whose work treads the line between sculpture and photography, holds a studio at Spike Island in Bristol.

The £5,000 second prize goes to Anna Sofie Jespersen for Sid in Bathtub. This work in ball pen on tracing paper depicts a fully-clothed man lying in a bath and infers an underlying narrative of tragedy or loss. The Danish artist lives and works in London, where she is currently undertaking her undergraduate degree in fine art at Chelsea College of Art.

The two Student Award winners are Jade Chorkularb and Amelie Barnathan, who each receive prize money of £2,000.

For That What They Would Say, Chorkularb asked a number of people what they would do if they only had one hour left to live. Their responses are accompanied by raw and expressive real-time drawings in a video that unearths the humour and simplicity of purpose with which people envisage their final moments. Born in Thailand, Chorkularb has an MSc in Interactive Multimedia and is based in London.

Currently at the RCA where she is studying for an MA in Visual Communication, Italian-French illustrator Amelie Barnathan creates large-scale drawings that interweave narratives such as the Maenads of Ancient Greece with processions of witches from the middle ages. Her drawings, while surreal and exploratory, deal with historical depictions of women, their spirit and behaviour.

The four prizewinners were selected from a shortlist of the 55 artists whose 61 artworks can be seen in the prize’s touring exhibition. The panel of judges – artist Glenn Brown; Stephanie Buck, director, Kupferstich-Kabinett at Staatliche Kunstammlungen Dresden; and Paul Hobson, director, Modern Art Oxford – assessed 2,537 artworks by 1,408 entrants before making their final selection.

Running since 1994, the annually-awarded Jerwood Drawing Prize is led by its founding director, Professor Anita Taylor, Dean of Bath School of Art & Design, with the aim of championing and promoting the excellence and breadth of contemporary drawing practice within the UK. It is funded by Jerwood Charitable Foundation through Jerwood Visual Arts.

Jerwood Drawing Prize 2016 runs from 14 September – 23 October 2016 at Jerwood Space, London. Between November 2016 and April 2017 it will tour to The Edge in Bath, Turnpike Arts Centre in Leigh, and The Gallery, Arts University Bournemouth