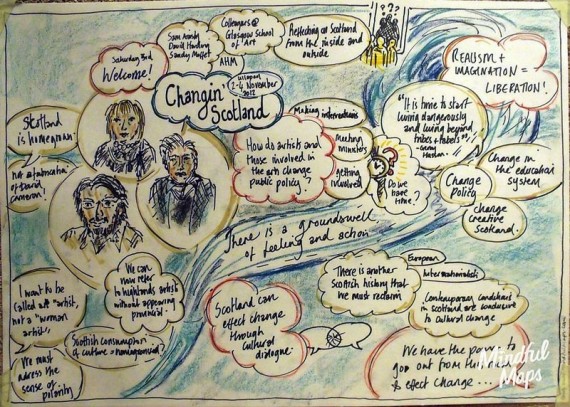 Introduced by writer and commentator Gerry Hassan and Highlands and Islands MSP Jean Urquhart, ‘Changin’ Scotland – The Role of the Arts, Culture and Identity in Scotland’ took a ‘Yes’ campaign slant on how Scottish cultural identity could help educate public opinion on Scotland’s independence referendum in 2014.

The conference was organised by artists and facilitators AHM (Sam Ainsley, David Harding and Sandy Moffat), who in 2011 produced the State of Play – Art and Culture in Scotland Today symposia. In their opening session, and in light of having attended the open public meeting at Glasgow’s Tramway on October 31 which addressed the need for change at funding body Creative Scotland, AHM asked: “How do artists and those involved in the arts change public policy?”

Further sessions followed over a full day on the Saturday, with a screening of ‘Brigadoon’ in the evening, and two morning sessions on the Sunday. Representatives of Scotland’s cultural sector presented their ideas, followed by open discussion facilitated by AHM. The role of cultural action as a stimulus for social transformation and political change was discussed in terms of national institutions, such as the Royal Scottish Academy, the role of Creative Scotland, and events in recent Scottish arts history such as ‘Windfall 91’, a seminal artist-led exhibition in Glasgow involving Scottish and European artists. All sessions were visually recorded through drawing by artist Emily Wilkinson.

There was strong support for Scottish independence throughout the three days. Artists such as Jim Mooney and Roderick Buchanan, art historians, politicians, poets and literary figures such as Janet Paisley and Alan Bissett, as well as former representatives of what was the Scottish Arts Council, including Sam Ainsley and Lindsay Gordon, put forward arguments that harkened to late ’70s Scottish nationalism and its influence in the arts in the ’80s and ’90s. Creative Scotland was also scrutinised on its dismantling of the specialist voice of artists at board level.

A strong argument came from Malcolm Maclean’s Saturday morning session ‘Out of the Invisible: The role of the visual-arts in re-imagining Gaelic Scotland’. In presenting historical events that dealt with the promotion of Gaelic language through visual art, Maclean put forward ideas on how artists can project change through media coverage and a public voice.

He commented: “The blank canvas of giving artists full license to realise their ideas whilst working with the Gaelic language – Proiseact nan Ealan’s foremost ethos – in turn allows an effective politicisation of ideas… a slow-burner effect of instilling social and political movement.” Foundation funding was this year withdrawn from Proiseact nan Ealan by Creative Scotland.

The importance of history

Craig Richardson’s Saturday afternoon talk, ‘Scottish Art since 1960’ discussed historical definitions of Scottish contemporary art in light of post-modernism, Thatcherism and devolution – all reference points that were brought together in the conference to promote 2014’s independence vote, and to politicise the creative act.

Anchoring social change to artists’ responses, Richardson stated: “An insurance policy for Scottish artists is the knowledge of their recent art history, a record of which has been difficult to trace in a British sense… to look at the topology of Scottish visual art since 1960 unearths either exclusion or inclusion – a predicament the artists’ national confidence will face in upcoming political shifts.”

Ewan Morrison’s later talk, ‘The role of great art and art education in social transformation’, questioned whether social change is indeed possible through the work of artists. He instead suggested that such tasks should be left to politicians. He said: “Artists feel the need to symptomatically respond to politics, yet successful practitioners have responded instead with entrepreneurship in order to survive.”

With many artists now avoiding the art market to pursue alternative ways to make a living, context-specific work is realisable, as are socially engaged projects that look to the community. Yet this type of work is clearly dependent on funding.

Much focus was brought back to Creative Scotland’s role. It was characterised as a product of decisions made by governmental shifts ignorant of Scotland’s international cultural standing and overly focused on activity in the central belt (Edinburgh and Glasgow). The overiding message of Changin’ Scotland was that the change brought about by being an independent nation would allow for inclusivity, rather than exclusivity.

‘Changin’ Scotland – The Role of the Arts, Culture and Identity in Scotland’ took place 2-4 November, in Ullapool, Scotland.