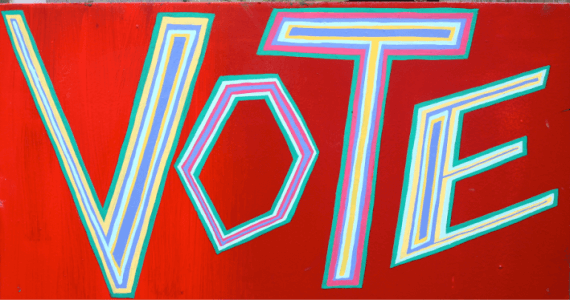 A new series of artworks celebrating democracy and encouraging people to vote will go on display on billboards across UK this April, in the run up to the general election.

Vote Art will feature images by Bob & Roberta Smith, Fatima Begum, Janette Parris and Jeremy Deller, each incorporating the word ‘VOTE’. A national competition to find a fifth artwork created by a first-time voter (aged 18-23) has also been launched, with the winning artist – selected by a panel including the four Vote Art artists – receiving £500 as well as the inclusion of their work in the campaign.

Ten commercial billboards have been secured for the project at sites near galleries, museums or places of cultural interest including Baltic Centre for Contemporary Art, Gateshead, and Turner Contemporary, Margate.

And a crowd funding campaign, hosted by the Art Fund’s Art Happens scheme, is looking to raise £15,000 to enable up to 20 more billboard sites in towns and cities around the UK to be used. Rewards for donating to the campaign include postcards, limited edition artworks and studio visits.

Vote Art’s project director, Matthew Couper, believes the billboards will get people thinking about voting as a creative act.

He said: “If you’re an artist or interested in culture, you care about expressing yourself. Surely one of the most basic but vital forms of self-expression is the act of voting and making a choice about the people who lead the country.

“We hope the artwork created will inspire people to vote, to think about creativity and to appreciate some outstanding creative practice.”

Vote Art will also distribute 10,000 postcards to arts venues across the UK, and an exhibition of work created for the project will open at Peckham Platform on 2 April. A closing party is planned for election night, 7 May.

Jeremy Deller said: “Political parties put up posters asking you to vote for them; we are putting up posters, just asking you to vote. Elections are a once-in-every-five-year opportunity for everyone to make a choice, and I think we should take the chance by the horns. Youth of Britain – rise up and vote!”

Entries to the competition are free and open at www.voteart.co.uk
Deadline: 20 March at 6pm.