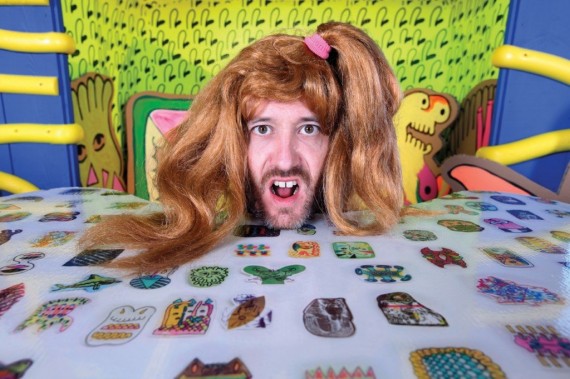 Whitstable Biennale, the festival set in the small fishing town on the north Kent coast, has announced full programme details for its 7th edition, to take place 31 May – 15 June. As with previous years, the programme will make use of unusual spaces across the town and is rich in time-based works including visual art, film and performance.

A number of works will explore the theme of hospitality and participation. John Walter’s multi-media performance and installation Turn My Oyster Up will see the artist act as host of a ‘slang bar’ set in one of Whitstable’s beach huts. Walter will entice visitors in with verbal and visual games that reference the use of slang in comedy shows such as Round the Horne, provoking what he refers to as a ‘queering’ of the perceived local seaside culture. Walter’s performance will take place on weekends during the Biennale.

Mark Aerial Waller’s Welcome to the Association Area will present new and classic artists’ film and video alongside science fiction TV, video sharing and digital photography to explore the disjunctures that distance us, then connect us, to contemporary art. The hour-long looped programme will include early video works by Vito Acconci and VALIE EXPORT alongside recent pieces by Simon Martin and ‘video sharer’ Wet Canuck.

More permanent in nature is Abigail Hunt’s Limited Edition artwork for children. Hunt’s aim is to produce an edition of the piece for every school child in Whitstable as a way to encourage them to respond both to the artwork itself and to the wider biennale. The work will be available from the Biennale HQ, which is also host venue for Kieren Reed’s From the Ground up, (A) Social Building. Reed will create a new social artwork that will also act as a space where visitors can pick up information about the whole festival.

As announced earlier in the year, Louisa Martin and Rachel Reupke were winners of the 2014 Open Submission Award, receiving £1,000 each to create a new work for the biennale. Martin’s The Lighthouse: Scenes 1 and 2 will use performance as a ‘wider cultural lens through which to consider the subjective effects of our relationship with the digital world’, while Reupke’s Letter of Complaint features the live voiceover of a bitter and neurotic complainant to accompany a series of ‘tableau vivant’ performed by the artist.

Whitstable Biennale: Small for a reason – Pippa Koszerek talks to Director Sue Jones during the 2012 edition