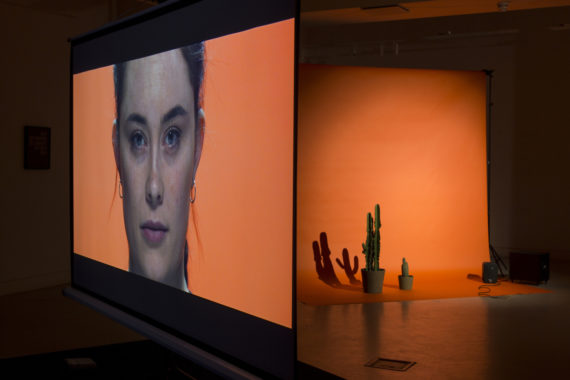 In an overheated room above the Whitstable Library, two figures stand at lecterns, competing to share their view of the world with the audience. “I am one with the people!” he thunders from his screen. She counterpoints: “How do you know what a pretty woman wants?” They never interact but their dialogue sets up their conflicting positions, both seemingly unaware that each speaks from a deeply internalised gendered experience of life.

Both look familiar; he reminiscent of JFK, her any of a number of white western middle-aged female politicians. She is making a point of being professional and strong, while at times breaking down into stereotypical emotionalism. He remains compartmentalised and lacking in nuance, performing his role without complexity or doubt. Until, that is, he is seen ‘off camera’, laughing at his own nonsense.

In this multilayered video installation, titled I am one with the people, artist Phoebe Cunningham deconstructs gender politics, simultaneously having her actors perform electoral politics. The script edits together excerpts from existing film and TV, creating a disjointed narrative which leaves space for the characters to build and reveal themselves. Ultimately, it’s a powerful demonstration of factors that make the political domain dysfunctional. As a work of art it is very clever, and extremely well done. 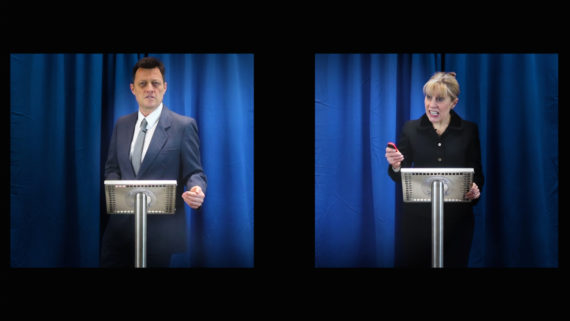 Powerful in a different but no less effective way is Slow Violence by Kihlberg & Henry. In another complex film work, the nature of how language forms and loses meaning is explored. Two young people start to deliver an academic lecture, with all the intense sincerity of recently educated youth. It’s a wonderful example of artspeak, replete with gnomic statements like “the presence of a body structures a space that contains it” and an explanation of “a 2D reality that forms a tyrannical illusion”. But the assumed profundity is soon fractured in a demonstration of how easily language becomes meaningless, through repetition, volume and familiarity.

In a nod to structuralist theory we see how language only works through our collective agreement to give individual words meaning – a rose is still a rose by any other name, but we wouldn’t know how to describe it without agreeing to call it a rose. With increasingly frantic visual imagery and aural intrusiveness, in the end all that is left for the viewer is the experience of being acted upon with slow violence.

As usual under Sue Jones’ directorship, the Whitstable Biennale has an emphasis on narrative and language, ensuring its distinctiveness from other art biennials. Closely integrated and reflective of its charming seaside locale, the Biennale has commissioned 35 new works from mainly young emerging artists. Each work repays attention to fully appreciate the thoughtfulness behind it. 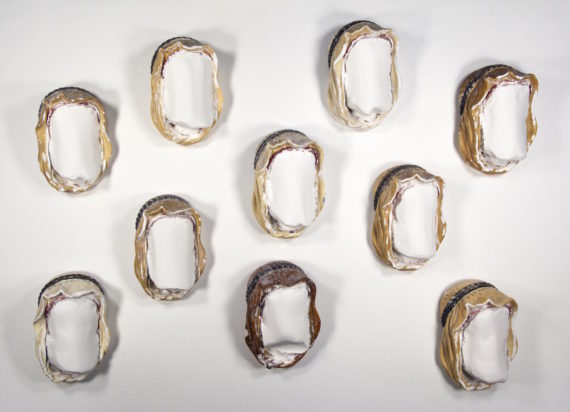 One such work, The Syrian, resonates with symbolism once you understand the artist’s process and motivations. Leigh Clarke first worked with this topic in 2014, when Aleppo was being bombed. This is his very personal response to the refugee crisis, the grey of his wallpaper design illustrating how this issue is fading into a grey background consciousness in the UK. The faceless relief heads (made from a mass-produced collectable Bosson wall plaque) suggests a Western emotional distance while also referencing flesh-stripped bone, or teeth; matter and life stripped to its basics.

Deborah Levy’s novel Swimming Home is the inspiration and loose theme for this ninth edition of the Whitstable Biennale. In Levy’s book, trauma, displacement and its aftermath are explored, along with the strategies individuals might use to cope with difficult experiences and turbulent personal histories. Many works do indeed seem to be connected with this theme, perhaps to the exclusion of a greater variety in the form of works and subject matter. There are none of the complex visual art installations that featured in previous biennales for example, and the curated artists’ short film programme, while worthy, is also overly didactic.

But there are a substantial number of live-art performances that lighten and vary the screen time, including Restaurant from the accomplished Patrick Cole. If you’re able to catch him, you will hear surreal stories of a goldfish with lungs that responds to CPR, a dead bee, and a very funny self-help recording. Sophie Lee has made an immersive sound work for the bell tower of St Aphege Church, inspired by the writings and composition of medieval nun and mystic Hildegard von Bingen. Mixed with contemporary field recordings from pop songs and clubs, it seeks to become a transcendent experience. Deborah Levy herself reads from three short texts specifically written for the Biennale, and there is a full programme of other events as well as a Satellite programme.

This is the first edition of the Whitstable Biennale since becoming an Arts Council England national portfolio organisation. It now has four years stability and planning time, and “a brand new remit,” says Jones, including the ability to work between biennials on the north Kent coast. “We’re not a project anymore, we’re an organisation,” she says. As a project, they have always produced an exquisite gem of a biennial; as an organisation, there is real anticipation about how this gem will sparkle in future years. 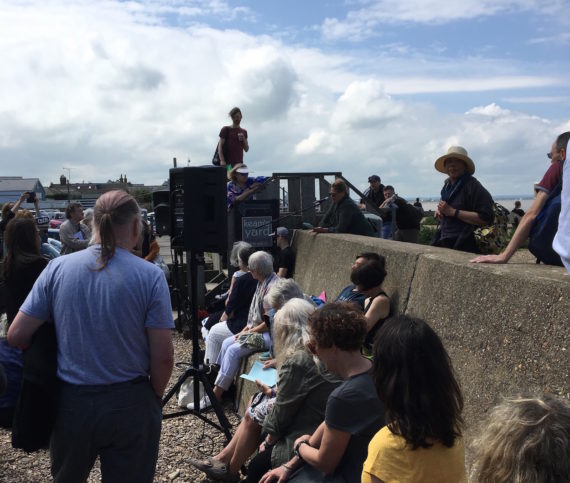