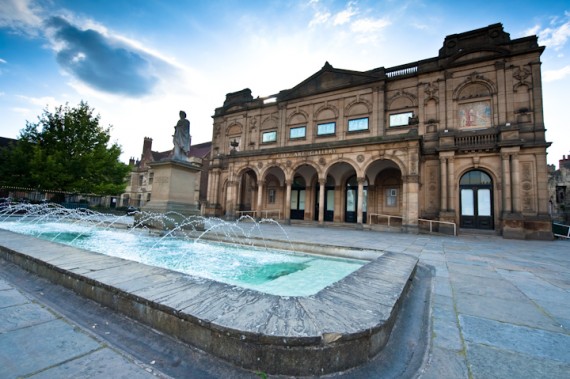 York Art Gallery is about to reopen following an £8million, two-and-a-half year redevelopment that has seen the venue expand its exhibition space by 60%.

The renovation, handled by architects Ushida Findlay, is superficially slight – from the front of the gallery nothing much has changed and the basic footprint of the building has been retained. But the redevelopment is both practical and sensitive to the gallery’s needs as Janet Barnes, Chief Executive of York Museums Trust explains: “We didn’t want a lot of fuss in terms of design, we wanted to remain true to the building itself, to bring out the best in the building.”

A second new exhibition space, built above a previously single-story gallery, houses the recently gifted Anthony Shaw collection of studio ceramics. Its external wall is covered in fetching hexagonal, ceramic tiling that resonates with the collection inside. Once the gallery completes a new artists’ garden space behind the building, later in the year, visitors may appreciate this architectural addition. For now the new wall is unfortunately only really visible from a private car park adjacent to the site.

The inauguration and naming of CoCA consolidates York Art Gallery’s collection of over 5,500 ceramic objects, including the UK’s largest collection of British studio ceramics.

“Naming is important because you have to back it up,” continues Barnes. “We can back it up with the size and quality of our collection but also by the archive materials that we hold.” Her point is elaborated by Helen Walsh, Curator of Ceramics:

“We’ve got a massive amount of archival material that fleshes out the story of those pots and the people who made them, that really informs people about these artists who have been working in 20th and 21st century.

“Studio ceramics is not that well known about, apart from by enthusiasts, it’s a hidden area of British modern art which is overlooked.”

The ceramic collection began in the 1950s with a bequest from Eric Milner-White, then grew considerably in 2001 when a Wakefield librarian WA Ismay donated over 3,500 pieces. Walsh believes that the gallery’s approach to exhibiting this collection attracted further gifts:

“We started doing quite experimental exhibitions where we’d put pots next to the fine art for the first time, or we’d mix it up with archeology and social history collections to re-interpret what they are, and that started grabbing the attention of other collectors.”

While the redevelopment was primarily about the gallery’s collections, and this focus is evident throughout the opening exhibitions, these also act as a springboard for contemporary commissions.

Mark Hearld’s The Lumber Room: Unimagined Treasures combines his own collages and ceramics with a miscellany of objects drawn from York Museums Trust’s wider collection (including York Castle Museum and The Yorkshire Museum). Ceramics by Philip Eglin, based on the motif of mother and child, are integrated with Italian Renaissance paintings. Artist Susie MacMurray also responds to the Renaissance collection with Halo, meticulously constructed from thousands of gold plated wires.

An aim of the commissions – according to Laura Turner, Curator of Fine Art ­– is to continue a dialogue between fine and decorative art collections:

“It is only recently that fine art and decorative art have been so separate,” she explains. “For centuries these artists worked together and were viewed on the same plane. We want them to have equal status and to show the interrelationship between the two.”

For Turner, the most exciting aspect of the redevelopment is the increased range of work it enables the gallery to show. New storage facilities and a loading bay, plus climate control and security systems, satisfy insurance requirements to receive important exhibitions and loans. Planned projects include a trans-historical exhibition about flesh including painting, sculpture, installation and video where previously the galleries “just weren’t suitable for this kind of show.”

Backstage additions like storage may not be glitzy, but do demonstrate the investment galleries need in order to care for artworks. York Art Gallery’s building opened in 1879 and, apart from 1950s modifications following war damage, has not undergone significant renovation since. Planning for this redevelopment began in 2002 (the founding year of York Museum’s Trust) yet it was not until 2011 that bequests totaling £2.2million from Karen and Peter Madsen started the project in earnest. Further funding came from Arts Council England, City of York Council and 14 other individuals, foundations and trusts.

Galleries need to be financially savvy, and future income generation is built into the redevelopment by way of a shop, café and private hire opportunities. Disappointingly the gallery will also now charge £7.50 for adult entry (children remain free). The charge, which demonstrates the increasing financial pressure that regional galleries find themselves under, puts a damper on an otherwise impressive project. The refurbished galleries highlight York’s rich and unique collection. It is a collection that needs to be cared for, but which will now only be accessible for those who can afford to pay.