Yuri Pattison: "There needs to be more knowledge sharing within the London art community" - a-n The Artists Information Company 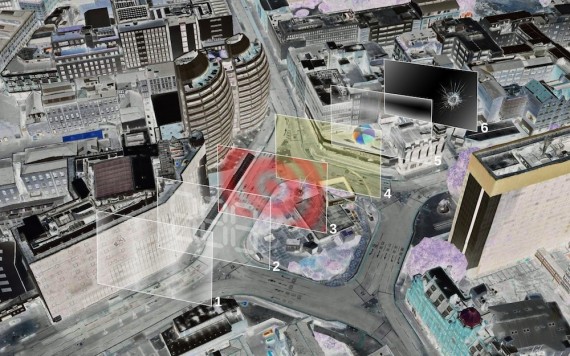 I meet artist Yuri Pattison in an orange and white acrylic pod that swells from the frame of a former carpet factory on East London’s Hanbury Street. This is the canteen restaurant at Second Home, the co-working space and creative hub founded in 2013 by entrepreneur and former policy adviser to David Cameron, Rohan Silva. Located in the heart of Shoreditch and within the government-supported Tech City quarter, Second Home was conceived as a ‘physical social network’ offering ‘Work + Life’ space to digital creative businesses.

From our table we can glimpse the offices, workrooms and event spaces in Second Home’s members’ area. Designed by Spanish studio SelgasCano, the retro-futuristic landscape of curved transparent screens, mismatched vintage chairs, a ‘flying’ steel meeting table that can be hoisted to the ceiling, and over 1000 hydroponically-growing plants, has prompted comparison to the visions of radical 1960s groups Superstudio and Archizoom. It has also been described as ‘the coolest start-up office in London’.

With notions of transparency, fluidity, flexibility and productivity woven into its architecture, Second Home embodies the ideals and buzzwords of the corporate tech industry. For Pattison, whose practice aims to expose and explore the effects of networked technology on society, it also demonstrates an important shift in the ways people are living and working together, as boundaries between social and work space are becoming increasingly blurred. It’s an area that Pattison is currently looking at as part of his Chisenhale Gallery Create Residency.

“I was interested in the trend for tech spaces like Google or Facebook to insinuate – by providing free good-quality food, nap and play spaces – that their workers should always be there,” he says. “Here [at Second Home], it’s a lot less invasive but there’s definitely this idea that the space should feel homely and comfortable.”

As offices are simulating homes, the home as workspace is also a growing trend as digital technologies are allowing more people to do their moneymaking without leaving the house, enabling businesses and property developers to capitalise on the live/work model. “People are thinking of this in relatively short-term brackets but the home has always been a workspace to some degree,” says Pattison. “Traditionally it’s a thing that a lot of artists did. The whole idea of the tech industry disrupting through creativity seems to be very influenced by art strategies.”

Looking beyond both the seclusion of the ‘box’ artist’s studio and the increasingly gentrified live/work model, Pattison has joined London Hackspace (LHS), a community-led hackerspace just outside Shoreditch. A workshop for sharing tools and knowledge in a range of fields from robotics to woodworking, biohacking to knitting, for Pattison it proposes an alternative model for cross-disciplinary creativity. Founded in 2009 and now with a thousand-plus members – including many Tech City workers who use the space to develop their hobby interests or personal start-ups – LHS is the burgeoning grassroots of London’s tech ecology.

Like Second Home, LHS occupies two floors of a former industrial building, has communal workrooms and event spaces and is open to its members 24/7. However, its constitutional aims of transparency and social collaboration are manifested not in sleek, curving acrylic but in its wiki, its publicly shared chat forum, and its weekly open evenings. Here, mismatched chairs are more threadbare sofas than ’60s design classics, and plant life is wildflower posies in old jam jars rather than a hydroponic garden – this is homeliness by default rather than design.

“There was no plan for it,” Pattison says, “so it’s very imprinted by everyone who’s in the space. You have this amazing thing where people’s crazy projects are put up on the wall in messy glass cases. I like that; it doesn’t have its philosophies encoded in the space.”

LHS’s non-hierarchical, peer-to-peer network recalls the true ‘sharing economy’ of the early internet, where information and advice was given away for free to the benefit of the community. Unlike the spurious models of sharing-based businesses such as Airbnb or Uber (“It’s not a like-for-like share if someone is heavily monetising it in between”) the Hackspace shows an openness and inclusivity from which, Pattison believes, the art world could also learn.

“In London the industry of art is a big thing and it’s almost like you have trade secrets – people are surprised if you tell them where you got something printed, where you found that material,” he says. “It’s like if you give it away your work will be worth less, somehow. There needs to be more knowledge sharing within the London art community – not just this critical sparring – if contemporary art is going to still serve a useful purpose.”

The politics of shared workspace and transparent approaches to working together are central themes in Pattison’s current body of work, Enquire to Annotate, which he launches on Wednesday 22 July with a presentation and discussion event at Second Home. Marking the mid-point of his 18-month Chisenhale residency, the work takes the form of a website and series of digital sculptures that open up his research in a kind of beta-testing phase.

As in earlier works where Pattison has traced the edges and architecture of networked space, the website aims to make visible the flows and loops of data that are usually hidden behind user interfaces. Similarly, by acting as local servers that store parts of the website content, the sculptures reveal the physical reality of what Pattison describes as “this very light, fuzzy idea” of cloud computing.

“It’s this new mysticism around technology,” he says. “It completely obscures that your data is on a server somewhere, someone owns that server, someone probably has access to that data, so they have some ownership claim over it. Companies are like snake-oil salesmen, they’re marketing their product but don’t tell you how it works, or if it really works, just ‘we’ll do this amazing thing that’ll change your life’.”

Enquire to Annotate explores the notion of transparency in relation to big data – the ways data is processed and represented to serve a particular purpose, or to influence subjective connections between data sets. It also considers the effects of network feedback, each of the sculptures incorporating a ‘big board’ modelled on the wall-mounted displays used in workspaces to share statistics and trending content.

Together, the website and sculptures form an interconnected system that hosts, organises and feeds out new information, illustrating and perpetuating the narrative of Pattison’s inquiry. At the end of his residency in April 2016, final versions of the works will be installed in the Chisenhale Gallery in an exhibition inspired by various co-working spaces within Tech City, including Second Home.

The title, Pattison explains, condenses the shift that has occurred in our relationship to networked society – from Tim Berners-Lee’s vision of people working together by combining their knowledge in a world wide web, prototyped in his 1980 software project ENQUIRE; to our contemporary culture where there is the possibility for the internet to annotate or augment everything that exists.

“If you have your device you can instantly call up more information about an object,” he says, “but equally within the internet you have these layers of information, you have these new services like Genius setting a new trend of the commentary entering the text you’re reading.

“I think we’re coming to the end of the formal idea of the internet,” he adds. “But the idea of networked society is something we’ve created that will never go away.”