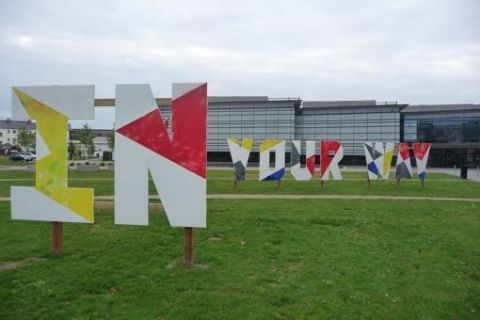 Locws international is a Swansea based arts charity, who commission artists from all over the world as well as from Wales, to produce works which respond directly to the city of Swansea, be that its heritage, its people, or the land and cityscapes. Each artist works at a specific site and makes their  unique mark upon it. There are 2 projects a year, resulting in a diverse range of works, most of which are temporary, some though have garnered such public approval they have become permanent features adding to the cultural richness of the city.

Twin brothers Tom and Simon Bloor, have cut out the phrase “Nothing Should Stand In Your Way” (also the pieces title) in large letters and placed them boldly facing outwards in front of the Waterfront museum, the phrase is one associated with the Rebecca Riots an historical event whereby farmers stood up to the local ruling forces of the day in protest at the instillation of toll gates across the country, these men changed history and remind us that the collective will of a few can be a powerful force. The text takes on a modern edge by virtue of its graphic almost graffiti like nature. The statement is as relevant today as it ever was, as much on an individual level as on a socio-political one.

Alex Duncan’s “Holocene” is a powerfully narrative sculptural piece. He has formed giant pebble like forms from polyurethane foam, cleverly blurring the boundaries between the natural and man made world. The title “Holocene” refers to a newly coined term which describes a new epoch of time in which man’s influence on the natural world has and is so great that it is literally changing the face of the planets geography for ever. These forms hark back to Swansea’s personal history of oil refinement and copper smelting and all of the accompanying by -products. The work was installed along the coastline, chained down and left to move with the natural ebb and flow of the tides, it has however due to outside tampering been moved to the Waterfront museum, where although it has lost its engagement with the coastline it has retained all of its ambiguity and impact.

Figurative sculptor Laura Ford has produced a new piece entitled “Little Bird” which stands alone at ground level at the top of Princess Way. Instantly intriguing and engaging, “Little Bird” could be a lost child amidst the busy passers by, its vulnerability accentuated by the fledgling bird costume within which it is clothed. The work skilfully draws out a duality of feelings from the viewer, both protective and repellent as “Little Bird” also takes on a sinister edge with its lack of features and the fact that it could have been tarred and feathered, rendering it a potential outcast for some unknown sinful act.

Rhys Himsworth’s “Industrial Revolution” is a large scale ambitious piece, that affects the viewer on a multitude of levels. The piece is a free standing box covered with digital screens and speakers, which show a seemingly random collection of ever changing words passing over them as they are simultaneously spoken through the speakers. However they are not totally random, utilising the internet Rhys has taken the words industrial revolution and entered them into Wikipedia, a computer programme then begins a linguistic journey through hyper links associated with the initial words. It cleverly shows us that every aspect of our lives has indeed been affected by technology. Visually the work looks akin to a digital display one might see at an airport or train station, although this journey is taken standing still! The words move like water across the screens and become visually hypnotizing after a while and the wall of sound becomes an audio representation of the hectic nature of our industrialized lives.

Maider Lopez’s “Trees” is a subtle piece of work that blends almost invisibly into its surroundings. The artist was interested in how the council had planted trees in the middle of pathways potentially obstructing walkers. She has therefore used the tree itself as her medium, planting several in a small congregation beside a pathway, perhaps highlighting the rigidity of the initial planting.

Bedwyr Williams’s “LionHeart and Lightsout” is a clever, quirky piece of work, and lies on the ground as a modern day memorial to an event which if it wasn’t for CCTV cameras and You Tube would have simply been a story to be told by the two men who the work revolves around. The duo happened to be out one night for a friends stag do dressed in drag, unbeknownst to a drunken man looking for a violent interaction they were professional cage fighters, and when a fight was provoked he was floored and taught a rather harsh lesson. The captured event became a sensation. Williams’s work makes reference to the Hollywood walk of fame with brass plates in the shape of two pairs of high heeled shoe prints embedded into the ground, perhaps in the stances that they were fleetingly in.  A covert piece of work, yet powerful in its message, a moment captured on film is immortalized digitally, this permanence is reflected in the unmoving prints now at home on the pavement.

There are four past projects that have become permanent fixtures within the city.

Bermingham and Robinson’s “The British Empire Panel Project” is a stained glass instillation above the doors to the beautiful Brangwyn Hall, it takes its colours from a blown up section of the stunning frescos that cover the walls inside. The glass panels take on a tessellating triangular pattern, modern yet almost reminiscent of art deco design. As light spills in from outside in the day it adds a rich kinetic dance of colour to the floors, and at night as light spills in the reverse direction the panels provide a welcoming glow perhaps hinting at the wonders to be found within.

Niamh Mccann’s mural “Flock of Ospreys Looking For the Old Blind Sea Captain Who Dreams of His Deceased Sea Fellows Under a Visiting African Sun” takes its catchy title from various references including the work of Dylan Thomas and the Swansea rugby team the Ospreys. It resides behind the Dylan Thomas Theatre and is a well painted piece rendered in a boldly linear graphic style, made all the more interesting by its canvas, a giant pair of partially drawn concrete curtains.

Jackie Chettur’s skilfully made project “..It Is 89 Days This Morning Since We Left The Mumbles Head” is a brilliantly accessible series of viewfinders  within which are a combination of 2-D images and 3-D objects which when looked at through the lenses appear to be almost holographic in nature. There are a series of these boxes very reminiscent of seaside telescopes, which depict various historical ships involved in the import and export of goods from Swansea. They are windows through time, brilliantly whisking the viewer out of the present moment.

Finally Simon Whitehead’s brilliantly conceived “Walking Between Craters” is a mapped out journey between different sites that were destroyed during the second World War, at each site a mobile phone can ring a specified number to hear a recorded message of an individuals personal account of the bombings. This work is a conceptual memorial, a ghostly reminder of times gone by and how the past’s scars are always present on the landscape no matter how blurred with the modern they become. It is a walk through time and enables the participant to reach out and touch the past via the captured memories of both real people and the land itself.