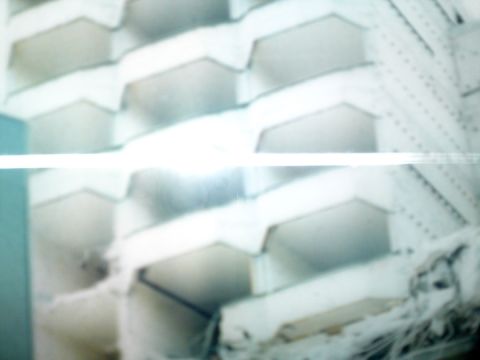 German London-based artist Edgar Schmitz’s practice resides within an intricate ‘hall of mirrors’, variegated surfaces of reflection, inversion, set-up, reversibility and multiplication drawn through cinematic, screen-based, sonic and infrequently theatrical terminologies, meanings and conventions. These production and post-production terms like ‘staging’, ‘script’, ‘sound check’, ‘trailer’, ‘ cameo part’, ‘photo shoot’, ‘props’, ‘montage’, play list’, ‘prompt’ and ‘frame’ are variously employed as the means to intercept on, or interrupt the multiple realities of a given or invited, devised or strategic situation such as a film, gallery, museum and/or exhibition. In Schmitz’s first major solo show in Scotland, at the Cooper Gallery, Dundee: “Surplus Cameo Decor”, this array of enquiry is animated as a collision mirage space buzzing within the set of an imaginary film, and cast with and within a sequence of real-life, real-time characters, political realities, institutions and cinematic spaces. These characters, situations and places/architectures are themselves historical, present and futuristic giving this elaborate, over-saturating project a timeline of ‘remoteness’, ‘presence’ and ‘expectation’. To conjure this ornate environment of fiction and reality, “real life and postcard view”, surveillance and confusion Schmitz uses reflective, seductive materials: neon, gold, two-way mirrors and shimmering glossy membranes: an atmosphere of fantasy and glamour, value and scrutiny, authority and perspicacity.

These themes drawn on recent and historical examinations of art and cinema, art and theatre: “Videodreams, between the cinematic and the theatrical” (Kunsthaus Graz), “Life, Once More” (Witte de With), “Cinéma Cinéma, contemporary art and the cinematic experience” (Stedelijk van Abbemuseum), “Superficiality and Superexcrescence” (Ben Maltz Gallery) and “Scene Shifts” (Bonniers Konsthalle), and in turn extend upon Schmitz’s recent works including “To go with the comet” (British Art Show 7), an ambiguous inhabitation of ‘threshold spaces’ to undermine the mechanics that surround the jurisdiction and coding of the ‘exhibition’, “filmic and proto-filmic components, affective scenarios and the motifs and disrupted logics of the movie trailer” in “Extra Added Bonus Material” (FormContent) and as subjective archetypal form in Liam Gillick’s “Edgar Schmitz” (ICA), where the artist is invited to ‘play himself ‘, a cameo as “source material referring to him as both the title and the content of the exhibition.” And further to a future staged, choreographed symposium form that projects “Surplus Cameo Decor” back, and upon, an invited group of curators and writers in “Hubs and Fictions”. Constructed as a forum investigating “relations that play out between gallery presentations, institutional aspirations and the ways they intersect with fantasies of elsewhere.” Which reads as a kind of scripted interaction where this group, which includes Guy Brett, Tom Morton, Markus Miessen and Gemma Sharpe, becoming protagonists in a two-way mirror ‘treatment’ with the subject of Schmitz’s mingling of art transacting, surveying, diffusing and set-up, further convoluted and plotted as dispersed engagements, extending a purposeful examination of de-localisation, at first the Cooper Gallery, Dundee, then the Baltic in Gateshead and finally at Goldsmiths College, London. And like all good drama it is a kidnapping, a blackmailing and a theft.

“Surplus Cameo Decor” works at the edge of cinema’s “exotic promise” and its tiered multiverse. An engineered action of precise overlapping simulacra, made from ‘conversations in many parts’ in many voices, and is it serialised and episodic – a triple-bill. The first part “Palasthotel” cues up a suite at the infamous STASI Ministry for State Security ingrowths of covert police surveillance, set-ups and blackmailing of its international guests. The second part is a glimmering gold pool cover from the villa “Horizontes Soroa” in Cuba and the third “Sindanao” its title from the fictional South China Sea island in the 1986 Ulli Lommel horror movie “Revenge of the Stolen Stars”, and a iridescent membrane evoking the plans for a futuristic supermuseum in Hong Kong.

These scenarios are replete with significant characters referenced in these alternating narratives, which includes Schmitz own biography as a storyline, appearing as themselves in cameo roles, a cinematic devise which often ‘breaks the fourth wall’, a technique of metafiction that penetrates the sheen between audience, fiction and reality in film, theatre, literature and visual art. Ulli Lommel appears, actor and now Hollywood director of horror films who worked with Andy Warhol in New York City after moving to the United States in 1977, after an extended period working with the German auteur Rainer Werner Fassbinder from 1967 in his native Germany. Lisa LeFeuvre appears, co-curator with Tom Morton of British Art Show 7, In The Days of the Comet, which featured Schmitz’s work over its own distributed and dispersed engagements and who is now Head of Sculpture Studies at the Henry Moore Institute in Leeds and Tobias Berger, curator of M+, a supermuseum of visual culture in Hong Kong whose presence represents an anticipation of unfolding possible narratives and outcomes.

Edgar Schmitz’s work – an antithesis of austerity – is a machine of invitation and its multiplying returns, a generating model of performative and discursive cycles, fluent in the broad cultural examinations of cinema and exhibited forms, alongside a detailed account of the liminal and the interstitial. It is populated with strategic characters, whose forms, functions and identities are interfaces between art, cultural and cinematic politics, power and authority. All the while it is decorated and adorned with the materials of seduction. In turn “Surplus Cameo Decor” evolves to become a reflecting rotating multiplex of social and behavioural mirrors.