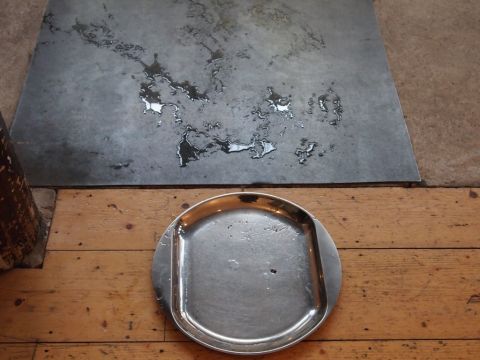 Creeping Buttercup is a collaborative piece developed by artists Ellen Southern and Clare Whistler during a Making Space research residency at Fabrica, Brighton between the 4th and 8th of March 2013.

I am first and I am early. I have been invited to a sharing of work by Clare and Ellen at the end of their collaborative week of research and experimentation at Fabrica, a gallery and artists’ resource in a converted Regency church in the heart of Brighton. I am early because I know the performance will start promptly and every second will be important; each moment will be part of a complex assemblage of ideas and actions.

Clare and Ellen are artists who work across a range of media, often using their own physicality to explore ideas and concepts, presenting the outcomes as intimate performance, on this occasion for an invited audience. Greeted by a welcoming woman dressed in black, I step inside and am guided to step onto a square of broken china pieces laid out on the floor just inside the entrance. The fragments crunch and crack – a disturbing noise in the quietness of the space. I can feel the sharp edges through the soles of my shoes.

The woman leads me onwards. Next I pause to read a hand written text on paper on the floor. I take my time, trying to digest it – it will be important I am sure.

A still, standing figure, dark hair, dark gown, eyes closed, elbows tucked in to the side of her body, thumbs touching fingertips, stands straight ahead of me. She is poised, waiting, internally focused, separate. She offers no response; no acknowledgement that she is aware of me; she is part of another world which perhaps I can observe but not enter.

I turn to the left where the welcoming woman instructs me to step into and out of a black, shallow, tray of water. I deliberately place my wet foot to make a print on the floor and then I am invited to sit on the steps which once led up to the altar. The big hall is empty save for the dark, still, standing woman, and now I notice a second figure far away on the raised gallery at the far end of the hall. She is outlined against the brightness of the high windows.

I am given a card and read the text – the same text that was on the floor:

must always be buried face down

would disturb the living

I become aware of two things: 1. the still, standing woman has begun tiny circular movements of her thumbs on her finger tips; 2. there is a high-pitched humming, ringing, slightly pulsating rhythm in the air. I’m not sure where it’s coming from.

More people arrive. More cracks and crunches of trampled china pottery, a growing wetness of footprints on the floor. A small group gathers on the altar steps. The humming grows: ringing, pulsating; circling fingertips and thumbs; an energy is slowly rising. Suddenly the still, standing woman is not still. Her fingers and thumbs stop circling upon each other, hands come together to unbutton and shed a layer of her gown, spread like a skin upon the floor. She bows face down onto hands and toes and begins to slowly spread, legs, hands, hair, stretching away from us, feet first, feeling her way with toes and fingers, gradually unfurling, rising, with a tapping sound made by trembling toes on the wooden floor. She turns aaway towards the companion still on high, stops, mounts a step, reaches for something and stands, facing away from us. A new hum rises; a higher note, ringing alongside the first. Now the standing figure above turns towards us; in the light her hands hold a clear long-stemmed glass, her finger circling the moistened rim rings out the crystal note, now matched by one from below. The figures move. The one below moves around the columns of the old church, grasping, clasping, stretching, scratching, squeezing life. From the one above comes a clear voice, a chant, a life-giving vibration that massages the heart. Eventually the dark figure below stretches flat, face down, earthed. Silence settles upon us, until the ringing of moist fingers on glass starts on high again.

The performance enters a new phase as the earthed figure moves, rolls, unfurls a fine pale ribbon with which she marks the zig-zagging cracks between the stone slabs of the floor, like a pale creeping root tip probing the spaces in the earth. She makes her way, trailing the ribbon behind her, to the high pulpit where she rises, stretching to meet the figure above. For a second the ringing stops as the glass is passed from hand to hand… and then resumes as the figure below restarts the circling finger motion.

A second part of the performance (is it a performance I am witnessing? or a ceremony, a ritual?) begins as the two women now meet at ground level to perform the final acts together. They kneel side by side, over two cast iron circular ventilation grids set into the floor, each one picking and pulling, tweaking and teasing at a pale cord laced into the framework of the cast iron. They draw out of the earth the long pale strands which are twisted and tangled, plaited and laced through the apertures of the cast iron discs, untangling, unpicking, pulling in, winding up the ribbon around small reels, until eventually the whole length is coiled, and each reel is placed flat in the centre of its circle. The women rise, collecting their ringing glasses and circling together with circling fingers, they sing in hymn-like nearly harmonies, until at last they leave the space and the ringing fades with them.

As a sharing of work, the event reflects the breadth of ideas which the pair have explored throughout the week, some of which may in time be edited, discarded, or incorporated into different work, while others may be carried forward and refined for further Creeping Buttercup performances. The richness of experimentation has resulted not only in the actions performed today, but also in drawings, photographs, poems and projections, many of which can be seen on the artists’ blog at http://creepingbuttercup.wordpress.com/ Clare Whistler has been Artist in Residence at Bunces Barn, East Sussex since 2009. One of her ongoing projects has been based around thirty wildflowers harvested there for the Seed Bank at Wakehurst and Kew. She has been inviting poets, visual artists and composers to create a poem, an image and piece for music for each flower, to be brought together in a special book. She was invited by the City of London Festival 2012 to present sixteen of the flowers as performances, in three City churches. Ellen Southern was one of the composers in the project and made Creeping Buttercup. Clare decided she would like to expand and reinterpret the piece with Ellen and the Fabrica residency seemed the right place to experiment with the initial ideas.

Making Space is an opportunity offered by Fabrica for artists to make new work, layout or document work or try something out for a small invited audience. It is a chance to test new ground, to try new ways of working and using the space in imaginative ways. ﻿