Victoriana: The Art of Revival - a-n The Artists Information Company 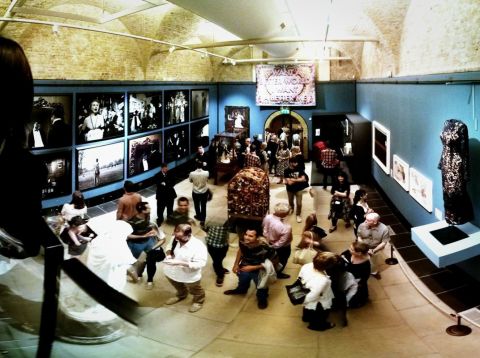 This exhibition will delight lovers of the unexpected, the whimsical and the unusual. It is the first to be held in the United Kingdom to offer a major examination of Victorian revivalism and includes twenty eight contemporary artists whose work (either in its entirety, or specifically for this exhibition) has looked back to the nineteenth century with very post-modern twenty first century eyes. Recognised names such as Yinka Shonibare, Grayson Perry and Mat Collishaw appear alongside (among others) the wonderfully sounding Neo-Victorian Kitty Valentine, Miss Pokeno and Otto von Beach. Photography, film, textiles, kinetics, taxidermy and drawing are all included in this multi-media, multi-sensory gem.

Although a haunting beauty emanates from much of the art, this is soon followed by a sense of unease and even Barnaby Barford’s animated film Damaged Goods, a love story played out by porcelain figurines on the back shelves of a bric-a-brac shop, contains a Gothic sensibility within it. This mix of the contemporary and the Gothic is also wonderfully captured in the mechanical objects of Collishaw’s Magic Lantern and Paul St George’s Geislich Tube. Along with Simon Venus’s mechanized theatre set In Two Minds, these beautifully crafted pieces could have been created in an alchemist’s workshop. Behind the thin veneer of nostalgia and fantasy, irony and politics can also be read in the work a number of artists featured, particularly in Shonibare’s Dorian Gray photographs looking at his identity as a black British man and Jane Hoodless’s commentary on the changing role of women in Victorian society in Shorn Out of Wedlock.

Surprisingly, for a vegetarian and animal rights supporter, I found the most engaging and original work came from Polly Morgan (Why Do We Wait 3), Miss Pokeno (Trophy Chair) and Tessa Farmer (Mignon, Ambushed by a Mob of Fairies), all who used stuffed animals in their work! I can only hope (probably naively) that the animals used met a natural death, but I do think there is something very noble that the status of animals such as a tiny finch, the much loved/hated fox and even bees can be raised and immortalized in a piece of fine art. If I was a betting fledging art historian, I would put money on a long and successful career for both Morgan and Farmer. Their work is very original and beautifully crafted, while still retaining an avant-garde edge. If, of course, they source their animals in any other way, then I withdraw my support and implore them to find more humane sourcing methods!

With the exception of one artist, Chantal Powell, all the artists featured had managed to engage with Victoriana so well that on some occasions their work would have sat easily in a genuine nineteenth century home or institution. Unfortunately, Powell’s work by comparison just seemed a bit lazy and naive. She had three pieces featured Siren (plastic flowers in a parrot cage), Nightingale’s Rest (an installation comprising of multiple plaster casts of cherubs on miscellaneous pieces of white painted furniture and) and another piece which so underwhelmed me I did not even write the name down (peacock feathers fixed to some form of wire grid). Compared to the other artists, Powell’s work just gave the impression of an (average) degree graduation show.

Overall though, a visit to Victoriana: The Art of Revival will not disappoint. It is a very original concept for a group show and congratulations must go to its curator Sonia Solicari, for her extremely unique vision.

Stephanie DuboisÂ graduated in 2006 from Bucks New University with a BA (Hons) Fine Art Practice, followed by a yearâ€™s post graduate study at University of Hertfordshire.Â  Currently living in Milton Keynes, Stephanie has just an MA History of Art programme at University of Reading. Her research explored the relationship between gender, ideology and culture with regard to how women artists have been inscribed into art history. Particular interests included self-portraiture and depictions of the female nude by women artists in the nineteenth and twentieth century and womenâ€™s sculptural practice in the twentieth and twenty first century. http://laughingtorso.blogspot.co.uk/