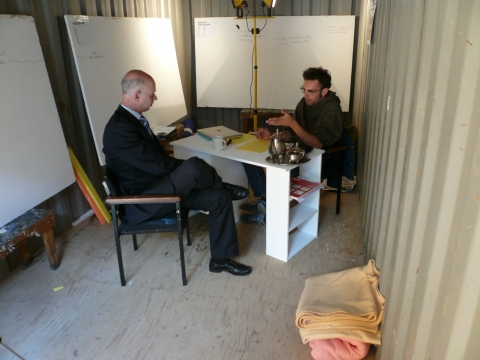 Easing my way into the festival, my attention is initially drawn to experiences which are not that dissimilar from everyday life. Some of these, like Alice Kemp’s ‘Global Electrick’ séance, work by putting an artistic frame around a recognisable experience one might encounter elsewhere. In a darkened room decorated with antique paraphernalia and old photographs, a heavily veiled, female figure slowly adjusts two overlapping very low frequency tones. Sitting in the dark watching her shadow, I wonder what I’m experiencing here: a séance, or a piece about a séance, and what the difference might be between the two. Likewise with Nicolas Galeazzi’s ‘Collateral Claptrap’, which investigates the festival’s ‘side effects’ by inviting participants into a kind of office inside a metal container. Galeazzi excitedly maintains an ongoing conversation with anyone who comes inside, analysing the themes of the festival and making lists and hierarchies on the wall. But while there is nothing which obviously differentiates this from an everyday conversation – Galeazzi doesn’t seem to be playing any character other than himself – the fact of this being framed as an art event, and of the artist’s compulsory participation in the conversation, make this experience altogether incommensurable with the everyday. As Galeazzi becomes increasingly crazed inside his small cabin, it gets harder to engage naturally with him throughout the two days, and eventually the piece seems to nearly consume itself in self-reflexive energy. By the end, the office is destroyed, broken glass is everywhere, and a dishevelled Galeazzi is wild-eyed and paint-smeared.

The lives of those outside the festival are unwittingly drawn into the festival in Holly Bodmer’s ‘I Come in Peace’. Over four and a half hours, Bodmer participates in a variety of online forums like Visual Chat and Second Life; a projection of her computer screen is cast onto the venue wall, along with the image from a camera trained at her face (even though she herself is in the room). Exchanges within the elaborate, avatar-based forums (like IMVU Chat or Second Life) tend to get bogged down in the complex range of options offered by the technology, but the simple text-based chats are a breathless and horrifying distillation of human interaction. Within Visual Chat, Bodmer accepts any invitation she receives, meaning that she often has upwards of a dozen simultaneous chats, flipping between screens as quickly as she can. Even at 11 A.M., most of the chats lead to the same thing, though some waste no time in getting there: ‘Hi you horny?’ is the opening line of one conversation. At first this feels uncomfortably voyeuristic, as strangers unknowingly expose themselves to spectators who find it hilarious – some participants even agree to spend their credits for a video chat, only to find that all Bodmer will show them are blurry glimpses of a small wooden doll. But I realise that Bodmer is not necessarily any more manipulative or predatory than those with whom she is chatting, who are just as keen to see her expose herself on their screens as she is asking them to do on ours.

Framing interaction within an experience presented as ‘art’ inevitably changes the experience, and some of the work at the festival interrogates the nature of that self-reflexive transformation. In ‘audience: a collection of silences’, Rachel Gomme sets out to record a series of shared silences, each contributor individually spending ten recorded minutes in a room with her with no compulsion to (or prohibition against) making any sound. The far from emptiness of silence is the obvious subject of her work, but so too are the dynamics of the entire interaction, which includes a contract, signed in duplicate by both parties, in which the contributor can choose to give over all rights to the recording in observance of ‘the Copyright, Designs, and Patents Act 1988 Part II’. On one level this is a permissive space, and I spoke to other participants who enjoyed the freedom of interaction without words. But for me – and this may have had a great deal to do with already knowing the artist personally – the experience was richly, exquisitely excruciating. I am used to interviews, and conversations, and recordings, but in this encounter I laid myself open for observation with nothing to offer but my passivity, with nothing to experience or reflect upon but the essence of the face-to-face meeting. In ‘Key Notes’, Richard Layzell also strips back a common interaction to its essentials, removing any intelligible content from a motivational speech and leaving only the wild energy, the self-mesmerised personality, the contagious sense of urgency. It’s a captivating, exhilarating performance, with its judicious use of Powerpoint (one slide reads ‘People’), its tautological persuasiveness (‘we’re in this together’, Layzell says, emphatically), and its mockery through exuberant embrace of jargon (such as the deadpan reference to a ‘sustainability PR company’). Rhetoric without content, engagement without direction, conviction without beliefs – it’s a devastating critique of corporate culture which would be infuriating if it weren’t also so very funny.