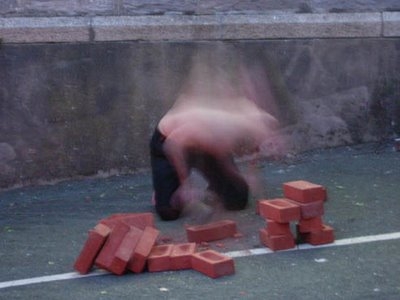 Bennett’s text piece suggests art as an autonomous zone, one in which its rituals follow their own rules and which creates its own alternative reality. This claim to autonomy underlies several other works in the festival, which derive significance from their self-asserted status of ritual. In ‘Burning and Breaking’, Nathan Walker wraps his dress shoes in paraffin-soaked cloth. While the shoes burn, Walker repeatedly breaks bricks against each other, his labour growing more desperate and violent as his muscles tire. Finally, he scrapes shards of broken brick across his bare chest – the final gesture in an angry disavowal in which the actions speak for themselves, unadorned, matter-of-fact. For ‘Free Cell, Solitaire, Golf and Pyramids’, Mark Greenwood spends hour after hour arranging playing cards decorated with movie stars, cultural icons, sports heroes, and anonymous porn models. Methodically, without explanatory gesture or illustrative frame, Greenwood creates a mandala of vice, his own mental state apparently bending and breaking under the repetitive monotony of his task. In Charlotte Bean’s ‘Third Time Luckylusting’, the self-contained ritual reaches suggestively outward in time and space. Layering slides, sound, and Super 8 film, the line between this performance event and other events begins to blur, with another ritualised event visible in the slides, and with Bean attempting to feed the film loop between her own legs. This singular event, it seems, is caught up in a trajectory of unfolding events, all of which sit outside everyday life with no attempt to establish a relationship between the two. The meaning of the ritual is the ritual itself.

The tension of referentiality comes across strongly in Rachel Parry’s ‘Baba Yaga’s Bastard Child’. Wildly costumed in shells, rags, and dreadlocks, with logs for shoes and designs painted on her skin, Parry leads volunteers from amongst the audience through a series of eerie ceremonies. Some have the lines on their palm traced in red liquid; some are sprinkled with salt or enrolled in incantations; others are encouraged to pass food and drink through the remainder of the audience. It’s not clear whether there is an intended actual effect of these proceedings – is this a representation of magic, or is it intended to be actually magical? In the theatre, we are accustomed to taking the two as interchangeable; at the same time as Live Art Falmouth, a psychic medium is playing at the town’s Princess Pavilion. And of course, some things can’t be represented without actually doing them, as in the projected video which shows pins being stuck in the crease of the hand which runs from the index finger to the base of the palm. Perhaps these theatrical spaces are the spaces we have left for the occult, the ritual, the flaunting and re-writing of reality. But when the lights come back on after Parry’s performance and we look around blinking at each other, it’s not clear what we’ve experienced. 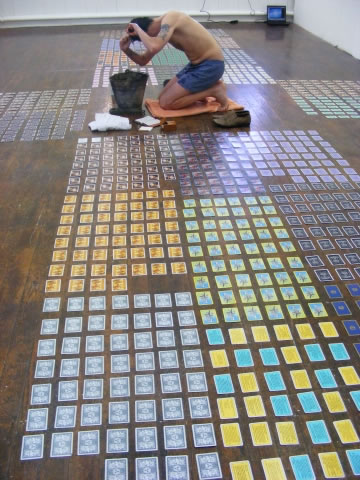