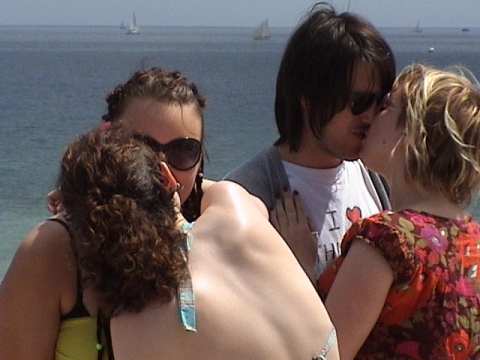 Not all of the work at the festival takes place within the confines of the hosting university building, and a few works seek to intervene in the daily rhythms of Falmouth. ‘The Park Bench Reader: My Favourite Novel’, by Bram Thomas Arnold, places a dozen or so participants at the end of the Prince of Wales Pier, where they read aloud for an hour from a novel of their choosing. A few wear badges that declare ‘Reading Novels is a form of Protest’, and there’s something provocative about the way that such an inoffensive gesture, when turned into a mass action, can generate a palpable political charge (the badges certainly help, too). But the space at the end of the pier, though symbolically resonant, feels like it is already a counter-cultural space, and so they end up reading mostly to drifters, fellow artists, and the many festival photographers. Claire Blundell Jones’ ‘KISSING III’ co-opts a much more heavily populated space, the crowded Gyllyngvase Beach in the middle of a beautiful afternoon, and has six couples kiss each other continuously for ten minutes, then disperse. Ten minutes feels like an eternity, as heads gradually turn toward the cluster of couples and a ripple of bewilderment spreads. ‘That is really fucked up,’ someone next to me keeps repeating every few minutes, unable to say anything else to his mates. ‘That is really fucked up.’

More subtle and pervasive is the ‘Sounds of the Serengeti’, by Tim Crowley, which plays African birdcalls, monkey screeches, and occasional grunting over the noise of Falmouth’s main shopping street. The sound is spread across multiple speakers, so it creeps up on the listener’s consciousness (if it is even noticed at all), and the source of the sound is hidden by the narrow street and high shop fronts. There’s an imperceptible mix between the ‘alien’ and the ‘native’ sounds of the gulls and cars, and it becomes particularly hard to distinguish the animal from the human when I walk the street late on Saturday night, the air filled with mating calls and displays of aggression.

Looking to the future

These works in public spaces raise the question of how this festival will situate itself as it develops in future years: will it focus on providing a protective environment which promotes research and risk-taking by artists, or will it aim to have a profile and impact within Falmouth itself? As Dartington College of Art’s merger with University College, Falmouth, nears its 2010 completion, what changes will evolve in the relationship between academic study, institutional reputation, and artistic practice? These questions will hopefully be answered organically, as the festival continues to develop from year to year. The affiliation of such an ambitious, wide-ranging performance festival with an academic institution is an opportunity and strength for both parties, and I hope that institutional support will continue to let the festival discover its own identity as a platform for live art in the South West. 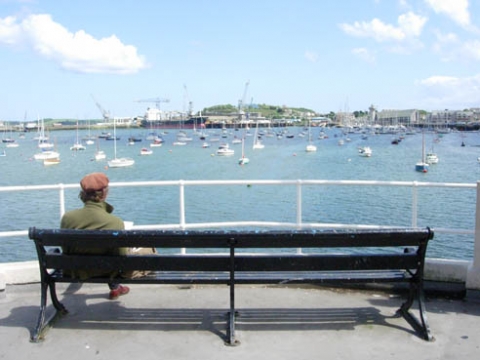