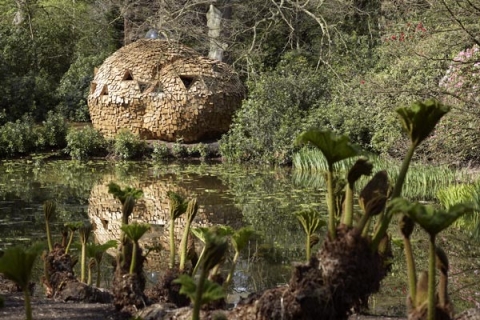 We were led straight through the orchard and various decorative gardens of the Tatton Park estate, passing by the numerous and anonymous botanical species and colourful collections of plants and flowers along the way as we headed into the woods. Arriving on a Tuesday it seemed several of the exhibits at the Tatton Park Biennial, and specifically Heather and Ivan Morrison’s I am so sorry. Goodbye. (Escape Vehicle number 4) were closed or inaccessible in some way. However it was the garden ranger who took us on our journey to the Golden Brook to find this hidden structure, deep into the grandeur of the grounds of this stately home.

And there it was, damply glistening at the side of a pond like some sort of giant misshapen wooden gourd complete with bumpy rind and domed stalk; this was a beautifully oversized pumpkin that you could go inside. Influenced by the utopian vision of west coast American communities who began to build by hand their dome shaped homes in the 1970’s, Heather and Ivan Morrison’s magical tree house deposited deep into the woods has all the vision and endeavour for perfection that Richard Buckminster Fuller himself had as he conceived the geodesic dome. A perfection that strives, as he did, to improve humanity’s condition, to make things better, and the influencer of these paradoxically flawed but perfect houses in the first place. Yet what did all this mean in the context of the pomp and showiness of the grounds of an 18th century stately home?

The ‘pavilion’ is something of a trendy term in the art world at the minute and a month doesn’t seem to go by without some sort of temporary architectural structure popping up outside a public gallery or as part of a Biennial somewhere in the world, here at Tatton there are several of these folly’s nestled amongst a permanent collection of pergola’s and glasshouses.

Nicky Coutts’s three tiered arrangement of stacked garden sheds stands proudly mimicking the traditional forms of the Pagoda that sits nearby in the Japanese Garden, a flat pack construction usually erected to store the pots and tools of the common gardener, a convenient answer to hiding that collection of crap that gets scattered around the garden and a traditional Englishman’s retreat. Yet at Tatton there are seemingly no lawnmowers or barbeques to tidy away, the mass of gardening apparatus that must be used here is carefully kept out of sight and a mere garden shed, not even three of them could house all the equipment needed to maintain these grounds. This oddly compelling tower exists to accentuate the artifice of the garden, the notion of the natural and therefore purity embedded in something that is essentially man made and orchestrated for the purpose of human satisfaction. The whole idea of the English country garden is one of synthetic imitation, the introduction of formally arranged yet incongruous elements together in essence demonstrates human-kinds overall desire to impose control upon nature.

This idea of human domination is perfectly illustrated by Paulette Phillips’ mechanically crawling ferns living in the bottom of a drained out old pool in Tatton’s Rose Garden. Like some sort of monstrous prophecy of what the natural world will become in the future, a 22nd century vision of technology fused with biology generating the ultimate domesticated plant. These hybrid solar powered Walking Fern’s are not the only species to inhabit the Rose Garden and several varieties of ferns from around the world still exist here, introduced by the Victorians, obsessed with all things fashionable. Philips’ variety however are the only ones capable of repositioning themselves to always sit in the optimum position for survival, scurrying around the pool as the sun moves throughout the day. These unnatural little fellows seemed to be able to think for themselves, restrained yet never fully tamed, they didn’t budge at all whilst we were there, however long I waited for some action on this dull and drizzly day.

Along with Heather and Ivan Morrison’s idyllic shelter built from felled trees and other impressive collaborations by Tessa Farmer and Sean Daniels, Phillips’ Walking Fern’s contribute to an exhibition that felt at times like a futuristic pensioner’s day trip or a school visit to the natural history museum rather than a Biennial of contemporary art. This however was nothing but a good thing and the setting, hovering somewhere between the natural and the fabricated, perfectly attested that our desire to increasingly adapt and modify the world for our own requirements never fully resorts to anything in the end other than imperfection. 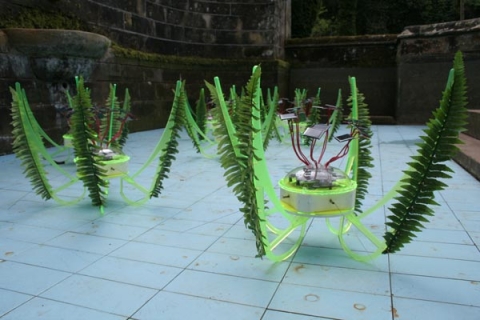