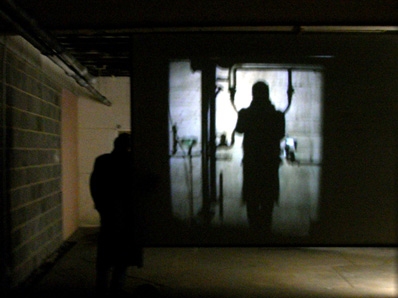 This weekend conference and exhibition, coinciding as it did with Michael Snow's exhibition at the BFI gallery, offered an unexpected and welcome opportunity to reintroduce the issue of “Expanded Cinema” into current debate around art, cinema and culture.

Expanded cinema as a term means, more or less, moving image work, i.e. films, presented in a non-cinema environment, including live cinema. But it's a slippery definition as it has tended to be appropriated by a particular tendency within the genre, the structuralist materialist tendency.

After an interminably long silence, in recent years there has been an admittedly slight revival of interest in the the notion of “expanded cinema”, with the publication of David Curtis's history of British experimental film [1], which summed up the history of the genre with special emphasis on the late 1960's – 1970s and the London experimental film scene.

Yet expanded cinema is all around us. Today we are used to seeing galleries filled with moving images, film and video, not to mention the plethora of images that surround us in the urban environment – images that we absorb and which in turn absorb us. Occasionally, very occasionally this public flow of images coincides with art [2], more often not.

The Live Record included lectures, and presentations of historical and recent experimental films by members of the London Filmmakers co-operative.[3] Duncan White gave a potted history of the Expanded cinema movement, with a sometimes-fascinating collection of rarely-seen clips of early works. I was also reminded that much experimental film making has resulted in a lot of extremely boring-to-see work. White's excavation of the history also raised questions about the documentation of this kind of practice, since at the time few thought about that – the result being for the most part very bad quality recordings (some of which took boring to a new level).

Maxa Zoller raised this issue in her lecture which looked at ways that artists today document their expanded cinema works though she admitted that this was largely in order to prepare proposals or to self-market to galleries. The issue of documentation as art practice itself was not mentioned, which I thought rather odd since, for a moving image artists, documenting a live art event gives a perfect opportunity to create another artwork!

While interesting, the level of discourse was superficial as nothing new was offered, and I'd already read the history books. I feared that the whole day was going to be more of the same. I was pleased to be wrong.

Guy Sherwin and Lynn Loo made a dual presentation – Loo gave a media introduction to Sherwin's work, which was followed by a live performance of Sherwin's Paper Landscape. First created in 1975, Paper Landscape features an 8mm film projected on a transparent plastic screen. Sherwin stood (barely seen) behind the screen and “painted in” the picture by painting it white, revealing more and more of the image with each brush stroke. The film was revealed to be a recording of himself, standing behind a paper screen and tearing away the paper to reveal himself standing in an open rural landscape. When the tearing and the painting were completed, Sherwin took a knife and cut through the polythene screen and climbed through the immediate space to the space the audience occupied.

Paper Landscape was a brilliant piece of work on many levels: it played with the idea of the projected image as skin that can be peeled away; it also marked the poignancy of the passage of time as the Sherwin of 1975 and 2008 came together as one; and it was also remarkable for the richness of the image itself, its “cinematic” quality. And lastly it showed that film with performance can be very powerful and moving, without sensationalism.

The day's event closed with presentations by two of the seminal pioneers of experimental cinema, William Raban and Malcolm LeGrice, who took very different approaches. Raban recreated in 35mm his 1972 piece, 2'45”, as 4'22” – filmed during screenings in the NFT during the previous week – a repeated frame within frame projection and live performance.

Le Grice, after an entertaining lecture full of quirky personality, brought us into another room to see his new 3-screen work, Self-Portrait After Raban Take Measure. I felt this title didn't do it justice as it was narrative, intriguing, strongly visual and above all digital. Marrying a concept – the speed of light and the time taken for light to reach the earth and illuminate objects – to narrative text and strong, immediate images, the work is very successful and, I think, progressive. LeGrice – that arch-structuralist film-maker – purported in his lecture to not understand the issue of narrative in expanded cinema, yet this new work is highly narrative and wears its structuralism lightly and is all the more profound for it.

The Live Record was an initiative of the St Martin's British Artists Film and Video Study Collection, and unfortunately this was its Achilles heel. With the best will in the world, the event felt like a university lecture, not a public presentation of cinema. It was clear that the vast majority of the people crammed into the BFI's small Cinema 3 space were professors and lecturers, or postgraduate students. The problem with this is that it felt that there was not much in the way of oppositional or unusual viewpoints, that in some sense we were all cozily here to worship historical sacred cows.

Mike Figgis and Peter Greenaway are the only two British “traditional” (i.e. Feature) film makers I am aware of [4] who are currently active in openly experimenting with alternative practices, and constantly questioning the relationship of cinema to fine art. Both are deeply concerned about their audiences, and about the broader culture of which their work is a part.

Nightwatching, Greenaway's 2008 magisterial study of Rembrandt (played by Martin Freeman), both deconstructs the idea of the mise-en-scene of a painting through the camera, and meditates on the role of the artist in a commerce driven society. Greenaway has also been actively performing live cinema. Figgis for his part has not only explored narrative structuralist cinema (Timecode 2000.[5]) and written a book on digital film-making, but is currently devoting his time to both experimenting and promotion of experimentation within the film-making community. Had Figgis or Greenaway be invited, or even discussed, it would have changed the rarefied tone and temper of the day's event.

Joel Stern of Otherfilm has said that “ it’s crucially important that avant-garde/experimental film be presented in a way that doesn’t alienate audiences. That can mean good contextualization, explanation of how the work fits historically, but it also means creating a comfortable, social atmosphere, avoiding the high-church seriousness and reverence that can make films seem ‘dead.’” [6] And I think that this is absolutely correct.

To sum up The Live Record: a fantastic history lesson but a clouded and indistinct sense of the present and the future of expanded cinema and experimental cinema as a whole. The voice very sadly missed in the day, as acknowledged by LeGrice, was Jackie Hatfield's. Hatfield was an artist – who was also a researcher and writer, but foremost an artist – whose work focused on the digital and whose research into narrative an expanded cinema was cut short by untimely death. Her writings on the subject [7] should point artists and film-makers now to undertake a reappraisal of what has gone before us, and help us to decide what may come.

2] I am thinking of, for example, Year 01's electronic billboard initiative,TRANSMEDIA, featured the work of 12 artists on a large LED video billboard at a busy intersection in downtown Toronto.

3] The London Film-makers' Co-op, or LFMC, was a film-making workshop founded in 1966 and existed until 1999. Its archives are held by the Lux.

4] Of course we can count in David Lynch and various others outside the UK.

5] An ensemble film shot simultaneously with four cameras all in one take, and also presented simultaneously and uncut, dividing the screen into four quarters.

7] Some of Hatfield's writing can be found on http://mfj-online.org/journalPages/MFJ39/hatfieldp… and her book Experimental Film and Video An Anthology (2006)

Gillian McIver is a film-maker, photographer and curator.