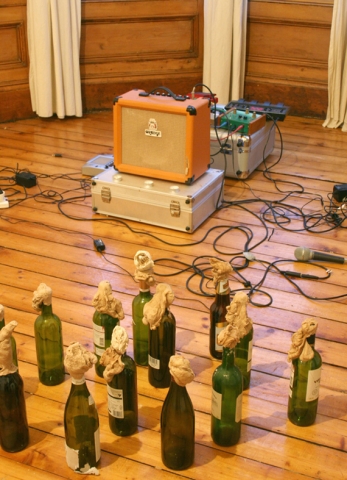 “Widows are doing it for themselves”

On a rainy December night in a flat in the West-end of Glasgow, Widows aka Jamie McNeil and Jim Colquhoun, presented a collaborative exhibition involving drawing, installation, performance, sound-works and text. This was a flat show in Jim Colquhoun’s new apartment, where he has recently moved with his daughter. Rooms have been cleared and display tables have been assembled with handmade books and catalogues for sale.

The drawings in the show contain amorphous cutting and pasting, fragments enlarged and bloated up. The bigger images have large gobs of dough thrown at them in what seems to have been an irascible irreverent assault. Some of the small drawings in the show are the apparent contents of sketchbooks, fragments of visceral thoughts, incoherent ponderings. In another part of the room “Witch bottles” stoppered by more lumps of dough, overlook an assembled jumble of wires, amps, microphones and assorted sound equipment, plenty of knobs to twiddle. More irreverence appears in the display of a drawing in the altar-like fireplace taking the shape of male piss against a wall.

“Lovecraftian horror, entropic landscapes, sonic topographies, asemic drawing and apophenic disarticulation.” Even in the ‘press release’ there is tongue-in-cheek impertinence, a grandiose appropriation of verbose language, which seems to cock-a-snoot at the usual promotional hoops that need to be jumped. The show resonates with a spontaneity of execution, arrangement and hanging that adds to the feeling of freedom, unshackled by the constraints of any art-world hierarchies, just the raw unfettered intention of ‘doing it for yourself’.

The opening showcased the sound performance “Pissing On Mirrors”, which involved both artists and Jim’s daughter Una in the creation of a spontaneous sonic cacophony using hand held microphones, transformed through Jamie’s mixing desk and sound gear. This related to previous performances but had a further dimension added through the domestic nature of the event, its intimacy and the inclusion of a six-year old child. Una’s obvious unselfconscious enjoyment of the experience at a fundamental and primal level, obviously uninhibited by any art preconceptions, gave this performance a genuine quality and raw power that many art performances lose, through the esoteric self-consciousness of this type of event. The spontaneous and feral nature of the performance was something to revel in, making it ultimately unique and probably difficult to recreate anywhere else.

Throughout the exhibition there is a constant referencing of the shortcomings of maleness, refracted through a feral kaleidoscope. Carnal instincts, masturbatory urges, animal actions, pissing and ejaculations, are given an extraterrestrial slant by the reference to “the rot of the stars” the Welsh translation of the exhibition title or “God’s spunk” as Widows would rather believe. All are thrown into mischievously sharp contrast by the inclusion of Una, during the performance.

Glasgow has a long history of flat shows, too many to attempt to mention here, all with different approaches, intensions and agendas; from Cathy Wilkes, ‘Dalriada’ in a St Vincent Cresent tower block; David Wilkinson and Charles Esche’s “Wish You Were Here Too” in a Hill Street tenament; “Pretty Vacant” a one off exhibition in an empty flat in Great Western Road; the pre-gallery flat shows of Switchspace, which became the commercial venture Sorcha Dallas; ‘Washington Garcia’ in the Southside; ‘Flat 0/1’ in the Westend; Alhena Katsof’s ‘A. Vermin’; to the recent high profile use of Douglas Gordon’s three story townhouse for The Common Guild events. Maybe it’s the genuine and spontaneous use of domestic spaces that work best, those that deal with a raw sense of urgency to just get the work on the walls, to show work that might not fit into the polished grooves of the recognized gallery spaces elsewhere in the city.

Whether this was a one-off event or the first of a series of shows remains to be seen, but one thing that’s for sure is that there will be other eruptions, unpredictable, short-lived, erratic, spontaneous. A blink and you’ll miss it, finger-on-the-pulse barometer of the creative energy that continues to bubble under the surface, fuelling and invigorating Glasgow’s arts-cene.

“Widows are doing it for themselves”