Carwyn Evans: That Morning he Watched the Dawn - a-n The Artists Information Company 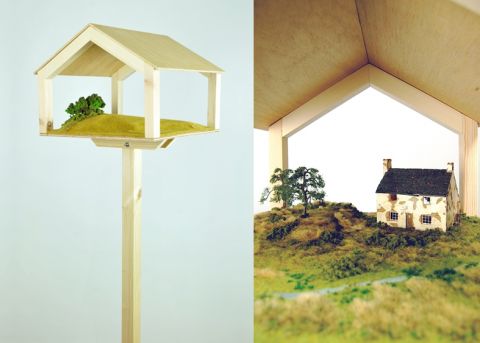 Driving down the A 470 with Super Furry Animals on the cd player, passing mountains, lambs and buzzards on the way to review Carwyn Evans’ show in Newtown. This exhibition starts before you get there. Oriel Davies is a white cube contemporary gallery showing high quality work from all over the world. It is on the edge of a beautiful park, in the same way that Newtown is simultaneously situated on the edge of Wales (the English edge), and in the middle of Wales. It’s a place people go to from north and south to meet. You drive through beautiful rural Wales; we who go to meetings all know the roads.

Carwyn Evans is a site specific artist. The place is somewhere in rural Wales, but Carwyn looks out as well as in, his coolly analytical mind is open, and he has travelled. He belongs to a new generation of visual artists in Wales, confident, ironic, but just as passionate about Wales, and nostalgic about what is still being lost, as those who have gone before.

The exhibition is spare, almost clinically bleak, with human touches. There is compassion mixed with the detachment, and rage at the lack of value for an honest day’s toil in today’s world. In the first room are wooden bird feeders containing fragments of old Wales meticulously constructed from model railway scenery; an abandoned farmhouse in a field, a section of a village, a boggy field on a slope. These painstaking models are grouped together yet isolated from each other, like miniature segments of the past displayed in a sterile space. Next to these there is a row of council houses hanging from the ceiling. The central one, made into a cuckoo clock, is the house Carwyn lived in with his parents. I wonder who is the cuckoo? On the right are drypoints of carefully observed plowed fields, engraved in lush Fabriano paper. They remind me of Bethan Huws’ delicate watercolour memories. Like her Carwyn uses cool observation mixed with obsessive attention to detail, and poetic imagery and titles.

The only photograph in this room is in black and white. It is of his parents outside their house (I know this without being told), taken from the perspective of a small child. It seems to have the detachment of Edward Hopper; without the exuberant playfulness sometimes expressed by Evans we are left with the child’s fierce desires. The photograph looks old, but it is contemporary. It is called ‘fel yr ydych’, or ‘as you are’. The English words sound like the military command ‘as you were’. I don’t know if the Welsh has the same nuance, but to me it says not only that his parents remain the same (rooted in the past), but that he retains his childish viewpoint along with his adult detachment. The only other things in this room are the cast hands and forearms of his parents, ‘offer law’ (hand tools).

The second room reflects the first, without the houses and land. For if the landscape in the first room is shrunken and fragmented, the people in the second room are without their homeland. They are in colour, therefore in the present, but have been asked to close their eyes and think of home. Carwyn turns his careful attention to their faces; he wants to see inside their heads but knows he can’t. They are Polish, like me, although I have never lived there and don’t speak the language, like so many Welsh people who either live here without learning the language, or have moved for economic or cultural reasons. The Poles are outsiders, hired hands, doing the jobs we don’t want to do, or didn’t before the recession. The ploughed fields have become vandalized second hand occasional tables, neat and careful destructive rows of work done by someone with nothing better to do and nowhere to go. It is the second room with the second class people and the second hand furniture. On screen there is an antique seed spreader, a family tool and heirloom, being operated by a faceless Carwyn dressed in his only suit, usually worn for funerals and weddings. The second screen shows the seed falling on concrete slabs; barren ground. The artist is ambivalent about the present and future, but not without hope. The scene in the second room is urban and poor, but the tables are being turned. The people in the room are named; the boy has his hand held over his head like a child who wants to answer a question in class. In the first (rural) room Carwyn is the absent child who no longer exists. In the second room the Polish child looks at us with clear eyes. What kind of world are his beautiful parents taking him into with their eyes closed? What are they leaving behind that they imagine so fondly?

We go to the café for lunch. Paul Simon is playing drearily in the kitchen, the manager is singing Kumbaya under her breath. Outside, in the park, are the tracks of a disused miniature railway. The variations in scale are disorienting. I feel as if I have travelled down through the layers of an onion, and am on my way back out into the larger world.

On the long way home I keep noticing old railway buildings. I notice the railway track that runs parallel with the road along that long valley before you get to Newtown, where it is difficult to overtake. The tufts of brwyn (rushes) in the boggy land look fake. We go through Clatter, past Clap Coch and Caersws; past the Talerddog Signal Box, a giant model in somebody’s garden. I see the beauty of the reclaimed land next to the cob at Porthmadog, and the small gauge steam train heading for Blaenau Ffestiniog. Arriving in Gwynedd I see a small graveyard in the middle of an isolated field near Dinas Mawddwy. This exhibition has added another layer to seeing Wales.

I am a practicing artist based in north Wales and employ mixed media in gallery based and site specific 3D work. My digital work includes 2D and video. I have an MA in Fine Art and teach fine art and contextual studies at the University of Wales, Bangor.