Re: Fwd: (No Subject) - a-n The Artists Information Company 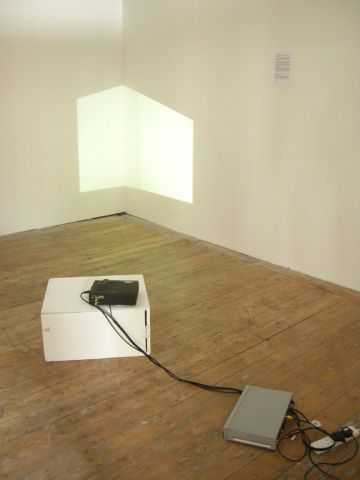 An email reaches my inbox. A trendy poster advertises a show by four artists and displays an ASCII picture of a tiger; a drawing formed from the characters on a keyboard. The show claims that four artists Simon Bruce, Richard Haw and Pietor Lock along with curator Lucy Burden, three artists from various locations within the UK and one from Berlin, have been and are collaborating using email to produce work for this exhibition. I presume from the advert that the tiger is a flavour of things to come.

Attending the show however produces a real catch twenty-two of situations. We are presented with an unknown. An unknown that declares for itself what it is, yet from the position we are in, as sceptical receivers, a declaration that receives much scrutiny.

Upon the wall of a typically bustling exhibition space is a letter, which stands solitary in the space. Inkjet printed and creased across the middle, is an A4 apology from the curator to the gallery. In it, the curator explains her excuses as to why the show has failed. It is hung carelessly with blu-tac in a vacuous room. For a show that set itself up to be established within email, it is curious that this letter is a letter, and not an email.

Evidently, that I talk of this object in a review suggests that I suspect it is not a genuine cancellation. That I apply to it the scrutiny and interrogation that any artwork would require, it is obvious that I doubt its verity. Already I view that which claims what it is not, as, what it claims it is not. Is that which is in an art gallery and is not the gallery itself, to be received as art? This sounds remarkably pretentious, yet I cannot deny the stubborn position this cancellation has taken up. It declares a failed show, yet I want to view this letter as an artistic gesture.

The presence of the text, which reveals several parts of a larger narrative, is either the frantic deliberations of an embarrassed young woman trying to shift or share the blame for this failure or it is a cleverly constructed fiction attempting to appear as the former. What does our lack of ability to believe this document say about us; that we treat its presence within a gallery automatically with suspicion, and that we don't believe what we are being told here? Evidently it seems that we do not.

If this is a staged failed show, then the gallerists choice to include a projection by one of the artists exhibiting in another room, reflects its convincing construction. If what we are faced with is a falsified letter, then its apparent convincing nature has clearly convinced the gallery directors that the cancellation is a cancellation and not an artwork.

Interestingly the decision to display the genuine text, on the behalf of the gallery, and to not write their own text, explaining with their own words what has happened, is perhaps a catty retaliation to the embarrassment the gallery might suffer from a no-show. The decision, to include the original text and to put in a compensation artwork, is a safe middle ground for them. If the letter is an artwork, then the projection emphasises its success. If it is a genuine withdrawal letter, then the projection makes up for it. The humiliating display of possibly a private letter explains the gallery's opinion of the curator who has let them down. Strangely they have both respected her and dissed her.

Curiously, what the letter claims; that the four artists who had been collaborating had fallen out, and that two of them have withdrawn from the show altogether, could also be pretence. Perhaps they all get along just fine, but wanted to stage a failing, wanted to depart the story of their fictional falling out. Perhaps this suggested failed collaboration was the result of a remarkably successful collaboration? I don't know.

Oddly it is not the truth of what has happened here that really concerns me, but the reflection that such an occurrence has upon us as viewers. It is rather obvious to say that anything in a gallery that makes a claim as to what it is will have its claims scrutinised. Yet it seems that we are torn when viewing art as it is today. We view art not as a celebrated presence, but as a represented absence. 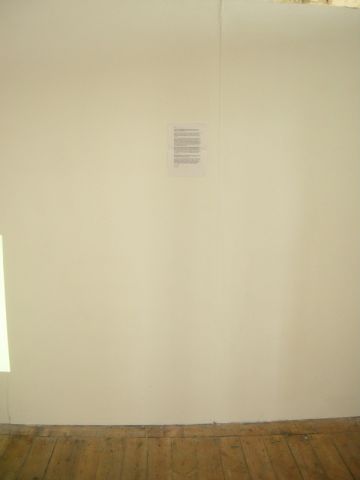 Tom Duggan is an artist and writer based in London, he is currently studying a MFA in Fine Art at Goldsmiths.