Make do and bend: the ad-hoc in sculptural practice - a-n The Artists Information Company 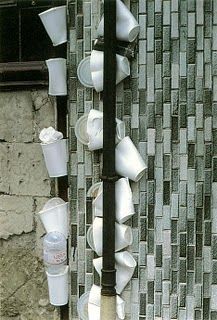 ‘Make do and bend: the ad-hoc in sculptural practice’ – A talk by Joanne Lee

This talk was held in response to Undone, the current exhibition at the Henry Moore Institute displaying ‘contemporary artists engaging with the materiality and process of making sculpture1‘. Focusing in particular on the materials used by sculptors, Undone asks what happens when the readily available and inexpensive are favoured. For a major art gallery to take on such a premise is refreshing, not least for the kinship with art school processes that it demonstrates. Giving the talk is lecturer and artist Joanne Lee, herself a self-confessed subscriber to ad-hoc sensibilities. A central reference within Lee’s discourse is ‘Adhocism: The Case For Improvisation’, a 1970’s book that regards adhocism as an essential principal of design and despite its retro appearance the message remains relevant. In the last forty years artists have continued to be both rich and poor, and have continued to create successful art whether the supposed ‘proper’ tools and means have been available or not. It is debatable where the stigma against using low-fi, or inexpensive materials has stemmed from, but putting this aside it is evident that our communal plight against the aftermath of the recession will no doubt make this trend more familiar to us. The current economic relevance of such a departure from high-priced traditional mediums and presentation methods is poignant: bronze and marble are out; branches, ping-pong balls and paper bags are in.

The spirit of adhocism is rife within the exhibition, in the readymade objects that have been used simply for being close at hand, and in the spontaneous outcomes. Highlighted from discussions between the artists in the accompanying exhibition catalogue, Lee remarks on Alexandra Bircken’s admission that she uses branches in her artwork simply ‘because they are lying around2‘. To experience Bircken’s frankness toward the practicality and resourcefulness that artists regularly employ is a relief, with her work hopefully allowing other artists and curators to see the potential this attitude can unleash. Continuing this investigation into selection of materials, Lee cites her fathers life-long career as a dry-stone waller as a prime example of this ‘make do’ attitude, comparing the necessity of having to use each oddly-shaped stone with art practice today. Shop-bought, professional materials are often surplus to the requirements of creativity and it it is evident that there are limitations in using only that which is pre-fabricated for art studio purpose. As artists, what do we do when the idea in our mind does not include only items that our art supplier stocks? The resultant creations are drawn outside of the lines and can juxtapose familiar, non-art items to make something that is still entirely original.

From the exhibition, Lee suggests Embroque 2003 by Mary Redmond as exemplifying this notion. A swatch of red fabric and a wire drying rack as its main components, the piece appears architectural in its twisted curvature, whilst the snagged material warns us of a past fleeting moment, like Red Riding Hood running past an errant fence post. Yet essentially, we are looking at that which we use and ignore daily as we stack up wet plates, and it is this that highlights the ability of the artist to turn basic materials – whether shop-bought at great expense or unearthed in the shed – into something of renewed significance. As Lee points out, some of the simplest pieces in the exhibition best embody the ingenuity that has been employed, not least Chlumpä 2006, by Franziska Furter. Repeatedly knotted nylon thread has resulted in a nodular white ball that takes on a crystallised appearance, entirely unique and intricately patterned. Joanne Lee addresses this method of making, asserting its fundamentally tactile nature and its origin as a work of human habit. This strain of adhocism is born out of inactivity, idleness, the in-between times and yet it is in these absent-minded gaps that we can allow ourselves to consider such creations from an artistic perspective.

Asked to comment on adhocism’s status as a possibly fleeting trend, Lee cites the work of Richard Wentworth that might prove its longevity. Begun over thirty years ago as an ongoing concern, Wentworth’s photo series and publication ‘Making Do and Getting By’ catalogues what might be described best as accidental sculpture. Including an abandoned polystyrene cup entirely punctured by cocktail sticks, and a mass of cups stashed behind a drainpipe presumably as an alternative to littering, these photographs capture the spontaneous if bizarre decisions that we make out of necessity. I see these images as a testament to the ingeniousness of distraction, as well as to the obvious evidence of innate human creativity. Another enquiry from the floor again reveals doubts as to the future of this enterprising spirit by suggesting that over-zealous health and safety measures could kill artists ability to recover found materials, particularly in an art school context. Herself a lecturer on the Fine Art BA course at Nottingham Trent University, Lee has experienced first hand the difficulty in regulating the use of an effectively limitless range of materials. Aware that restrictions are ever increasing, Lee stresses the importance of maintaining a balance between a freedom of materials and the avoidance of dangerous or harmful situations. It is difficult to deny however, that such limitations may unavoidably remove the sense of fun that can be found in destruction, the unexpected and the hazardous. Embodying this relationship in his own work is Ben Woodeson, who knowingly creates safety hazards as an antithesis to the accommodations usually made by artists. Lee explained Woodeson’s work Schlagbohrer (Hammer drill) 2010, whereby a tiny hammer hangs from a drill bit and when intermittently turned on wildly smashes the surface of the wall it lies against. There is something joyous in the denial of our cautious inclinations, giving us a freedom reminiscent of childhood carelessness. Admittedly, Woodeson provides disclaimers to be signed before engaging with some of his more perilous pieces, although this in itself acts as a critique of the rules it adheres to. It is probable however, that some artists purposefully remain operating outside of a traditional gallery environment in order to maintain an undiluted freedom, be it in the use of unorthodox materials or in the introduction of risk.