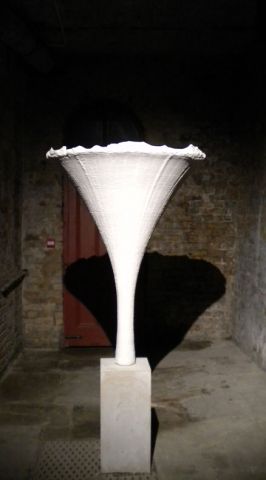 Invitation to a Freak Show

Thursday night, December 9th. Images flash across the screen: fires outside the parliament building; National Gallery occupied; royals threatened; rioters and police on horseback. I’m heading out to Shoreditch, going to see an exhibition billed – intriguingly – as “The Freaks.”

I reach my destination, a massive bit of Victorian Baroque stuffed next to the railway line where Old St meets Kingsland Road. Down the stone stairs, through an arch and a narrow doorway, and I’m in the vast underground space of the Shoreditch Town Hall.

“The Freaks Exhibition” is the brainchild of Tom Graham-Adriani, the young artist and curator, whose previous projects include the fascinating “Tales from the Electric Forest” show in spring 2009 at the St Pancras Crypt. It was one of the best shows in London in 2009. Tom has brought back many of the same artists, and added more, for “The Freaks.”

The venue’s corridors and small rooms offer a magical combination of both a fully sustained experience of freakishness, and constant frissons of surprise and wonder. One never becomes bored or blasé with each discovery, each manifestation; here the deep places of the unconscious are rendered – in paint, or paper, or other more mysterious materials.

The show is particularly interesting because of the way that Adriani has chosen artists working in distinctly figurative styles and often traditional media. It’s rare to see a show which brings so many painters and drawers together, to explore a single theme in so many startlingly diverse ways. This is not a conceptual show: every piece has been thought through and then made – into objects loaded with meaning and resonance.

With 35 artists and over 300 artworks on show, it’s impossible to justly discuss even a fair sample, but I will say that The Freaks makes the best use of this gloomy basement space I’ve seen since the exhibitions programme started. Everything is displayed to its advantage and in symbiotic relation within the show as a whole. There is much very strong work in the show, and the strength is reflected in all the principal strands of media represented.

I was seriously unsettled by Adam Wardle‘s Vision in the Bay: I am sure I have been there in a dream….

Glenn Ibbitson‘s “Claw” works – large drawings and paintings of male figures afflicted with lobster-like appendages – are poignant and moving, rather than funny; while on the other hand, Nazir Tanbouli‘s huge painting, The Union of Confused Identities, manages to be both humorous and menacing.

The great legacy of English 18th and 19th century illustration (the tradition of Blake and Beardsley, and which so inspired Goya) is a thread that runs right through this show, though every piece has a thoroughly contemporary sensibility. And what these artists are illustrating is their own psychic delving, their own self exploration. And by making these available to the audience, we are incited to participate in exploring our own dark unconscious dreams.

The exhibition theme is “freaks” yet this is anything but a freakshow. What is fascinating is the tender sympathy with which the artists treat the notion of “freak.” Here freakishness is not only explored, but nurtured and celebrated as an essential part of the human condition. As Adriani says, “our reality is only as concrete as we decide to make it.”

We need this art. As I leave the exhibition, the talk on the street is all about the riots downtown. I realise how important The Freaks exhibition is. “Cool” and irony are dead, offering us nothing anymore. Same with “sensation.” In Jungian terms, we are getting restless behind the mask of the persona, and we’re feeling the claws of the shadow, and the other archetypes, scratching at the door and we’re feeling compelled to open it. We have reached a point where we want to understand who we are, and how we – collectively and individually – have got to the situation we are in. We desire to explore the unknown psychological spaces that lurk within us, and to know ourselves.

Wandering the labyrinth of the Shoreditch Town Hall basement really does feel like wandering the length and breadth of the psyche, encountering all the shadowy beings that lurk there.

The Freaks is on until December 16th and the show includes a gallery shop.