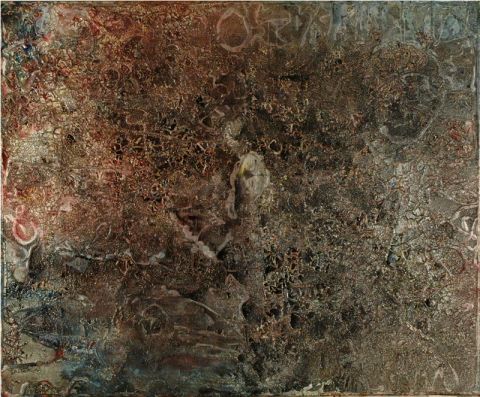 The exhibition FLAW, currently at the Bracknell Gallery, South Hill Park is a collection of works by Derek Hill, which have been created by using industrial paints, solvents and oils.

All of the works are abstract in their styling; however, influences and similarities with other art movements can be seen. The combination and mixing of the colours is reminiscent of works by the Impressionists or in Turner’s scenes of shipwrecks and stormy seas. The fluidity and tactile nature of the canvases hold similarities with work by Jackson Pollock and the top layer of glue and resin on some of the works looks very similar to automatic drawing. The connections to so many styles and techniques make the works very appealing and exciting to the eye.

The meaning of the FLAW series is very much open to personal interpretation, due to the abstract nature of the canvases. The works seem to depart from visual reality, allowing the viewer to create their own reality through using their own imagination. This makes the exhibition one that is very personal to each individual who has the pleasure to experience it.

When I first saw the exhibition, I associated the pieces with joy, colour and experimentation. However, looking closer, the works have a sombre and dark undertone. This is created by the materials used and the layers that they have created. For example, paint and oil have been used against each other but they do not sit comfortably together on the canvas, creating a slight feeling of unease and discomfort between the materials.

Derek Hill has been described as an alchemist, due to the techniques he uses when creating his artworks. However, it could be said that the works themselves are a reflection of science, not just the techniques and materials he has used. The canvases look metamorphic and some of the pieces are reminiscent of discoveries one may find in a Petri dish, or whilst looking at cells under a microscope. This idea of scientific discovery could be said to hold connotations with disease and illness, again showing a dark underlying tone in his works.

Overall, the exhibition creates a fantastic impact on the viewer, allowing them to muse over the stunning canvases, embracing their own interpretations, whilst appreciating the open-ended and very aesthetically pleasing works.