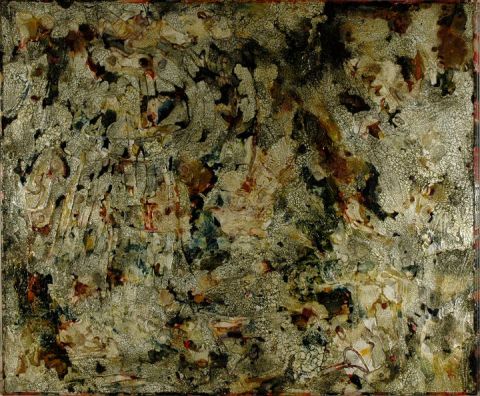 The relationship between science and art has always been a precarious one but there are artists to whom a process is more significant than the final outcome. Just such a position is where we would find Derek Hill for his latest exhibition of his FLAW series in the South Hill Park Arts Centre. Hill is familiar with the need for new processes to create work that challenges viewer’s ideas about art history or about what is important about the artworks.

Using an array of media such as solvent paints and industrial media, Hill brings together the best of both worlds as traditional oil paints also make an appearance in these dramatic, theatrical paintings. At school, in GCSE Science, students would move some containers pour some acids and stir some liquids to end up with some copper crystals but whilst Hill embodies that same curiosity, his results are vastly different. The paintings’ explosive sizes and inner detail reveal a mars-like surface idea as the paintings are constantly altering and in Hill’s own words ‘evolving’.

Painting may appear to a select few as flat or traditional but FLAW certainly discourages that mode of thinking as the works are often made by how the process allows, with somewhat pure colours resulting in purely unusual effects. Indeed an “alchemist”1 might be the preferred profession of Derek Hill and a microscope would benefit in detailing all the biological changes on the canvas. Traditional notions of aestheticism are almost non-existent save for the influence of Abstract Expressionism in his sizes and manipulations of colour but the beauty after all is in processes. Re-applying layers and layers of paint is an advantage in creating these visually stunning organic compositions.

A subsidiary influence of the colourfield painting by Abstract Expressionist painters may also be interpreted in the work for having a somewhat ‘minimal’ design on the surface, until the ever-changing mediums are granted unprecedented attention. Perhaps there are even the hints of Clyfford Still in the work’s melting canvases.
All in all, FLAW is a most enjoyable exhibition with a fascinating combination of science and art, for those with a curious disposition.

Thursdays to Saturdays 1pm to 9:30pm