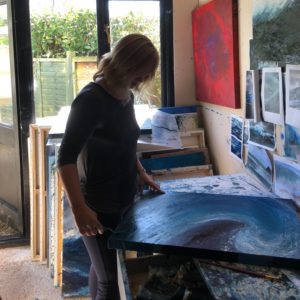 Born in Buckinghamshire, Catherine moved to Devon 15 years ago and is now based in Teignmouth, South Devon. Painting from an early age it wasn’t until she reached her mid 30’s that she went to art school, graduating with a BA (Hons) in Fine Art in 2008 at the University of Plymouth. Having visited the Torbay area annually as a child, the coastal images have had a marked affect on her work. Now drawn back to her childhood haunts the strong tides and rough seas of the Devon and Cornish coastline still inspire her work. These large waves have been the main theme of a series of oil paintings started 5 years ago that have amounted to 55 so far. The rivers around Dartmoor and long exposure photographic images of water have influence another series of paintings started recently. In particular looking at the way images are altered using this photographic technique and altering them further using another medium. She is influenced by the wave paintings of Maggi Hambling and the night paintings of Peter Doig. She is a member of the Devon Artist Network and a-n and has been recently elected an art Ambassador for the English Riviera UNESCO Geopark. Teignmouth
© a-n The Artists Information Company